October 20, 2013 / electricityclub / Comments Off on ALISON MOYET Live at the Royal Festival Hall 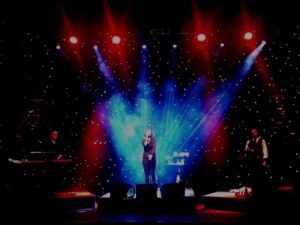 Following the YAZOO split back in 1983, If you were a betting man or woman and wanted to wager on who out of Vince Clarke and Alison Moyet would be creating the most vibrant and vital music in 2013, then the safe bet would surely be the former.

But here we are, over 30 years later; ERASURE’s ‘Tomorrow’s World’ album sounded like a FRANKMUSIK remix project and there was that announcement of what is potentially the death-knell for many a band, the dreaded Christmas album ‘Snow Globe’.

But it’s Moyet whose career and credibility has been jumpstarted with the release of the critically acclaimed ‘the minutes’. The Moyet mission statement appears to be now to a) re-embrace electronic music and experimentation, b) make music for herself (rather than fulfilling record company dictates) and c) ditch the jazz and covers, a strategy which may well alienate many of her fans, but then again delight those that yearn for a return to a sound which launched her back in 1982.

The hushed and admittedly highbrow surroundings of the Royal Festival Hall also provide a wonderful contradictory experience tonight, for those that have ever read one of Moyet’s interviews will know that she has no airs and graces and there is something wonderful about her comfortably filling a venue which normally plays court to classical and arthouse projects.

Walking into the auditorium to be confronted by an ultra-minimal stage set-up was an eye-opening start to the evening, a triptych design with stage left and stage right banks of synths and midi controllers flanking a third keyboard stand in the middle which (quaintly) held Moyet’s cup of tea, assorted towels and other refreshments.

Set-opener and the track which opened ‘the minutes’ was ‘Horizon Flame’ and immediately showcased how strong Alison’s vocals still are in the live arena, syncing with the “look at all the lights out there” line, glimmering stars illuminated the backdrop, providing an enchanting start to the evening.

From start to finish this was an ultra-confident and (in places) somewhat audacious performance, second song in and the familiar chiming synth motif of ‘Nobody’s Diary’ filled the hall, for many artists it would have been the easy option to save this track for an encore, but it was dispensed with an early airing and an arrangement that aside from having more consistent drum patterns, was comfortably faithful to the YAZOO original. 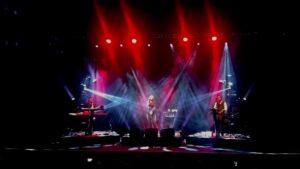 What soon became apparent was that Moyet was confident enough to take risks with some of her most well-known material so that it fitted into her new electronic framework.

This included a radical rework of ‘Raindancing’ single ‘Is This Love?’ which was re-invented in 3/4 time with added electronics and most significantly, ‘Only You’, a track which Moyet admitted on the night “had been covered so many times” that she felt that when she sang it she was “covering it herself!”.

It was with this approach that saw the song’s verses stepped down into a minor key, giving the track a much darker feel, yet still retaining the descending synth riffs of the original – the easy option would have been to give this a note-for-note rendition, so again another brave move. The deathly ‘Upstairs at Eric’s’ track ‘Winter Kills’ appeared early in the set too, the original’s piano augmented with heavier drum patterns which although a welcome fresh new twist, killed a little of the dark atmosphere of the track.

The between song banter and audience rapport was wonderfully entertaining throughout and you would have to have a heart of stone not to side with Moyet whilst watching her thoroughly enjoy her time back in the spotlight, dancing without any self-consciousness, almost oblivious to the rapt crowd in front of her watching her every move.

Such is the strength of ‘the minutes’ material, that a couple of the tracks: ‘All Signs of Life’ with its huge dubstep-infused synths/drums and the fidgety electro house influenced ‘Right As Rain’, both drew a bigger crowd response than some of the older tracks, both tracks sounding superb through the PA system and really showcasing how hi-fidelity the Festival Hall’s acoustics are. 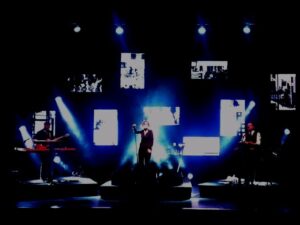 The set climaxed with an extended ‘Situation’, the first track to get the all-seated Festival Hall crowd on its feet and dancing and a three song encore was to follow.

This included an electronically re-worked ‘All Cried Out’, again with a 3/4 verse section, ‘Whispering Your Name’ from the ‘Essex’ album and the inevitable ‘Don’t Go’, again with added contemporary synth parts. It was really hard to find fault either in the setlist or the way that songs were re-interpreted during the show.

Many YAZOO fanatics would have lost interest in Moyet years ago, uninterested in the middle-of-the-road direction and tonight’s gig really hammered home what a renaissance/career revival this is. She is having the time of her life up there on stage and savouring every minute, and deservedly so… and if a certain Mr. Clarke is watching from the wings, this should serve as a reminder that it’s never too late to take risks and explore new avenues when music becomes an obligation rather than a joyful passion…

‘the minutes’ is available as a CD, vinyl LP and download via Cooking Vinyl