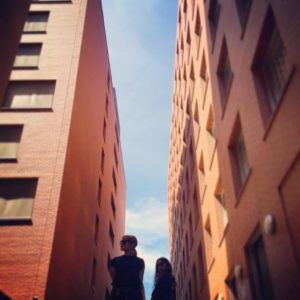 Despite the absence of new material lately, Greek synth maidens MARSHEAUX have been busy on the live circuit with a number of prestigious gigs including at Hansa Studios in Berlin and Electronic Winter in Gothenburg.

Following the success of their previous album ‘Ath.Lon’ which came out in 2016, MARSHEAUX have backtracked to 2013 for a brand new video to the song ‘To The End’ from the ‘Inhale’ album, filmed at various London locations including the city’s underground system and the trendy enclave of Hoxton.

Marianthi Melitsi and Sophie Sarigiannidou have been keeping their loyal followers happy with the digital release of ‘Our Girls On Film’, a nine track collection featuring alternate versions of songs such as ‘Heaven’, ‘Dream Of A Disco’, ‘August Day’ and ‘Sorrow’. All originally submitted to film makers for synchronisation purposes, the highlight of the set is undoubtedly a mighty cinematic take on ‘The Beginning Is The End Is The Beginning’.

Meanwhile, the girls have also made public their covers of DEPECHE MODE’s ‘Get The Balance Right’ and TEARS FOR FEARS’ ‘Suffer The Children’. 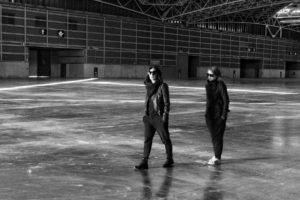 MARSHEAUX will play the W-Festival in Mont-De-L’enclus, Belgium on 18th August 2018 which has snared a selection of the highest quality acts including DAF, MIDGE URE, HEAVEN 17, D:UEL, MARC ALMOND, COVENANT, DIE KRUPPS, FRONT LINE ASSEMBLY, A FLOCK OF SEAGULLS, ALTERED IMAGES and ABC for its four day event.

‘To The End’ is from the album ‘Inhale’

is released by Undo Records, available from http://undorecords.bigcartel.com/products

‘Our Girls On Films’

, ‘Get The Balance Right’

and ‘Suffer the Children’

can be found on the usual digital platforms