October 12, 2019 / electricityclub / Comments Off on OBSESSION OF TIME Lost In Time 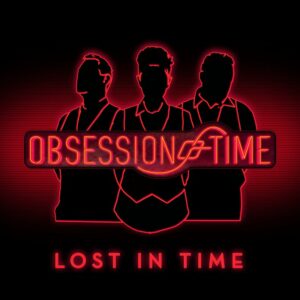 ‘Lost In Time’ is a highly appropriate title for Swedish trio OBSESSION OF TIME’s new EP.

Founded by Andreas Ohlsson and Fredrik Frostengren in 1988, they were joined by Jane Jarl and played the live circuit in southern Sweden until 1990 when real life took over and the three went their separate ways.

But in 2016, they reunited to formally record and release their old songs. The EPs ‘Time for Reflection’ and ‘Time & Space’ were the result and they eventually formed a debut album called ‘Closure’.

Returning to playing live again, most notably at the recent after show party for LUSTANS LAKEJER + PAGE in Malmö, they have finally released a completely new body of work.

The best song on ‘Lost In Time’ is undoubtedly ‘Higher Hope’, a gloriously syncopated synth number laced with bursts of melody. But its magic comes from the contrasting vocal template, with Frostengren offering a deadpan melancholic verse before a rousing Scandipop chorus from Jarl in the vein of ABBA.

‘Heartbeat’ offers a variation on the ‘Higher Hope’ theme with Jarl taking the entire lead, before ‘Runaway Dream’ plays with deeper bass moods. Meanwhile, both ‘Aspects of Time’ and ‘…and Atlas Shrugged’ take on a more robotic stance, with the latter surreally imagining Agneta meeting Vince Clarke at Polar Studios.

However, ‘The Undefeated’ is less successful being slightly too dour, but the superb instrumental ‘Spacecraft Two’ is a beautifully widescreen and cosmic set piece that brings proceedings back to the level of ‘Higher Hope’.

Conveying a truly drifting weightlessness, it also features samples of Cosmonaut Yuri Gagarin on Vostok 1 along with dialogue from several American astronauts from the final Space Shuttle Mission. A tribute to the men and women that risk their lives going into space, it’s the perfect follow-up to ‘Spacecraft One’ from ‘Time & Space’ which honoured the Apollo moon missions.

With brand new music under their belt, OBSESSION OF TIME can truly say they have got over their lost years with a modern approach they can now focus and develop on.

‘Lost In Time’ is released as a digital EP, available direct from https://obsessionoftime.bandcamp.com/album/lost-in-time

Posted in Reviews Tagged with Obsession Of Time