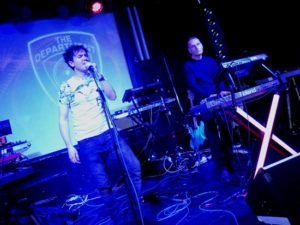 With a penchant for classic electro and new wave, THE DEPARTMENT are led by Rob Green, who is ably backed by keyboardists Magnus Lindstrom, Cliff Chapman and brand new addition Pete Dolan.

While their only album so far ‘Alpha’ showed some flashes of promise, their newer material points to a more cinematic presence as with the Phillip Larkin inspired ‘This Be The Verse’.

Enthused on-stage and off, Rob Green took time out from a mixing session in the studio and chatted from THE DEPARTMENT…

THE DEPARTMENT have expanded the live line-up to three synth players now… so you just can get enough?

Hahaha! ouché!!! That wasn’t on purpose but I think the 3 synths will give us a bigger sound. Pete Dolan who is very talented on the keys joins us on his Prophet 12, along with the present line-up of Cliff Chapman on Roland JX8P and Magnus Lindstrom from Sweden’s MR JONES MACHINE on Waldorf Blofeld.

How is the next release coming along? What form is it likely to take? EP or album etc?

The songs are there, it’s just a question of time!!! We’ll get the EP out before summer as soon as I get some spare time away from mixing records for other artists, which is becoming one of the main strings on my bow.

Now you’ve had some distance, how do you look back on the debut album ‘Alpha’ and what it achieved?

I’m proud of that album, and we’ve now sold almost all of the CDs that were pressed. It was a limited edition of only 300 copies and there’s only 15 left. One of the tracks from the record was played on Radio 6 Music which gave us a better reach earlier on and got people down to our first gigs, though I would have hoped for more national radio play TBH.

I’m pleased that the record connected with people though, I’ve had some lovely comments about what the songs mean to people. ‘Alpha’ was exactly what I needed to do at the time as I’d always wanted to make an album about my life experiences.

The term ‘synthwave’ is getting bounded about a lot, so what you see as its definition?

Synthwave as a term has been coined since the 1980s to describe underground synthpop with a new wave feel to it. I figured that as the word ‘pop’ has a stigma attached to it for some, why not dig up the term synthwave, although the term has been hijacked in recent years to describe modern electro inspired by 80s movies.

What are the newer artists who you see as fitting in with this philosophy and what do you hear as being special about them?

Artists like THE MIDNIGHT, NEON LINES and THE FRIXION, have a verve that stems from the 80s in a way, but in fact is quite modern – it’s almost like a continuation from the work that was going on back in the 80s, in an alternate universe where acid house never happened. That’s quite interesting and cool no?

THE DEPARTMENT will be joining NINA at the Retro Future Festival II taking place at London’s 229 in July. Do you feel any affinity with the organisers Outland and what they’re doing?

I love the fact that the Retro Future Festival and Outland guys are doing such a great passionate job and have upped the game. The more the merrier as far as I’m concerned. More events and better events are only beneficial for this movement and I’m not at all competitive with them. We all work together for the good of the scene, as it should be! 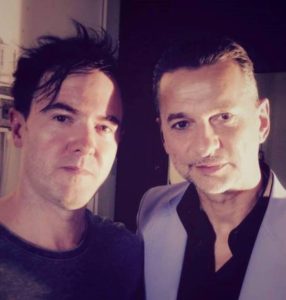 How do you see live music within the electronic field at the moment and that perceived void between live bands and DJs?

I think some electronic artists could maybe up their game live. Personally I don’t see standing behind a laptop as being a true live gig but hey, this is the 21st century!

As a DEPECHE MODE fan and having met Dave Gahan, what’s your take on the varied reactions to the ‘Spirit’ album and the ‘Global Spirit’ tour?

ELECTRICITYCLUB.CO.UK gives its warmest thanks to Rob Green

‘Alpha’ is still available as a CD or download from Hard Cell Records at https://hardcellrecords.bandcamp.com/album/alpha