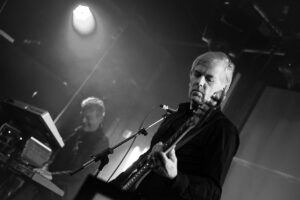 Featuring a range of musicians from original Some Bizzare trailblazers and prog synthpop veterans to various musical descendants of Mute Records, things all came nicely together for a varied but coherent bill…

With a stage set comprising of TV monitors and glowing projections directed by Outland VJ Will Cunningham, THE DEPARTMENT opened Synth Wave Live 3 by performing tracks from the recently released ‘Pressure’ EP, a body of work channelling a midlife angst with observations on narcissism amongst its subject matter. 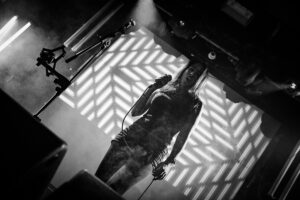 Following on was the stunning Parisian presence of YS ATLOVE who began her set with the danceable Europop of ‘Back To Yesterday’.

With her alluring stage manner and appealing nouvelle vague disco, she also presented her cover of ‘True Faith’, NEW ORDER’s paradoxically radio friendly tune about narcotic dependency, and prompted the first audience singalong of the day. Meanwhile, ‘You Can’t Fool Me’ revealed her moodier side. 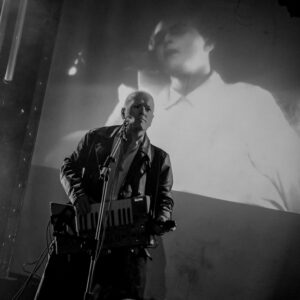 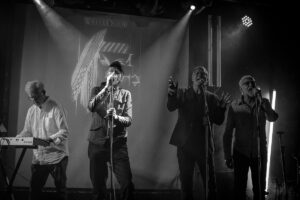 Although Baeckström is unashamedly candid about the influence of Vince Clarke on his music, another lesser known facet to his sound is that of prog synth trio WHITE DOOR who released their only album ‘Windows’ in 1983.

Having covered ‘School Days’ and ‘Jerusalem’ as B-sides, Baeckström invited Mac Austin, John Davies and Harry Davies to join him on stage for the first live rendition of those songs featuring the original band for 35 years. 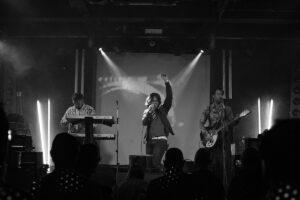 The wild cards of Synth Wave Live 3 and the youngsters of the event, synth assisted post-punk trio CENTRE EXCUSE offered some exuberant energy to proceedings.

Comprising of Teddy Lewis, Alex Rush and James Caine, their sound can be best exemplified by the single ‘Let It Ride’ which combines THE CURE and guitar driven NEW ORDER with elements of Britpop and occasional synthesizer textures. 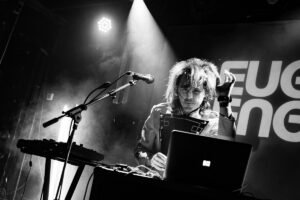 Hailed within the Synthwave community, the charming Italian EUGENE gave a superbly energetic performance with a passion and physicality that was the antithesis of the static laptop boys associated with that scene.

With his love of European synthpop, there were tunes, vocoders and uptempo rhythms too, particularly during the superb ‘HR Diagram’ with its inherent danceability and the Casiotone driven ‘Promenade’. 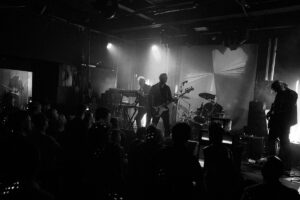 However quality numbers like ‘Polar Opposites’, ‘Moles’ and ‘Institution Walls’ performed tonight only highlighted how their music has stood the test of time.

There was a slight technical glitch during ‘Welcome To The Shrink’, but things got back on track with the synthetic chill of ‘Stalingrad’, a single as good as anything B-MOVIE did in their creative prime when they were considered to have more potential than SOFT CELL. 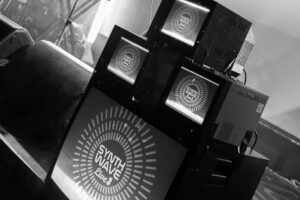 Closing proceedings were LUCKY+LOVE from sunny Los Angeles. With a new album ‘Transitions’ just unleashed for public consumption, April Love’s vocal enthusiasm could not be doubted on during their brooding set.

The duo’s indie darkwave soundtrack was a fitting backdrop to finish Synth Wave Live 3 as Electrowerkz transformed itself into the long standing resident Goth club night Slimelight and the regular clientele drifted in. 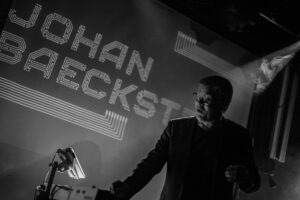 ELECTRICITYCLUB.CO.UK really couldn’t have put it much better itself ??

With thanks to Rob Green