10 Years of ELECTRICITYCLUB.CO.UK – ANOTHER ANNIVERSARY RETROSPECTIVE

March 17, 2020 / electricityclub / Comments Off on 10 Years of ELECTRICITYCLUB.CO.UK – ANOTHER ANNIVERSARY RETROSPECTIVE 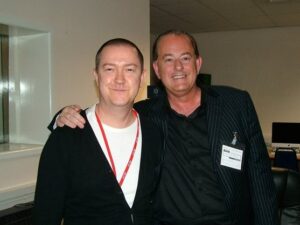 I had known Chi Ming Lai previously via another now defunct website which I used to contribute a variety of bootleg remixes of THE HUMAN LEAGUE and DEPECHE MODE. Once we were on each other’s radars and had moved on, I was very flattered when Chi asked me to start contributing to ELECTRICITYCLUB.CO.UK.

One of the first pieces I did was an interview with ADAMSKI in 2012. Looking back, this was one of the most nerve-wracking things I’d done and completely out of my comfort zone at the time. This was primarily because a) he was a bit of a musical hero of mine as a previous band I was in had covered ‘Killer’ and b) I was faced with the proposition of trying to interview the guy over the phone and then record it using a mobile digital recorder (untried technology for me).

Despite his mobile signal dipping in and out (as he was ambling around London at the time I interviewing him) and the batteries running out on my recorder half-way through, the interview went well and I got a huge sense of achievement once the piece had been transcribed and eventually published. 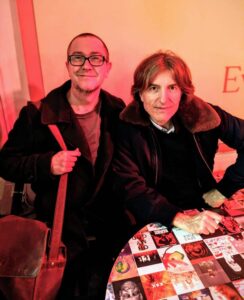 The main enjoyment I get from occasionally contributing to the site is the ability to interview bands and people within the scene, Chi has kindly put some interviews my way including WANG CHUNG, SHRIEKBACK, KOSHEEN, CHICANE, WRANGLER and CREEP SHOW as well as two of my own personal favourites John Foxx and Ulrich Schnauss. Having the platform to interact with these kind of artists is mind-blowing for me, especially the ones who I have admired and in some places influenced my own musical development. My other approach and contribution to the site is tracking down (some may call this stalking!) artists via social media and approaching them with a view to ELECTRICITYCLUB.CO.UK featuring them in its ‘Missing in Action’ series.

Although a bit hit and miss as some artists don’t always respond when messaged, it has borne fruit with many artists accepting and using the opportunity to reflect and look back on their tenure in the music industry.

In terms of the people I’m most proud of ‘snagging’ in this manner are Scott Simon (OUR DAUGHTER’S WEDDING), Dave ‘Dee’ Harris (FASHIØN), Jerome Froese (TANGERINE DREAM) and Rob Dean (JAPAN). Because of the big interviews already done on the site by Chi, I find that this gives a lot of traction when cold approaching these kind of artists. 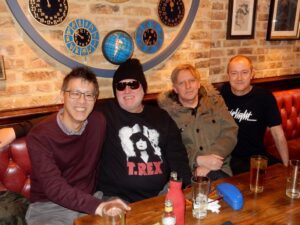 However, the icing on the cake was when Chi and myself spent a glorious few hours in a Liverpool Street pub with Stephen Singleton and Mark White from ABC and VICE VERSA. Getting this interview was a long process which started when Stephen contacted me in 2015 with regards to reviewing the VICE VERSA box set; this led to linking up with Mark and after a long period of negotiation and Facebook messenger chats, a face to face interview in 2019 with lots of laughter.

For me this has definitely been my highlight of ELECTRICITYCLUB.CO.UK and although the transcribing of the interview was one of the longest processes I’ve done (the guys LOVED to chat!), the sense of achievement upon completion was huge.

Moving away from the artists themselves and onto electronic synth music itself, Chi and myself have quite differing tastes in music, but with enough crossover that we can still happily work together. The material I favour tends to be male-fronted, often dance-inflected and also with elements of guitars thrown into the mix (see BATTLE TAPES, MAPS, MAN WITHOUT COUNTRY and SPLEEN UNITED). 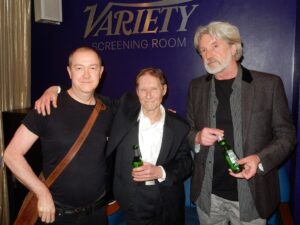 If you are a reader of the site, you won’t be surprised to hear that along with the other ELECTRICITYCLUB.CO.UK contributors, I continue to be disappointed with the lack of decent UK based synth acts and the exposure that so many second-rate bands continue to get. For a country that has such an amazing heritage of electronic music (like DEPECHE MODE, YAZOO, THE HUMAN LEAGUE, EURYTHMICS, OMD… I can go on), why is it that there are so few acts of quality which are continuing the tradition of these incredible acts?

What grinds my gears the most is the complete lack of emphasis on quality vocals that some UK synth bands have; for many it appears that once a synth backing track has been made, the process of adding vocals is treated as an afterthought. Very little attention is paid to crucial things like tuning / character / lyrics, all traits which have made vocalists such as Alison Moyet and Annie Lennox titans in their field. Whether this will improve and we will get another CHVRCHES or MIRRORS is doubtful, but I live in hope!

Although the original music that I write and produce (J-Pop / K-Pop) isn’t the kind of thing that ELECTRICITYCLUB.CO.UK would champion, it still features a lot of electronics and I have been fortunate to have had success with some major Japanese artists including ARASHI and E-GIRLS (who covered YMO’s ‘Rydeen’). 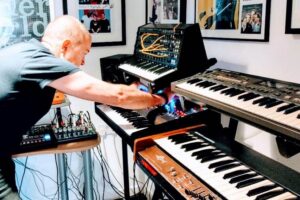 I continue to write and produce for this market which is great fun. I continue to enjoy performing live as well in various cover bands.

Signing off, ELECTRICITYCLUB.CO.UK has been a wonderful platform for me and has enabled me to interact with many of my musical heroes and also review some of their work too, long may it continue…