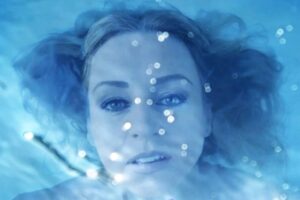 Having boosted their profile with the house-laden remix by Vince Clarke of ‘Automation’, Irish trio TINY MAGNETIC PETS are back in their usual territory with a new single from their third album ‘Blue Wave’ which was released earlier this year.

‘Drowning In Indigo’ is a wonderful atmospheric set piece with an understated electronic template that affirms “nothing is rose tinted”.

A reflection of the song’s isolated genesis during the 2020 lockdown, the accompanying video sees front woman Paula Gilmer underwater where “every colour turns to a shade of blue”. Despite the TINY MAGNETIC PETS front woman looking radiant while blending with a software genreated production illusion, the visual does make for slightly uncomfortable viewing, highlighting the darker narrative behind the lyrics.

For an album recorded largely in isolation and remotely, ‘Blue Wave’ does capture a unified feel and is very immediate; fittingly, a  sea blue coloured vinyl LP edition is due in November. But the record was a surprise release as a long player called ‘The Point Of Collapse’ was due as the follow-up to 2017’s ‘Deluxe/Debris’, with tracks having been showcased live over the past few years.

So while there are other tracks such as ‘Echoes’ and ‘Falling Apart In Slow Motion’ already recorded and in the vaults, waiting to see the official light of day, ‘Drowning In Indigo’ will come accompanied with a bundle of remixes.

‘Drowning In Indigo’ is from the album ‘Blue Wave’, available as a sea blue coloured vinyl LP, CD and download via TMP / Vitamin C Records direct from https://tinymagneticpets.bandcamp.com/album/blue-wave