October 23, 2015 / electricityclub / Comments Off on GARY NUMAN The Pleasure Principle Live at The Forum 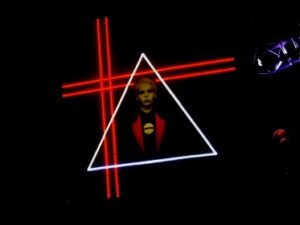 Fresh from receiving Q Magazine’s ‘Innovation In Sound’ award from previous recipient JEAN-MICHEL JARRE last week, GARY NUMAN performed ‘The Pleasure Principle’ on the second night of a three day residency at The Forum in London which also revisited ‘Replicas’ and ‘Telekon’.

While ‘Are Friends Electric?’ was the breakthrough hit, for many ‘The Pleasure Principle’, nominally as the first GARY NUMAN album.

It introduced many listeners to synthesizers and the rather disturbing vision of a dystopian future at the height of The Cold War following ‘The Winter Of Discontent’. But for all the paranoid android imagery of Numan, the No1 single ‘Cars’ confirmed that electronics were now fully part of the pop mainstream.

With no guitars, ‘The Pleasure Principle’ was a unique sounding album as the rock dynamics that would normally be expected from power chords and solos had to be achieved by necessity, using Polymoogs and Minimoogs. 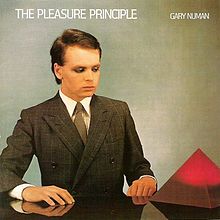 Despite all the incumbent machinery and ban on guitars, ‘The Pleasure Principle’ rocked with a flesh and blood rhythm section in shape of Paul Gardiner and Cedric Sharpley, both now sadly departed from this world. Without bassist Gardiner recognising Numan’s talent and being prepared to take a backseat in TUBEWAY ARMY to allow Numan to become singer and chief songwriter, the former Gary Webb may well have remained a van driver at WH Smith for a few years longer! Meanwhile Sharpley’s drum breaks on songs like ‘Films’ made a big impression on Urban America, particularly with AFRIKA BAMBAATAA who later collaborated with Numan.

The influence of Numan’s music on artists as diverse as NINE INCH NAILS, MARILYN MANSON, FOO FIGHTERS, SMASHING PUMPKINS, BASEMENT JAXX, ARMAND VAN HELDEN, LITTLE BOOTS and SUGABABES has more than reinforced his artistic legacy. Meanwhile, the upcoming JEAN-MICHEL JARRE collaboration on ‘Electronica 2’ is further proof of the respect his fellow musicians continue to show for him. 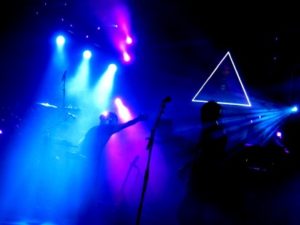 After the barrage of Goth metal that followed ‘The Pleasure Principle’ showcase on the previous 30th Anniversary tour in 2009, Numan made an announcement via social media that nothing from after 1980 would be played for these 2015 performances.

It made for an intriguing evening that revisited Numan’s imperial phase, a period in which he scored three No1 albums and won Best Male Singer at the British Rock & Pop Awards, the then-equivalent of The Brit Awards.

Although panned on its original release, ‘The Pleasure Principle’ has now been rightly hailed as a landmark album. The ‘Low’ inspired overture of ‘Asylum’ and the glaring instrumental ‘Airlane’ opened proceedings, but from the moment ‘Metal’ began, it was obvious that this was to be a rocked up interpretation of ‘The Pleasure Principle’ with guitarist Steve Harris taking a prominent role. And the format was repeated on heavier numbers such as ‘Films’, ‘M.E.’ and ‘Engineers’.

But when Gareth Thomas’ fine soft synth representation of that era’s classic Polymoog was allowed to reign unhindered, as on the buzzy octave laden ‘Observer’ and progressive futurism of ‘Conversation’, things did sound rather magnificent. The album’s two singles ‘Cars’ and ‘Complex’ were saved until last, the latter providing an esoteric close to ‘The Pleasure Principle’ section of the show.

The second half of the evening was a reminder as to why Numan was once the UK’s biggest alternative pop star in the UK, a pioneer who single-handedly flew the flag for the synthesizer worldwide. The evergreen singles ‘Down In The Park’, ‘We Are Glass’, ’Are Friends Electric?’ and ‘I Die: You Die’ were all present and correct. But representing the Sci-Fi angst of ‘Replicas’ and the lonesome paranoia of ‘Telekon’ were respectively, ‘Me! I Disconnect From You’ and ‘Remind Me To Smile’. Both cult electronic rock anthems that should have been singles, they drew some of the evening’s biggest cheers. 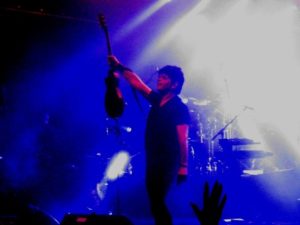 For the encore, there were two numbers from TUBEWAY ARMY’s electro-punk ‘Blue Album’ debut to finish. The ambiguous heavy metal of ‘Friends’ and the WIRE aping snarl of ‘My Shadow In Vain’ provided a fitting bookend.

Overall, it was a rugged performance and despite the odd fluffed cue, it was an entertaining and enjoyable retrospective evening. Head banging like a trooper and smiling away to both the band and the audience, Numan appeared to be rather enjoying the occasion.

Although the Moogwave of ‘Listen To The Sirens’ was not aired, its lyric “Mr Webb, there is no way out” is strangely indicative of Numan’s current position; like it or not, no matter what he says about how he despises nostalgia, he will never truly be able to disassociate himself from his glorious past.