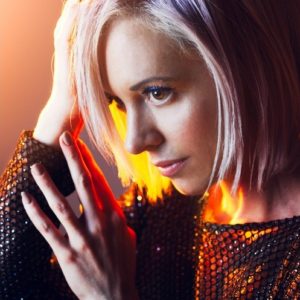 The Adirondack Mountains in Lake Placid is at the heart of the beautifully gentle soundtrack of I AM SNOW ANGEL.

The self-produced vehicle of the now Brooklyn based singer / songwriter Julie Kathryn, despite the sedate nature of her debut long player ‘Crocodile’, the mix of electronica and Americana Noir has been quietly subversive… after all, it’s not every day someone attempts a countrified drum ‘n’ bass cover of BRUCE SPRINGSTEEN’s ‘I’m On Fire’!

But I AM SNOW ANGEL has not just been about off-the-wall reinterpretations.

From her self-titled debut EP, ‘Let Me Go’ was a Nordic styled tour de force that was rich in understatement and swathed in melancholy. Album highlight ‘Come With Me’ reimagined THE CARPENTERS produced by William Orbit while there was also the gentle vibey shuffle of ‘Fallen Angel’ and the more overtly percussive electro / Country + Western hybrid of ‘Turquoise Blue’. Then there was of course, the marvellously dreamy ‘Crocodile’ title track which was released as the album’s lead single.

Although comparable to Imogen Heap, I AM SNOW ANGEL’s template is quite distinct from most electronic based pop music. Julie Kathyrn kindly spoke to ELECTRICITYCLUB.CO.UK about her musical world of icy landscapes and crystalline hydro basins…

Your musical roots have been in Americana Noir, so what led you want to work in a more electronic sphere?

It actually happened organically. A few people had encouraged me to start producing my own tracks. When I did, they turned out much more electronic than anything I had done in the past. 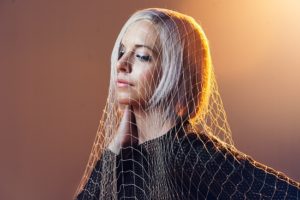 Were the any particular acts that influenced you in this direction?

I was definitely influenced by THE POSTAL SERVICE. ‘Give Up’ is one of my favorite albums. The songwriting and the production are amazing. There were also a handful of semi-electronic artists I was listening to when I recorded this album — including PHOSPHORESCENT and THE XX.

How has the technology changed your approach to composition?

Sometimes I still write with just a guitar or keyboard. But now I often begin songs with the programming first, and then let the lyrics and melody develop as part of the production process. It’s been fun to mix it up.

What types of VST have you particularly enjoyed using?

On the ‘Crocodile’ record we definitely used a lot of plugins. Sound Toys Echo Boy and Air Vintage Filter are two favorites. 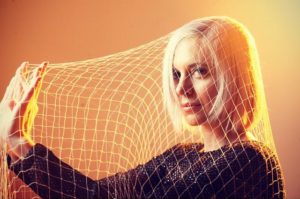 You use vocal processing treatments too. What would you say to observers who say singers should keep their voices pure and free from things like Autotune?

With this type of music, I think processing is part of the aesthetic. For example, I really like “glitchy” sounding backing vocals — especially when they’re understated, almost like instrument sounds. I’m not sure what I would say to people who are anti-processing. To each his own!

Despite the use of electronics, your music still maintains a distinctive American twang for a unique and quietly subversive sound… have you any thoughts on this?

I was raised in Lake Placid, which is in Northern New York. It’s a rural area, in the mountains. I grew up singing folk music. I can’t erase my country roots, even though my sensibilities have changed since then. Musically I’m kind of a hybrid.

When you first appeared as I AM SNOW ANGEL with the self-titled EP, it appeared to possibly be a one-off experiment? Was that how you saw it?

I wasn’t sure what would happen. Yes, it was kind of an experiment, but I quickly became really invested in it. And now I’m basically addicted to writing and producing music in this genre. 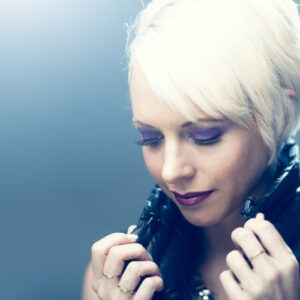 ‘Let Me Go’ from your first EP could be interpreted in many ways, do you think it suited a more synthetic treatment than perhaps a traditional one?

Well it’s actually a spiritually oriented song, as you might have gathered from the lyrics. I wrote it as more of a hymn, but to my surprise the electronic production worked really well. It feels very wintry and ethereal.

With artists moving more towards recording EPs, what inspired you to undertake a full length album?

I had a lot of songs and I really wanted to put them out there. And I liked the idea of creating a longer narrative.

The album is called ‘Crocodile’, why is that and what is the title track about?

I wanted to explore the dynamic between predator and prey. There aren’t many songs about this. On the surface I was describing a crocodile stalking its prey, but I meant this as a metaphor. At the end of the day, I think humans are basically governed by animal instincts, even though we pretend to be logical and reasonable. For me this song felt like the right opening track for the album — ethereal, breezy, otherworldly.

‘Walking On Wires’ has hints of THE POSTAL SERVICE?

Yes! Especially the percussion and the fuzzy bass sounds, and the subdued, under-emotional vocal delivery.

What are your own favourite songs on ‘Crocodile’?

‘Fantasy Fiction’ is definitely one of my favorites. I feel very connected to the song’s dynamic build and rhythm. I also like ‘Walking On Wires’. I really pushed myself musically, and I’m happy with how it turned out. 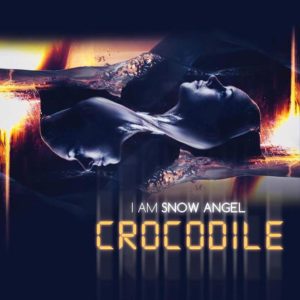 To close ‘Crocodile’, you covered BRUCE SPRINGSTEEN’s ‘I’m On Fire’ in an esoteric drum ’n’ bass style. How did this idea come about and what has the general reaction been to it, especially in the US where some synthobic attitudes still exist?

I think people like it! The original song is so eerie and organic — one of my favorite tracks of all time. Mine is definitely very different from the original, but I think that’s a good thing — it’s a devoted re-interpretation, not necessarily an imitation.

Of course, people tend to forget that The Boss’ ‘Born In the USA’ and ‘Tunnel Of Love’ albums are in their own ways, quite synthy…

That’s so true! He’s considered to be very rootsy / Americana now, but he had plenty of electronic sounds in his music in the 80s.

So what’s next for you, either as Julie or I AM SNOW ANGEL?

I’m recording more I AM SNOW ANGEL tracks right now, actually. I can’t wait to share them with you. And thank you for chatting with me!

ELECTRICITYCLUB.CO.UK gives its warmest thanks to Julie Kathyrn

Thanks also to Julie Rene Tran at EiPR

and the ‘I Am Snow Angel EP’

are available via Amazon, iTunes and the usual digital outlets