August 20, 2012 / electricityclub / Comments Off on Introducing SIN COS TAN 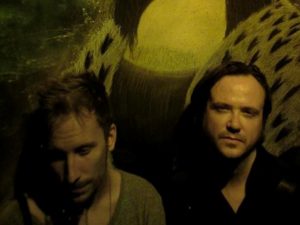 Having worked together previously on VILLA NAH’s superb debut album ‘Origin’ and on the track ‘Re: Last Year’ from Hulkkonen’s own ‘Man From Earth’ solo record, a further artistic union was almost inevitable. The duo made their live debut at Helsinki’s Flow Festival this summer.

Their first offering ‘In Binary’ will not be a complete surprise to anyone who has loved either VILLA NAH or PROCESSORY, Hulkkonen’s project with Jerry Valuri. With a stylish video by Pyry Lepistö, Juho Norokytö, and Matti Ranki, the track is an atmospheric amalgam of the two although probably biased more towards the futurist space ballads of the latter’s ‘Change Is Gradual’ album.

The superbly pulsating ‘Trust’ though is perhaps more VILLA NAH, and showcases the pair’s manifesto to be “a synthesized duo of great promise, broken dreams, and long nights”.

Add in sweeping drifts, sharp widescreen cimbalom, danceable but subtle beats and emotive vocals tinged with sadness from Paalosmaa, what more could you want? Haunted by the ghost of the late Billy MacKenzie, ‘Trust’ could possibly be the song of 2012…

So while VILLA NAH take a sabbatical and Hulkkonen wears yet another hat (other monikers have included ZYNTHERIUS, ACID SYMPHONY ORCHESTRA, KEBACID, DRUMMAN, STOP MODERNISTS and THE TANIA & JORI CONTINENTS!), SIN COS TAN are finishing an album for forthcoming release.

Posted in Introducing Tagged with Jori HulkkonenSin Cos TanVilla Nah