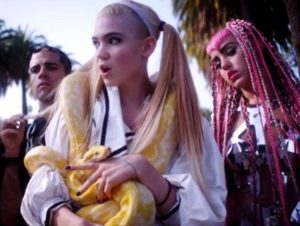 Montreal’s GRIMES aka Claire Boucher seems to be sending blogland and the YouTube comments page (not known for its heights of intelligencia) into a state of frenzy with her promo video for ‘Genesis’.

Directed by Boucher herself, the young Canadian could be forgiven for thinking: “Pretentious? MOI?”. But her wry smiles seem to indicate that this, like AUSTRA’s video for ‘Spellwork’, is not to be taken that seriously as Boucher and pals have rather a lot of fun in the Californian desert.

Driven by a Klingklang styled rhythm section, the song’s pentatonic scaling show GRIMES’ affinity towards South East Asian culture; indeed the striking pink haired character played by Brooke Candy could have walked straight out of an Anime series. And judging by the baseball cap Boucher wears at the beginning, she likes cats…not to be left out, the video also features snakes!

From the critically acclaimed album ‘Visionss’, ‘Genesis’ is one of several kookily inventive tunes including ‘Oblivion’, ‘Be A Body’, ‘Colour Of Moonlight (Antiochus)’ and ‘Vowels = Space & Time’ that will provide a rewarding listen to those prepared for the aural challenge of some hybrid electro influenced by K-Pop, New Age and RnB.

‘Visions’ is released by 4AD Records in the UK