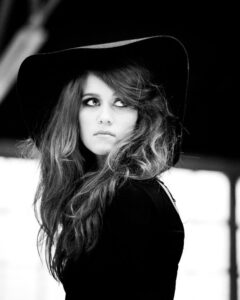 Jade Williams got her stage name from a part time job she had in a pet shop where she was known simply as SUNDAY GIRL.

So is she a Pet Shop Girl?

No, she hints at something much darker although the suspicion that’s she’s just a model trying her hand at a pop career still looms. But her new single ‘Stop Hey!’ is kooky and stylish avant pop.

Overdriven drum sounds and a piercing trebly riff dominate this piece of icy Eurocentric electro, sounding not unlike ELLIE GOULDING with a 20 cigarettes a day habit backed by MIRRORS and MGMT!

Her 21st Century cover of RAF’s ‘Self Control’ which was made famous by LAURA BRANNIGAN was pleasant but inconclusive as was her folktronica debut single ‘Four Floors’. However, Miss Williams does have some superb songs from her forthcoming debut album waiting to be unleashed.

Of those, ’24 Hours’ is wonderfully claustrophobic post-punk with hints of early Factory Records while best of all, the brilliant ‘All The Songs’ and its moodier percussive pace is powered by pulsing electronic bass and layers of vibrato synth tones.

This is music to crumble to while smoking a Gauloises alone in a Paris cafe. So could SUNDAY GIRL be Hertfordshire’s answer to EMILIE SIMON? Peut-être! Qui Sait?