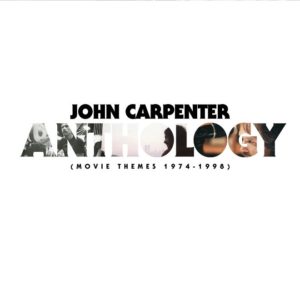 In terms of his importance in regards to the timeline of electronic music, JOHN CARPENTER often gets overlooked in favour of the usual suspects like KRAFTWERK, DEPECHE MODE, THE HUMAN LEAGUE et al.

Carpenter was unique in that as well as directing his movies, he usually scored them too.

And in his canon are a huge range of influential works, ranging from the proto-slasher ‘Halloween’ to the pre-CGI horror-fest remake ‘The Thing’ and the unique and prescient political commentary ‘They Live’.

sees Carpenter re-recording his most well-known film themes with the help of his son Cody and his godson Daniel Davies, both of whom collaborated on his 2015 ‘Lost Themes’

Rather than running chronologically, ‘Anthology: Movie Themes 1974-1998’ chooses to open with the theme to the Lovecraftian psychological horror film ‘In The Mouth of Madness’; unashamedly owing a huge debt to METALLICA’s ‘Enter Sandman’, the track is not typical of Carpenter’s most well-known soundtrack material, but still showcases a huge musical diversity at work.

‘Assault on Precinct 13’ features one of THE great synth basslines, latterly re-worked by BOMB THE BASS on their 1998 hit ‘Megablast’ and also re-interpreted by UK synthesist Mark Shreeve, it still sounds an utterly brilliant and minimalist electro track. Lesser known themes such as the ones to ‘The Fog’ and ‘Prince of Darkness’ are both paired-down atmospheric pieces which evoke a sense of menace and whilst the films they accompanied were not Carpenter’s strongest works, they still hold up as standalone pieces of music.

It could be argued that the theme to ‘Escape From New York’ almost single-handedly invented the Synthwave genre; with its TANGERINE DREAM influenced synth brass motif and unique chord progression, Carpenter and collaborator Alan Howarth were some of the first musicians to use a Linn Drum Computer on the original soundtrack and it’s hard to imagine films like ‘Drive’ sounding the same without their influence.

There is very little left to say about the iconic ‘Halloween’ theme, except that the version here remains relatively faithful to the original with the exception of an added prominent 4/4 kick drum and a more Moog-like bass sound. Equipment and budgetary limitations had a huge influence on the Carpenter sound, often resulting in a paired down minimalist feel with sometimes only a skittering hi-hat providing the only percussion; ‘Halloween’ remains a classic example of this. 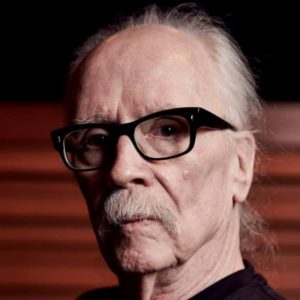 The theme to Carpenter’s version of ‘The Thing’ was intriguing because composer ENNIO MORRICONE was drafted in to provide the score and the music he came up with sounded exactly the kind of motif that one would imagine the director conceiving.

Unrelentingly dark, the music fitted the gloomy all hope is lost theme to the film, one of which took several years to gain appreciation.

At the time ‘The Thing’ was a box office flop and resulted in Carpenter being dropped from directorial duties on ‘Firestarter’ film adaptation.

Although ‘They Live’ remains one of Carpenter’s most original movies, its blues-inflected soundtrack is not one of his strongest and this re-recorded version still sounds at odds with the illuminati-themed film. The closing track to the album sees a re-work of the theme to the Stephen King-penned ‘Christine’ with Carpenter returning to the director’s chair for a promo video which has nods to both ‘Drive’ and ‘The Thing’.

For a director that had admittedly lost his film-making mojo a long time ago, it was a logical, yet genius move to for him to revisit his musical back catalogue both here and with his live shows over the last few years.

When the orchestral score was the norm, both JOHN CARPENTER and TANGERINE DREAM showed that electronic music could work in a film soundtrack context and ‘Anthology: Movie Themes 1974-1998’ reinforces how influential the man is and helps to cement his place in electronic music history.

Purists would argue that it would have been essential to have copies of the original versions here as well, but this is a minor quibble when the interpretations here remain faithful and act as a wonderful reminder of what a superb back catalogue of music JOHN CARPENTER has produced.

is released by Sacred Bones Records and available in vinyl, CD and download formats from https://johncarpentermusic.bandcamp.com/album/anthology-movie-themes-1974-1998