October 20, 2011 / electricityclub / Comments Off on QUEEN OF HEARTS The Arrival 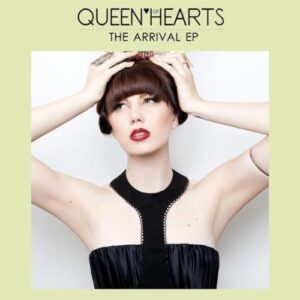 Following her bouncy recorded debut with the JOHAN AGEBJÖRN collaboration ‘The Last Day Of Summer’, the lovely QUEEN OF HEARTS releases some catchy electropop of her own, courtesy of ‘The Arrival’ EP.

On it are her majesty’s two viral hits from earlier this year, ‘Freestyle’ and ‘Where Are You Now?’ The Guardian were one of the first of the mainstream inkies to champion her. Amongst all the journalistic excitement, The Times described ‘Where Are You Now?’ as “a luscious escapist electropop floorfiller of the future from the mysterious London based newcomer”. Meanwhile the hardly electro or pop friendly rag Q said “The upper reaches of the pop stratosphere beckon”.

‘Freestyle’ mesmerises with a hypnotic chill and attaches it to some propulsive backing in the manner of GIORGIO MORODER. Thrusting itself to a galaxy far, far away, the young royal is steadily gravitating towards being pop’s answer to Queen Amidala in the ultimate revenge of the synth! The Force is strong on this one!

‘Where Are You Now?’ contains some great production in the vein of XENOMANIA, its lustre reminiscent of the hit machine’s work on the underrated RACHEL STEVENS album ‘Come & Get It’ and the more electronic antics of GIRLS ALOUD. The chimes here are a lovely touch alongside the pulsing synths and QUEEN OF HEARTS’ seductive cooing; this if nothing else will have every red blooded male shouting “I’m here!”

Starting ‘The Arrival’ however is a sizzling new collaboration with THE SOUND OF ARROWS called ‘Shoot the Bullet’. For those who are not aware, THE SOUND OF ARROWS are Stefan Storm and Oskar Gullstrand, a hot new pop duo from Sweden said by Popjustice to be “the HURTS you can dance to”. Their CGI assisted visual presentation has been described by one blog as resembling “Disney meets Brokeback Mountain”!

‘Shoot the Bullet’ is a wonderfully buzzy pop cocktail, laden with crystalline melodies in the most wonderful of civil partnerships… think GOLDFRAPP’s lovely ‘Dreaming’ from ‘Head First’. Another a crown jewel is QUEEN OF HEARTS’ cover of THE FOALS’ ‘Spanish Sahara’; the gently throbbing sub-ERASURE bassline and sedate arpeggios melt marvellously into the consciousness, thanks to some subtle studio work by DREAMTRAK. Queenie’s voice is a spoonful of gorgeous, honey coated splendour.

And as a final treat for all of her loyal subjects, there’s the previously unheard ‘Black Star’ which is a co-write with Beatrice Hatherley who has worked with KYLIE MINOGUE and ZOOT WOMAN. It’s quite experimentally grimy although blog Like 1999 amusingly says: “she sounds like Russian faux-lesbian duo TATU raving inside a dubstep warehouse!” 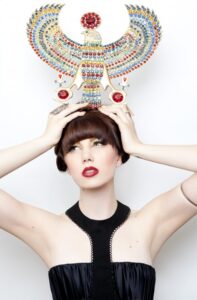 Not featuring on this EP but a surefire glam stomper for the future is the lovely ‘Neon’ which magnificently manages to out Goldfrapp GOLDFRAPP. Then there’s also her MONARCHY collaboration ‘Perfect Mistake’ which has pots of dynamic glitterball sparkle.

With this pair and the excellent Stuart Price produced ‘Feel’ also in the can, ‘The Arrival’ should only be seen as the beginning. There is still MUCH more to come from QUEEN OF HEARTS.

She writes songs about the important things in life – love, loss, heartbreak, betrayal – and thinks that the best pop songs should make you dance and shed a tear or two. All you ever wanted, all you ever needed is here…

takes place at a digital outlet near you now.