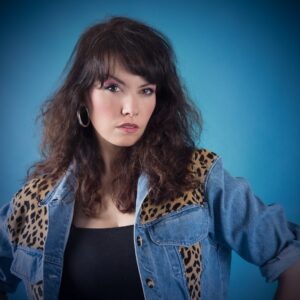 The advent of synthwave as a genre has led to a number of interesting variants with the pop-oriented version of the form being led by international starlets such as DANA JEAN PHOENIX, NINA, and PARALLELS.

Looking to join their ranks with her recently released second album ‘Electric Heart’ is Britain’s very own ROXI DRIVE.

With her own take on the classic MTV friendly sound of Pat Benatar and Laura Brannigan, ‘Electric Heart’ sees Roxi rock out more openly compared with her debut long player ‘Strangers Of The Night’.

Add Brat Pack movies, paranormal comedies and horror films from the era into the mix and ROXI DRIVE evokes colourful images from the past with big hair, leather jackets, sexy jump suits and silk blouses to accompany her synth assisted rock-flavoured sound.

The first thing that has to be said is the cover art for ‘Electric Heart’ is very retro-authentic, had it been inspired by any particular images from back in the day and how did you get the look?

Thank you. Yes I went through 80s single and album covers to find inspiration. I love the whole 80s aesthetic so it was fun putting together the look. I’m very inspired by Pat Benatar and Laura Brannigan so I wanted something reminiscent of their vibe. My friend and band member Glen Jevon came over to mine with all his kit and we had a fun afternoon shooting lots of 80s poses and looks. 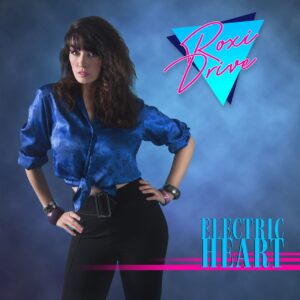 What inspired you to enter this world of synths and popwave as your background is in acting?

Well I’ve always loved music and singing. I sung on stage in various roles when I did musical theatre. I then joined a 40s style harmony girl band called THE MORELLAS which was good fun and we gigged up and down the country together.

I much prefer writing and recording than being in the acting game. I remember feeling a distinct lack of enthusiasm for a lot of the roles I was auditioning for. I have always been an 80s nerd so doing this really fulfils me and I have a lot of fun with it.

Is the rumoured Ryan Gosling obsession just legend or truth?

Haha! I think that rumour may have started with you Chi! I love the movie ‘Drive’ as much as the next synth head but not sure I’m obsessed with the guy as pretty as he is.

Who are your musical influences as far as you own music is concerned?

Ohhh too many to mention! I like to skip between slightly more rocky pop and the more funky pop. I love the pop rock chicks of the 80s, Pat Benatar, Laura Brannigan, Kim Wilde, Tuesday Knight and then the more funky pop artists like Nu Shooz, Cyndi Lauper, Meri D Marshal, Stacey Q and Aleshia. Favourite bands would be DEPECHE MODE, SIMPLE MINDS, TEARS FOR FEARS, BANANARAMA.

‘Run All Night’ started it all, how did the track come together and when did you become aware it was getting a positive response?

Yes ‘Run all Night’ basically began with a friend of mine James Secker sending my demo tape to SELLOREKT/LA DREAMS, who’s a producer in LA and he wanted to work with me which I was very excited about. He had already released it previously but felt it would work really well with vocals, so we got to work. It began with a full verse / chorus pattern and lots more lyrics but it wasn’t working, so we cut it down and created a chorus from one of the lines from the verse “Waiting in the dark” which worked well in the end. We were really pleased with the positive response and I knew then this was what I wanted to do. 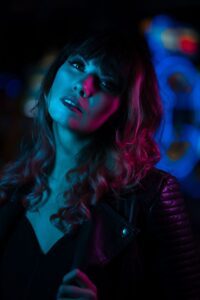 Your first album ‘Strangers Of The Night’ was promising but it would be far to say it lacked aural cohesion due to the number of producers who worked on it; did you set out to do anything on ‘Electric Heart’ to get more of a sonic continuity?

You would think so, but actually I still worked with a number of producers on this album, although maybe the overall sound is more in sync than the previous album.

I particularly wanted more of an authentic vibe with the tracks and was keen to explore the rockier pop stuff with the electric guitars as I’ve always loved that sound. So a lot of the producers I worked with already had that sound or were more than capable of producing it.

So with a song like ‘Dangerous’, what would be the creative dynamic on that?

‘Dangerous’ was a track JUNO DREAMS produced and it was already pretty much in the bag, production wise. He needed a singer to write and record a melody for it and I got to work. I was very excited to work with him. That track came out better than I think either of us expected. I’ve had a lot of great response on that one, it’s quite an empowering track and I like to think makes you feel like you’re in the 80s soundtrack to your life when listening to it. The lyrics were actually based on one of my favourite 80s horror movies ‘Fright Night’. You’ll see in there the reference to mirrors knowing all the secrets and lies.

‘Breathe You’ has some great synth passages while vocally it’s quite wispily emotive, what is it about?

Yes another one I based on a favourite 80s movie, this time ‘Starman’ by John Carpenter. I always loved this film and the lyrics were about this extra-terrestrial ‘man’ having to go back home but also having to leave this woman that he’s fallen in love with. He can’t stay on Earth because he literally can’t breathe and won’t survive. Every time I see that film I cry so it was nice to write about it in the lyrics.

You’re getting to play out a lot more of your Pat Benatar fantasies on tracks like ‘Breakdown’, ‘Lost In the Game’ and ‘Video Fantasy’?

Yes absolutely! She’s such an inspiration of mine and her performances are so powerful. Her music really lifts the mood. I really wanted tracks like this on the album.

Were you ever a hairbrush in the mirror kind of girl when you were a teenager?

I’m sure I did stand in front of my mirror with a hairbrush. I was always performing in some way, if it was in the school choir, or school plays, or local theatre group. I remember begging my teacher when I was about 10 if I could stand in front of the class and sing ‘Eternal Flame’ by THE BANGLES. I guess the 80s influence was written in the stars even then. 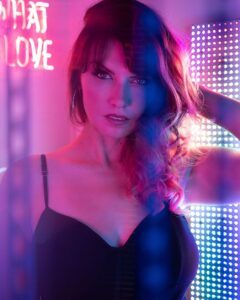 How do you prefer to record your voice? Are you a one take type of girl or is comping better with regards the end product?

Mostly comping. I rarely get a whole song in one take and I would never be happy with that. I’ll do several takes and decide on the right ones.

‘Hot Night’ is a real fist in the air moment like it could have come off a Don Simpson and Jerry Bruckenheimer film, was Bonnie Tyler in the house?

Haha she may have been when Diane Warren wrote it. It was originally sung by Laura Brannigan for the ‘Ghostbusters’ soundtrack and I’ve always loved it.

Why did you opt to include two versions of ‘Electricity’?

I wanted a different spin on it and I really love DIAMOND FIELD’s style of taking a song and reworking it as opposed to remixing it and creating almost an acoustic version which stands well alone as a different song entirely. I didn’t want a typical remix, I wanted it to sound very different.

Which are you own favourite songs on ‘Electric Heart’ and why?

‘All My Dreams’ is a beautiful song written by a wonderful musician called KIDBURN. We both loved working together and it turned out our voices had a really nice synergy. ‘Breakdown’ and ‘Video Fantasy’ are real foot stomping feel good tunes. ‘Electricity’ is really good fun to sing on stage.

Do you feel an affinity with the other synthwave girls like NINA, PARALLELS and DANA JEAN PHOENIX like sisters in arms?

Yes, I love those artists and lots of other female artists doing the retro thing. I’ve always been drawn to female vocalists. I love listening to them sing and it’s so wonderful that we all support each other. Everyone has their own style and vibe which I love.

How are you finding handling social media and marketing your music to an audience? What have been the pros and cons?

I was used to it to a certain extent when I was an actress. It can be tough to have to constantly find content to put out. We don’t get paid for social media posts, we just have to hope that we sell more music or reach out to a wider audience. The pros are most defiantly being able to interact with so many people all over the world. I’ve had the nicest support from people and the kindest of messages about how my music has made people feel or helped them in some way and that means everything to me. Makes it all worthwhile.

How have you been finding performing live? What’s it like compared with acting in a play?

I was bricking it when I first started. Simply because although I’ve been in a band or in plays, I’ve not stood up alone with no one by my side sharing the load. I have found the more shows I’ve performed, the more confident I’m getting and like anything else, it’s a learning experience and my show is building all the time. I now have an awesome drummer called Matt and a keytar player in Glen, so we now have a really nice dynamic on stage as a band. I feel like I can relax and let loose a bit more. 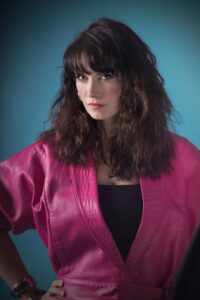 What’s next for you, lockdown depending of course? Are there any hopes and fears with regards doing music?

Yeah it’s a shame as I had some nice shows booked this year. I’ll continue more writing and recording. I’ll soon be releasing a horror track to promote an 80s horror novel David Irons has written called ‘Polybius’. Based on an urban myth about a killer arcade game in the 80s, so that will be released shortly.

I’m working with a couple of other producers on possible side projects. I’ll probably continue to keep varying my style. I don’t like to get stuck in a box. I’ll do what feels right and what I enjoy. I’m filming some live performances at home, so me and the guys can pretend we are on stage from our homes.

ELECTRICITYCLUB.CO.UK gives is warmest thanks to ROXI DRIVE

‘Electric Heart’ is available as a download album direct from: https://roxidrive.bandcamp.com/album/electric-heart

Text and Interview by Chi Ming Lai
Photos by Glen Jevon except where credited
29th April 2020, updated 19th May 2020