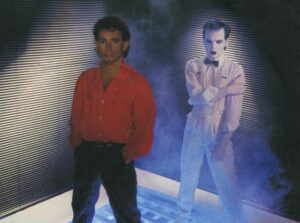 The years from 1983 to 1992 are not a highly regarded period in the career of synthesizer godfather Gary Numan.

But there was a short time in between when he opened himself to collaboration and pure pop. When the excellent ‘Change Your Mind’ was released as a single in 1985, SHARPE & NUMAN were seen very much as the odd couple. Their promotional photos captured the ultimate clash of images; the curly haired jazz funk aficionado with The Iceman!

Bill Sharpe was the pianist with jazz fusion group SHAKATAK. Together with their drummer Roger Odell, they had written a piece of computerised electrofunk that needed a vocal. The recording session at Rock City Studios was engineered by Nick Smith who had been working with Numan since 1980. He made the suggestion that the former Mr Webb would be ideally suited to the futuristic backing.

Numan heard the track and agreed to sing on it. Having shown jazzier leanings and employed musicians who had performed with SHAKATAK previously like Dick Morrissey and Tracey Ackerman on his 1983 album ‘Warriors’, the union wasn’t perhaps as surprising as it seemed.

‘Change Your Mind’ gained extensive radio play and reached No17 in UK. It gave Numan a brief commercial renaissance while plans were made for a SHARPE & NUMAN album. Although interim singles ‘New Thing From London Town’ and the brilliantly club friendly ‘No More Lies’ were issued in 1986 and 1988 respectively, it would be mid-1989 before the album ‘Automatic’ was finally unleashed by Polydor Records with little fanfare. To the few that bought it, it was worth the wait.

The lead single ‘I’m On Automatic’ saw Gary Numan at his most commercial since ‘We Take Mystery (To Bed)’ but wasn’t a hit while ‘Voices’, which had originally been the B-side to ‘No More Lies’, was one of the best tracks Numan had ever been involved with, standing up well next to anything from his classic machine music era.

Indeed, Polydor in Germany had considered it so good, they released it as a single in its own right complete with a 12 inch extended mix! One of the keys to the artistic success of ‘Automatic’ has to be the distinct roles in the genesis of the album.

The music had already been written by Bill Sharpe and recorded. While Numan may have written his own lyrics later on all the tracks except ‘Change Your Mind’, most of the songs’ structures would have already been shaped. This gave them a lighter spacious pop feel that would have been totally alien to Numan.

With Bill Sharpe’s counter melodies and jazzy synth solos accompanied by vocal counterpoints and big choruses from renowned backing singer Tessa Niles, everything came together for ‘Automatic’ to possess a unique warmth that was unusual for a record featuring Numan. Adding his lyrical and vocal input, the final recordings have a wonderfully authentic dystopian chill that Sharpe could never have achieved alone. The contrast is the key but most importantly, the essential ingredient that makes this album something quite distinct is the voice of Gary Numan. 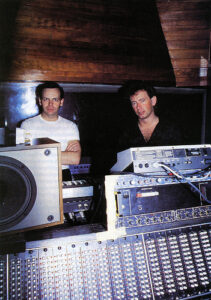 Of the other tracks, there’s the uptempo anthemic FM synth rock of ‘Turn Off the World’, ‘Some New Game’ and ‘Rip it Up’, mid-paced electropop with ‘Breathe in Emotion’ and even a pleasant ballad of almost Phil Collins proportions in ‘Welcome To Love’!

Earlier single ‘No More Lies’ is present in a toughened up ’89 mix although ‘New Thing From London Town’ is missing, having been included on Gary Numan’s 1986 long player ‘Strange Charm’. Closing track ‘Night Life’, an attempt at techno house is perhaps the weak point of the album… but at least it’s at the end!

‘Automatic’ is perhaps the nearest thing Gary Numan has ever come to doing actual pop music. His classic albums may be highly regarded in the realms of pioneering electronics post-punk but in retrospect, they are  far too leftfield to actually be pop.

Ironically, with his later forays into more commercially oriented R’n’B and funk on albums such as ‘Outland’ and ‘Machine and Soul’, they were often confused as they lacked the creative tension of musicians who actually understood the forms he was trying to emulate, as they were employed as session players rather than co-writers.

But by actually partnering a virtuoso such as Bill Sharpe, he produced one of his best, if rarely heard, collections of work during his acknowledged leaner years. For an interesting and enjoyable diversion in the career of Gary Numan, one could do a lot worse than ‘Automatic’.