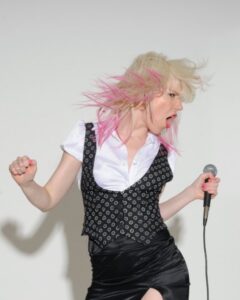 Electropop is spreading its analogue wings across the globe and the next region to be falling under its spell is South America.

So it is therefore appropriate that the country with the most European influence, Argentina should become the leading exponent.

There’s already been the Anglo-Argentine duo HEARTBREAK with their 21st Century take on Italo-Disco but now we have a full-blooded beat combo in the wonderful SHH with theirElectronic Pop Buenos Aires Style.

SHH hail from Buenos Aires and have had domestic success with their own brand of sun-kissed electronic power pop.

Although the two albums ‘SHH’ and ‘Gaucho Boy’ released by Argentine indie label Oui Oui were sung mostly in Spanish, they’ve now adapted their sound with newly translated English lyrics for the prestigious Northern European electro market. Fronted by the alluring peroxide blonde Diana Huarte on vocals with Daniel Gorgostegui on synths and programming to complete the line-up, they recently played an energetic set at London’s Water Rats as part of their campaign for future international stardom.

Schooled in opera and brimming with charm, Diana’s vocals display a magnificent range which suits both uptempo opener ‘Tiger’ (‘Donde’ on ‘Gaucho Boy’) and ERASURE-esque ballads such as ‘Sleepless’ (‘Sin Dormir’ on ‘SHH’). The accented touch provides a sexy warmth to proceedings while the strong production values drive the tunes along with strong melodies and danceable techno rhythms.

They give us one of their earlier songs in Spanish called ‘Ausencias’ which features traditional accordion sounds and influences amongst all the electronica – you know when you’ve been tango-ed! Maybe TV dance show ‘Strictly Come Dancing’ (or ‘Dancing With The Stars’ for those of you reading from abroad) will feature a SHH song next time the gorgeous Ola Jordan tries to tackle the Argentine Tango with a hapless celebrity!! Meanwhile ‘Elena Hernandez’ is another ballad but possesses some of the percussive snap of BLANCMANGE plus a smattering of Tijuana brass!!

One of the highlights is ‘Hunt’ (‘Carceria’ from ‘Gaucho Boy’) which, as the title suggests, is a ferocious attack with a rockier edge to boot! It’s on songs like this where Diana’s spirited stage persona comes to the fore. They say Latinas are fiery and there certainly is a provocative passion in her live performance.

But the stand-out track from the set and the ‘Gaucho Boy’ album is ‘Wonderful Night’. Reminiscent of Greek power popsters MIKRO, it turns out the UK-domiciled Diana is a big fan and saw their debut London performance at The ICA in 2007. The chunky pulsing sequences to a solid beat and a rousing chorus are in the similar vein to MIKRO’s brilliant ‘Robonation’ or ‘Kalinihta’ so fans should certainly find the blissful optimism of SHH to their taste. After several well received appearances in England and Spain, further live dates are planned.

SHH’s music is available via iTunes and their MySpace.

Posted in Introducing Tagged with SHH