February 21, 2014 / electricityclub / Comments Off on WRANGLER Live at Proof Positive 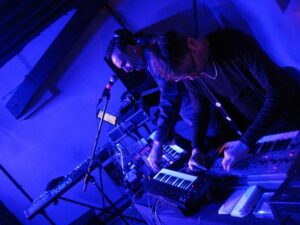 With their debut mini-album ‘LA Spark’ now set for release in May, WRANGLER previewed material at a special live showcase for Proof Positive, an experimental improvisation evening curated by musician Tom Rogerson of THREE TRAPPED TIGERS who has also collaborated with the trio.

The trio themselves are Stephen Mallinder ex-CABARET VOLTAIRE, TUNNG’s Phil Winter and synth collector extraordinaire Benge, best known for his work in JOHN FOXX & THE MATHS whose aims for the project are to harness “lost technology to make new themes for the modern world”.

The intimate location was the ultra-hip Servants Jazz Quarters in Dalston, a bar with an open basement for live acts to play in.

Eschewing the vast arrays of analogue kit for which is particularly Benge is known for, WRANGLER use a more practically workable softsynth arrangement augmented by live electronic drums, a variety of touch pad controllers’ and in the latter half of the set, Tom Rogerson on his trusty Juno 60.

The key WRANGLER track has to be ‘Lava Land’, a superb cross between CABARET VOLTAIRE and prime ‘Metamatic’ era JOHN FOXX but with a modern twist. Mallinder’s voice manipulations up and down the scale are a particularly now statement, ranging from demonic gargoyle to stern drowning robot. The frantic pace is strangely danceable but the mood is distinctly unsettling, especially when the screeching string machine kicks in. Another highlight is the dystopian electro funk of ‘Harder’ with its cacophony of phased percussive effects. Meanwhile the leftfield but club friendly ‘LA Spark’ title track will meet the approval of Cabs fans circa 1983-85. 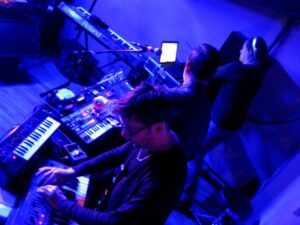 At the close of a short set to which Mallinder amusingly quipped “what do expect for a fiver?”, there was an unexpected rework of CABARET VOLTAIRE’s ‘Crackdown’. With the audience shouting for more, Mallinder appreciated the response but told everyone that he had to catch the last train back home to Brighton. With vintage synths and drum machines given space to create a soundtrack for a dissident future landscape, WRANGLER’s ‘LA Spark’ promises to be one of most eagerly anticipated electronic releases of 2014.

‘LA Spark’ is released by Memetune on vinyl, CD and digital formats on 5th May 2014