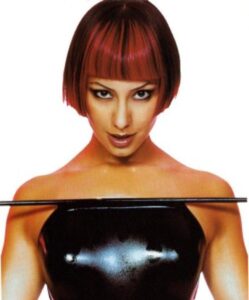 Formed following the phenomenon of Acid House and Rave, REPBULICA were a refreshing slap in face during Britpop.

Their massive 1996 hit ‘Ready To Go’ was adopted as a rallying cry by the sports stadiums of the globe as a result, the parent album ‘Republica’ sold three million worldwide. Follow-up single ‘Drop Dead Gorgeous’ was also a big hit and used in the Wes Craven horror flick ‘Scream’.

Fronted by the vivacious Saffron, their rousing Techno punk rock were like TOYAH fronting NEW ORDER and sat well with the rise of female fronted indie bands like SLEEPER and ELASTICA alongside edgier dance acts such as UNDERWORLD and THE PRODIGY. Indeed, Saffron sang on the latter’s cover of L7’s ‘Fuel My Fire’ from the album ‘The Fat Of The Land’.

The second album, ‘Speed Ballads’ was released in 1998 but its promotion suffered when their label, Deconstruction Records folded shortly after its release. The band went on hiatus in 2001. In between, Saffron guested on JUNKIE XL’s 2003 album ‘Radio JXL – A Broadcast From The Computerhell Cabin’ which also featured DEPECHE MODE’s Dave Gahan and GARY NUMAN, while she also sang backing vocals on THE CURE’s ‘Just Say Yes’.

The original nucleus of Saffron, former FLOWERED UP keyboard player Tim Dorney and guitarist Jonny Glue reunited and in early 2010, REPUBLICA performed a string of European dates including a comeback gig at London’s Islington Academy. They also issued ‘Ready To Go 2010’, a new version of their best known song produced by Andy Gray and Alan Moulder.

Following a well-received set at GuilFest in July 2012, REPUBLICA will be airing brand new material such as the brilliant ‘Christiana Obey’ on an extensive nationwide tour in March with TEC favourites TENEK as support.

ELECTRICITYCLUB.CO.UK caught up with Saffron for a natter out of the darkness… 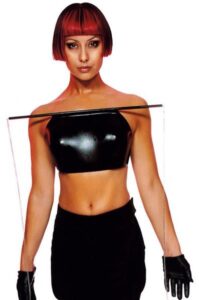 REPUBLICA first became widely known with ‘Ready to Go’ in 1996. It was a big hit and being played in the sports stadiums of the world. It was quite a whirlwind, how was it for you looking back?

We embarked on a 65 date tour of America after touring UK for few years and ‘Ready To Go’ became a huge hit on radio and MTV. On one week, we received 29,000 plays and was the most played song that week across America. The NFL picked up on it and it became the New York Rangers ice hockey team’s anthem. It went No1 in quite a few countries and also became big football song in England. Sunderland played it before a game and we did a gig at the Stadium of Light in middle of the pitch! It was great feeling for us as a band. We continue to be amazed at its popularity. It has been used in over 300 films and adverts.

We originally started as a purely electronic band. We were heavily into acid house dance music from 1988 onwards as well as having early 80s electronic influences; Simple Minds, Japan, Human League, Numan, OMD, Depeche Mode. We were all into bands like The Cure, The Clash, The Jam, Gang Of Four and The Banshees. With my voice and mine and Jonny’s lyrics, we added guitars and strove to find a sound that married rock and electro. We arrived back from America and the whole Britpop thing was happening. They were great times to be in music in the UK! 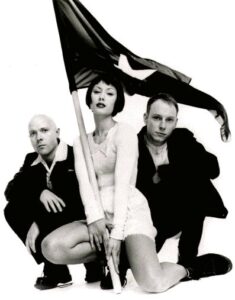 It was also the time of Girl Power and you seemed to slot into that quite nicely. It turns out you were a bit of a role model for girls who had aspired to perhaps be more rock’n’roll?

It was especially great time for female fronted rock/indie bands around the time of Girl Power, empowering for young women definitely.

There were some great bands and artists like Garbage, No Doubt, Elastica, The Cardigans, Sleeper, Echobelly, Texas, Saint Etienne, Curve and PJ Harvey plus there was Hole, Veruca Salt and Luscious Jackson in the US.

Who were your own influences as a singer/performer?

‘Drop Dead Gorgeous’ was another hit while songs like Bloke’ and ‘Bitch’ were also fan favourites. The latter pair compliment each other well, what inspired the lyrics to those.

‘Drop Dead Gorgeous’ was used in the original ‘Scream’ film. Wes Craven phoned us in Nashville, Tennessee to say the lyrics went exactly with the storyline to his new movie “My ex-boyfriend lies, he does it every time, it’s his permanent disguise…Yeah! Yeah! Drop Dead Gorgeous”! We played at the premiere in LA. I’m proud that it also became a big gay anthem.

‘Bloke’ was actually one first songs and singles we released, it’s about everything we didn’t wanna be. ‘Bitch’ is about youth and being fearless. 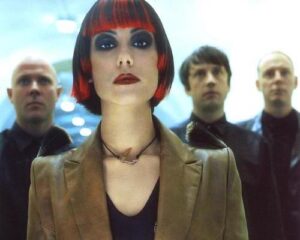 The moment appeared to have waned by the time ‘Speed Ballads’? Why was that do you think in hindsight?

Our label in the UK Deconstruction Records went under the week of release of our second album ‘Speed Ballads’. We had sold couple million albums and just done a sold out UK tour, but fans couldn’t buy our record in shops! We were also told we couldn’t get out of contract. It was f*cked up.

Music kinda goes in 5 year cycles and it was at tail end of the Britpop era anyway. What a bloody great 5 years though!!!

What did you do in the intervening years?

Republica wrote the theme music for the Morwenna Banks TV show on Channel 5 and did a duet with Gary Numan on ‘Are Friends Electric’ for his ‘Random’ album. We sang it together live at Shepherds Bush Empire. We carried on touring other countries and then all decided we wanted to do other projects. I collaborated on a duet with The Cure on ‘Just Say Yes’ from their ‘Greatest Hits’ album. I also did a video, TV and sang live with them in Paris. There was also The Prodigy duet with Keith ‘Fuel My Fire’ on ‘The Fat Of The Land’ album.

There were three songs I wrote for Junkie XL; ‘Crusher’, ‘Spirits’ and ‘Beauty Never Fades’ which became a No1 Dance Single and was used in film ‘The Animatrix’ and ‘A Scanner Darkly’ with Keanu Reeves. I was his special guest when he headlined the Pinkpop Festival Holland. I also collaborated with US band Deepsky, I co-wrote and sang ‘Smile’ on the ‘In Silico’ album, co-wrote and sang ‘There’s No Pleasin Some People’ on Ace from Skunk Anansie’s ‘Still Hungry’ solo album. 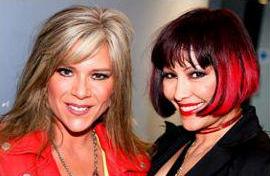 I also worked with Jeff Beck, Tarantella and Redanka, Ed Case, Carl Cox and Maxim Reality from The Prodigy on a duet track called ‘Heart Sing’. I sang with The Blockheads at a Tribute to Ian Dury at Brixton Academy.

I also DJ-ed for Versace, Tommy Hilfiger, Natt Weller and the Sultan of Brunei as well as doing live shows in Greece, Denmark and Poland with my friend Samantha Fox.

Johnny Glue had another band Contra Mundum and a solo album. Tim Dorney DJ-ed and had a project Greedy Soul with ex-members of his band Flowered Up.

How did you decide to reform REPUBLICA and do it all again in 2009?

The boys approached me to do some gigs in 2009 and 2010. We had a great time so it went from there doing shows the UK, Dubai, Bahrain, Bucharest and Transylvania Romania, Silverstone and various festivals. Our label lost the original parts to ‘Ready To Go’ so we re-created/recorded it again with Andy Gray and Alan Moulder mixed it. We put it out with new mixes and it went straight No1 in the Dance charts.

Are there any new songs? What do they sound like?

We are currently working on new songs. I would say even more electronic…

You’re doing this extensive UK tour in March. What could people expect if they come along?

We’re very excited about the March tour and we hope have new EP out by then!

The perception was that REPUBLICA partied quite a bit back in the day. Will there be more of the same or will this forthcoming tour be slightly more sedate?

Republica came out of whole acid house party scene and carried on all round the bloody place. If you don’t have fun being in a band, there’s no point doing it! 🙂 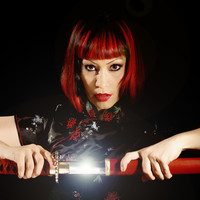 Have you any favourite acts and bands at the moment?

What are your future plans etc with regards REPUBLICA?

ELECTRICITYCLUB.CO.UK gives its warmest thanks to Saffron

Posted in Interviews Tagged with Republica