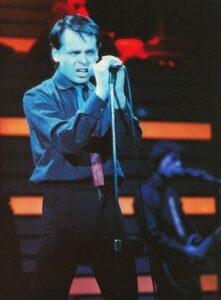 ‘Back Stage – A Book Of Reflections’ is a comprehensive account of GARY NUMAN’s imperial years from 1979 to 1981 compiled by long time Numan enthusiast Stephen Roper.

First released as a hardback book in 2012, it featured contributions from band members (Chris Payne, RRussell Bell + the late Cedric Sharpley) and support acts (OMD, SIMPLE MINDS + NASH THE SLASH) as well as the man himself.

Numan said: “That’s why I enjoyed reading this book so much. It gives a voice to so many people that were vitally important to me, and to what happened to me, in those early days. I was grateful to them then, and I remain grateful to them now”.

Several interviews were conducted with Numan over a period of a few years, although not all of the transcripts were used. Stephen Roper has kindly allowed ELECTRICITYCLUB.CO.UK to publish some of these previously unseen texts.

What was the idea behind the ‘Teletour’ stage set?

It was a continuation of ‘The Pleasure Principle’ set in essence; the idea of a city in the future where the walls themselves would light up as darkness fell.

How different did you find the ‘Teletour’ from ‘The Touring Principle’?

I felt that I was better on stage, although very aware that I still had a lot to learn. I was getting very battered by the press, perhaps more during the ‘Telekon’

period than with ‘Replicas’

and ‘The Pleasure Principle’

, so that was quite difficult to deal with at times. It made me feel a great deal of affection for the fans.

I would read some sh*tty piece in one of the music papers and then walk out on stage and everybody would scream and go mad. It bought a tear to my eye on more than one occasion. Overall though I thought the show itself was better, the music had moved up a gear, I was a little more confident, just that little bit more experienced. Things weren’t quite as shocking as they had been the first time round.

You spent a lot of time with Australian musician James Freud of THE RADIO STARS after the end of ‘The Touring Principle’ and worked on an unreleased album with him and his band, any memories of your time with him and why the album was never released?

I remember we went to Japan for a while as there was a girl there I’d met on tour that I was keen to see again. He was just very easy to be with, good fun. I don’t make friends very easily so it was good to have someone to hang out with who led a similar kind of life that was similar to me in many ways.

The album was recorded in England and my memory of it was that things were a bit fraught at times. I’m not the best person to work alongside. I get too intense and moody. I wouldn’t work with me. I’m not sure why it didn’t come out I’m afraid. It may have been they didn’t like it, management problems perhaps, label problems, maybe the band themselves fell out with each other. I do remember they went through a series of revelations about each other and each other’s desires and habits. It was quite fascinating to watch from the outside. 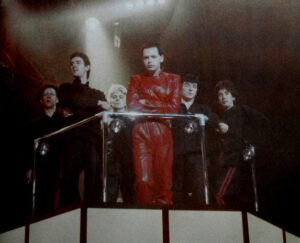 The ‘Teletour’ ended in Canada but should have gone on into Europe, Asia and Australia, what were the reasons why these never happened?

I don’t remember at all I’m afraid. I know I was very keen to stop touring, it’s why I announced the retiring thing and played those last Wembley shows. I also wanted to get back into the studio and get on with the ‘Dance’

album recordings. So, perhaps it was me that just decided to stop.

‘On Broadway’ was the first time you’ve covered anyone else’s track, how did this come about and how did the awesome Billy Currie instrumental come about?

Not strictly true as I did ‘Trois Gymnopedies’ as well around that time I think. I had always loved the ‘On Broadway’ song and finally had a chance to play it live in a setting that was appropriate. Doing a synth version of it was perfect given the success that I’d enjoyed with electronic music. The Billy Currie part of it was simply down to him being in the band at that time and the fact that he’s just a fantastic player. He was a bit of a hero of mine at the time.

Dennis Haines left the band after the recording of ‘Telekon’; you said at the time that he “didn’t quite fit personally in the band”. Do you have any recollections?

The Battle for the River Dee!!! You hired some boats out at Chester during the ’Teletour’ on a day off? What happened with that and the “Sheep” incident with the band and crew at Edinburgh?

I remember it well enough, although everyone that was there seems to remember it a little differently so perhaps none of us remember it correctly. It really wasn’t that big a deal to be honest. We rented some boats, started splashing each other, it got a bit out of hand and I think we got into trouble. Just kids’ stuff!

The sheep happened without me as I was locked into a hotel room with some blonde woman. I think I had the better time. As far as I know, they decided to steal a sheep to put into the tour manager’s hotel room. No idea why. They couldn’t catch a live one so they found a dead one instead and it split as they pulled it onto the tour bus. Yes, I definitely had a better night.

The farewell concerts at Wembley are still one of the most amazing live shows ever seen. How did the planning for these concerts go, the design for the stage, the prep work etc?

The design of it was built around both ‘The Pleasure Principle’ and ‘Telekon’ tours but with a number of huge additions. I spent an absolute fortune on it, to try and make it the biggest thing there had ever been in an indoor venue up to that point. I loved the design process, but it was when we got to stage rehearsals that the sheer scale of the thing really hit home. It was amazing. I was very proud of it. 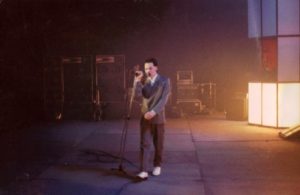 After the shows were over, what went through your mind and was it the end of a chapter for you?

I was very sincere about wanting to get out of touring at that time so it was all quite emotional. I realised even as I was walking off the stage that I might have made a huge mistake. It was certainly the end of a chapter.

How did it feel to work with ROBERT PALMER on his songs ‘Found You Now’ and ‘Style Kills’?

I felt very honoured that he was playing two of my songs in his live set. It was ‘Cars’ and ‘Me! I Disconnect From You. When I met him, he invited me out to his house in the Bahamas I think, and I played him the ‘Telekon’ album. It hadn’t been released at that point. He really liked the ‘I Dream Of Wires’ song and recorded his version of it while I was there. He also had another couple of songs that he said he couldn’t finish, so I worked on those as well while I was there. He was a great man.

You did a promo video for ‘Metal’. How did this come about and did you ever consider releasing it as a single at the time?

It wasn’t a promo as such, it was a TV film, made by Tyne Tees TV I think, for a performance of that song on their show. Rather than just going into their studio and filming a performance of it, along the lines of Top Of The Pops, they took me out and we filmed a clip for it. I can’t remember if I ever considered it as a single but I should have. ‘Metal’ would have made a great single. Not choosing that was one of my many mistakes.

Your uncle Jess Lidyard played drums on your first two albums as TUBEWAY ARMY but left just as you broke into the charts and had huge success, can you remember the reason why he left and how you felt yourself about it?

I asked him if he wanted to join the band full-time but he didn’t want to. He had a really good job at the time and I think he was reluctant to give up the security of that for an uncertain future with me. Plus, he had been in bands before and done a lot of touring all over Europe so I don’t think it was the big exciting thing for him that it was for me. 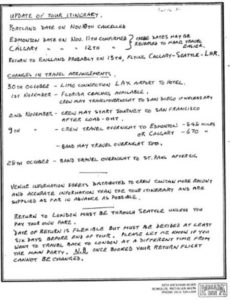 The crew and band members who you spent nearly two years travelling the world felt they were part of a family, was this the same for you?

You do get very close to people when you tour, no doubt about that. You live life to the full and go through many extreme experiences together, most of them good. I think it’s only natural that those bonds feel as strong as they do at the time, and for a while afterwards.

I always wanted to cultivate that closeness as well. I always have on any tour I’ve ever done. It’s important to feel close to the people around you when you’re touring.

For a lot of people the end of tours is a really bad time. I know a lot of people who plunge into depression at the end of a tour, especially a long one. I used to, before the children, but now life returns with a huge bang the day you get home and I just don’t have any time to be wallowing and missing people. But, it’s one of the reasons why I’m always just a few months away from another tour. I love the life, I love the people.

‘Back Stage – A Book Of Reflections’ is available as a download PDF compatible e-Book for Android, Windows, iPhone, iPod and desktop at £4.99 from http://www.thetouringprinciple.co.uk/