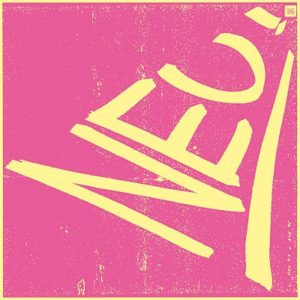 ‘Neu! 86’ (formally ‘Neu! 4’), an aborted reunion of founder members Michael Rother and the late Klaus Dinger has now finally been issued officially as a separate entity on CD and LP via Grönland Records. It was originally released on the Japanese Captain Trip label in 1995 without Rother’s consent.

Following Dinger’s death in 2008, the album has been reworked from original multitrack tapes by Rother with the blessing of Dinger’s widow Miki Yui. With the end result, Rother has now referred to this collection as “our fourth studio album”.

Dinger and Rother were never easy bedfellows even at the height of their acclaim in the early 70s. Dinger, who pioneered the motorik beat, was manic and confrontational while Rother was more laid back, texturing his guitars and later electronics to produce mini-cacophonies of sound. The 1972 eponymous debut albump roduced by the legendary Conny Plank was a fine example of what was unfortunately termed by the UK music press as krautrock.

However, problems surfaced during the making of ‘Neu! 2’ when they ran out of budget. In a fit of madness or genius, depending on one’s opinion, they filled the second half of the album with speeded up and slowed down versions of both sides of their single ‘Neuschnee’ and ‘Super’, complete with needle drops! Other experiments included drilling an off-centre hole into the vinyl and using a faulty cassette player! 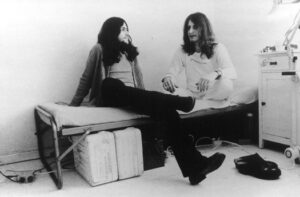 Unable to recreate their sound live as a duo and unwilling to face the wrath of rock purists by using tapes, there was a break of two years during which Rother undertook a well received side-project named HARMONIA with Dieter Moebius and Achim Roedelius of CLUSTER. They recorded two albums, ‘Musik Von Harmonia’ and ‘Deluxe’, and played several gigs including one in the presence of BRIAN ENO who later collaborated with them what eventually became the HARMONIA & ENO ’76 ‘Tracks and Traces’ collection.

However, relations between Rother and Dinger had got so bad that by the time of third album ‘Neu! 75’, the duo recorded a side each individually with minimal input from the other! But the end result was outstanding, showcasing Rother’s distinct melodic ambience alongside Dinger’s aggressive proto-punk. Rother went solo and released a series of beautiful instrumental albums such as ‘Flammende Herzen’, ‘Sterntaler’ and ‘Katzenmusik’ which made him Germany’s answer to MIKE OLDFIELD.

Meanwhile, Dinger teamed up with his brother Thomas and keyboard player Hans Lampe to form the brilliant LA DÜSSELDORF whose trio of long players ‘La Düsseldorf’, Viva’ and ‘Individuellos’ succeeded in combining quirky ideas with some triumphant tunes. But whatever their musical guises, Rother and Dinger successfully influenced everyone from DAVID BOWIE and BRIAN ENO to ULTRAVOX and OMD. Even a young punk named Johnny Rotten was listening!

The original ‘Neu! 4’ sessions were the first time Rother and Dinger had entered a studio together since 1975. Digital drum computers and more synthesizers were brought into the mix, along with Rother’s Fairlight CMI and Dinger contributing guitar and keyboards on equal terms with his more virtuoso colleague. However the ongoing tensions meant that sessions were never completed and the album was abandoned.

In 1995, ‘Neu! 4’ was issued by Dinger without Rother’s input or knowledge. Rother described this experience as “a rather painful disaster between Klaus Dinger and myself”. 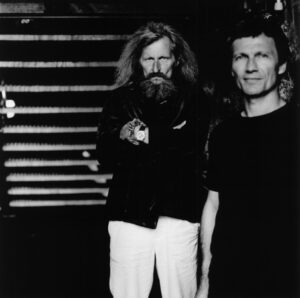 The resulting album may not have scaled the heights of classic NEU! but it was not a total disaster.

The album in some ways had much in common with ‘Neu! 2’ with multiple versions of several key tracks such as ‘Good Life’, ‘Flying Dutch’ and the ‘Wave’ family of variations plus a sound collage of TV adverts called ’86 Commercial Trash’.

So what of Rother’s 21st Century director’s cut? First of all, ’86 Commercial Trash’ and the ambient ‘Bush Drum’ have been dropped while the multiple takes that served originally as irritating fillers have been filtered out by Rother.

The stand-out track and limited edition single ‘Euphoria’ (formally ‘Quick Wave Machinelle’) sounds like a lost OMD demo, the brooding synthetic tones and mechanised version of the motorik beat confirming that McCluskey and Humphreys’ ‘Organisation’ and even ‘Architecture & Morality’ were in many ways, homages to the NEU! and LA DÜSSELDORF sound rather than their neighbours KRAFTWERK.

‘Crazy’ does exactly what it says on the tin with Dinger ranting over Rother’s chugging distorted six-string, it could be considered possibly as a cousin to ‘Hero’ from ‘Neu! 75’. If you listen carefully, it’s also actually a rockier take on ‘Euphoria’! There’s more percussive Dinger-led madness with ‘Good Life’ and also the amusing effects ridden interpolation of ‘La Bamba’ retitled ‘La Bomba (Stop Apartheid World-Wide!)’. 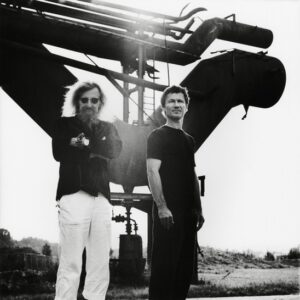 The two earlier versions of ‘Flying Dutch’ have now been abbreviated into a single collage called ‘Vier 1/2’ while a new song ‘Drive (Grundfunken)’ is the closest the album gets to early NEU! tracks like ‘Hallogallo’. Another previously unreleased track ‘Paradise Walk’ is rigidly percussive with minimal synth while ‘Danzig’ is perhaps a little overlong, dominated by Linn Drum toms and claps. It is these programmed digital sounds that mark out this album’s timeline.

But as on ‘Neu! 75’, the ambient influence of Rother acts as an important if creatively tense counterpoint to Dinger who never appeared to mellow with age the way Rother did.

‘Elanoizan’ is actually a slowed down version of the German national anthem ‘Das Deutschlandlied’ and acts an a interlude before the dreamy ‘Wave Mother’ which will be remembered previously as ‘Wave Naturelle’ and is more reminiscent of Rother’s wonderful solo work.

To flesh out the completed article, Rother has added a short reverse tape sound sculpture entitled ‘November’ (OK, it is ‘Euphoria’ again!) and the touching Dinger tribute ‘KD’ which reveals the madness of König Klaus with out takes from ‘La Bomba’ featuring Carmen Miranda impressions and firecrackers thrown in!

‘Neu! 86’ is a fascinating and enjoyable collection of material that captures the spirit of two musicians who still had it in them to produce great music even if they couldn’t abide being in the same room together. As far as comeback albums go, it’s better than most!

is released by Grönland Records