July 24, 2012 / electricityclub / Comments Off on Carry On Synthpop: LUFTHANSA TERMINAL Nice Video, Shame About The Song! 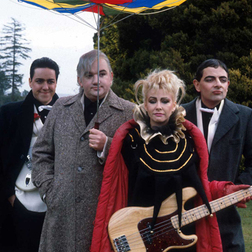 Satirising current affairs and popular culture, the show often courted controversy with its frank and funny take on world events.

The New Romantic movement was always open to ridicule that was nothing to be scared of so in 1982, the ‘Not The Nine O’Clock News’ team happily obliged with relish.

Featuring a spoof Romo band LUFTHANSA TERMINAL, the skit is a rather accurate parody of any number of DAVID BOWIE, VISAGE, ULTRAVOX and CLASSIX NOUVEAUX promo videos with the music replicating the syncopated 16 beat, swimmy synths and octaved bass runs so prevalent on the dancefloors of The Blitz and The Rum Runner.

Lyrically, the verse scarily recreates the dystopia of the period with references to “a honeymoon in East Berlin”, lemmings who “will never swim” and “citizens of sin” while the middle eight talks of a “river of blood where children cry” and being “ruined by an alibi” that “must mean something to me!”

So authentic is the send-up that as in order to confirm it actually is a spoof, the chorus goes all major key accompanied by a sax run that resembles the theme from cop show ‘Cagey & Lacey’!

The programme had many musical targets in its run including KATE BUSH (‘England My Leotard’), OLIVIA NEWTON-JOHN (‘Bloody Typical’) and ALTERED IMAGES (‘Happy Nappy Cr*ppy Song’). But one of their best musical send-ups was one of ABBA entitled ‘Supa Dupa’ with the unforgettable opening couplet “one of us is ugly, one of us is cute”! 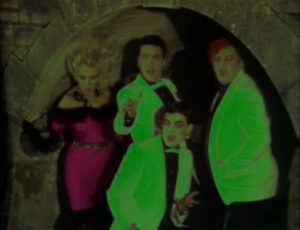 Meanwhile after a stint in the US as part of the ‘Saturday Night Live’ cast, Pamela Stephenson retired from entertainment to become a clinical psychologist. Interestingly, she actually had a real flirtation with the New Romantic movement via an EP entitled ‘Unusual Treatment’ recorded with LANDSCAPE’s Richard James Burgess and John Walters!

However for many men of a certain age, she became their teenage crush after her part in the ‘Not The Nine O’Clock News’ sketch parodying the American Express TV ads… kinda lingers!

.The Best of Not The Nine O’Clock News – Volume 1′

DVDs are released by 2 Entertain