January 20, 2014 / electricityclub / Comments Off on Carry On Synthpop: A Guide To Electronic Gig Audiences 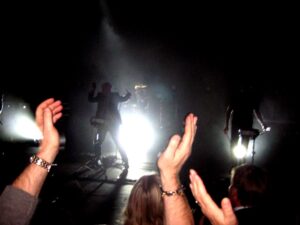 Concert crowds, whatever the genre, can be a funny lot to observe at times.

Yes, there’s Drunk Dancing Girl, The Guy Who Shouts and Finger Whistles So Loud Your Eardrums Throb, The Fan Who Doesn’t Know The Words But Is Singing Along, The Mystery Person Smoking Weed and The Bored / Apathetic / Unimpressed Person With Their Arms Crossed, all as outlined in an amusing article recently by Jezebel. But there are more.

Based on true events experienced by ELECTRICITYCLUB.CO.UK from involvement in websites, events and gigs over the years, here is a light hearted look at electro gig audiences…

The one member of the audience who knew the band before they had even formed! He hopes they will not get too big but will actually announce to anyone else who will listen: “this time next year, they’re going to be really big”. But once the band start playing venues like The Borderline and The Lexington, you can be sure Electro Hipster will be nowhere to be seen… he’ll have now turned his attention to a bunch of noise merchants who have promised never to record a note, because doing singles and albums is far too corporate!

He’s mad and he’s intense: ”Why isn’t this band more popular? Why haven’t they been signed? Why aren’t they played on the radio? IT MAKES ME SO ANGRY!”… calm down dear, it’s only a pop concert!

Not the stalker of the band but your own stalker… he’s come to the gig alone and is desperate for company, yet has nothing interesting to say. He somehow didn’t realise that Mute were not the only label to have released electronic music and is desperate to know your gig itinerary for the next six months… oh well, stalk ya later!

Member Of A Band That No-one Has Actually Heard Of

“Oh, that’s so-and-so from whatsit” cries Electro Hipster… ”WHO?” you go! But of course… he’s dressed like his famous relative! Y’know? The one he doesn’t want you to know about despite the fact that their famous family name has been used in his last three bands’ monikers… oh no, not him again!

There is always one member of the audience who disappears while band are playing their biggest hit only to return and barge his way through with up to four pints of beer unsteadily in his hands… there’s only 15 more minutes of the show left, can’t it bloody wait? And then when he finds his mates, he starts blabbering about football!! There are places where you can drink beer and talk about football, they’re called PUBS! And no, the support band is not an excuse for “more time in the bar…”

He knows about every vintage synth around and will claim it is not real electronic music unless it is exclusively analogue. He will happily listen to KRAFTWERK’s vocoders or GARY NUMAN’s harmonised voice treatments all day but will object to the use of Autotune. He will also tell you how the Dave Smith Prophet 08 is no match for the original Sequential Prophet 5, even though the latter kept breaking down and going out of tune. But then it turns out the only synths he actually owns are a Yamaha DX5 and a Korg Prophecy!!

This solitary being doesn’t actually own a synth but is always at gigs wearing a faded Moog T-shirt. Totally immersed playing the keys of an invisible Sequential Circuits Pro-One, he will even attempt to play the programmed sequencer passages of the songs by hand!

He’s met the band many times before and is now “more of a friend than a fan” but will always shove his way into being first in the queue at the aftershow meet and greet. He’ll speak with the lead singer for hours at a time, presenting him with yet another item from his collection for signing but that’s not enough! There’s the photo, then another and then a guided tour of the photos he’s taken during the gig. And all this while it is painfully obvious that others are in-line patiently waiting!

There is always useless heckling at a gig like shouts of “HUMAN LEAGUE!” during a LITTLE BOOTS concert or “you’re cute” when CHVRCHES are playing… but every now and then, there will be a Smart Alec who actually makes the band laugh with a witty, well timed comment. In 1998 at Manchester NYNEX, Boy George introduced all the other members of CULTURE CLUB. “And this is Roy Hay who lives in LA now for some reason…” said The Boy; “THAT’S COS HE’S GOT YOUR MONEY!” someone shouted back! The former George O’Dowd had to turn his face away as he got stuck into fits of laughter!

The Bloke Who Shouts For The Song The Band Did Earlier

Shouting for songs is part of the fun at gigs but NOT when the song has already been performed… so PAY ATTENTION! And when shouting for a song, at least get the title right! There is no such song by KRAFTWERK or OMD called ‘Radio’!

This character happily tells his accompanying mate about the history of the band they are seeing… unfortunately it’s during the gig itself!

You’re in luck, this sexy continental lady has been flirting with you all night even though her husband has been standing there quietly watching the band. But then she makes an indecent proposal to you: “I want you to come home with me… I want you to f*ck my husband while I watch”!

Shoving their hands in front of people’s faces, this person wants to flash the fact that they have an iPhone rather than enjoy the actual performance… and then that 44 second blurred, distorted clip ends up on YouTube… now, just what is the point???

He’ll have been in the queue since 6pm to get a vantage point for the best shots having checked all the venues on the tour itinerary for suitable photo opportunities. Not as annoying as iPhone Man, because he is at the front and stuck in his position, he will not generally impede sightlines. However, he will be disappointed when he realises he’s in the wrong position, so will have just good photos of the faceless session bassist and blurred ones of the lead singer to show for his trouble.

This person will invite selected punters to the gig to prioritise media and blog coverage but will refuse to speak to them on the night of the gig as the job of getting promo has been done. Then, he’ll start handing out wrist bands for a non-existent aftershow party to make himself seem really important.

The Know-All Who Knows Nothing

There will always be Know-Alls at gigs but this variant will taint their credibility with quips like “I am almost sure Enola Gay was a B-52” and “I bet you’ve not been into CHINA CRISIS since ‘African & Black’ have you?”. Not to be relied on for insider gossip on a band!

Usually accompanied by a better looking, musically savvy but less outgoing wingman, the Womaniser has no interest in the band, just the drunken divorcees and singletons who will be attending the gig. However, he does his research and name drops fan favourite albums such as ‘Dazzle Ships’ and sensitive female friendly ditties like ‘It Doesn’t Matter2’ to aid his seduction. His advice to Hopeless Romeos at gigs though would be that it usually helps to get your musical facts right… so there is no singer named “Gary Newman” and THE LIGHTNING SEEDS song which MARSHEAUX covered is called ‘Pure’, not ‘Pure & Simple’!

More annoying than The Womaniser because at least The Womaniser will have actually left the gig with his conquest before the headline band have finished performing. The Hopeless Romeo meanwhile will haplessly spend half the night telling an Argentinian Devotee that he’s NOT into DEPECHE MODE as his chat-up line!!!

This poor lady missed out on seeing most of the Synth Britannia acts back in the day as she was busy bringing up the kids. But now most of these bands have returned to the live circuit and she’s rid herself of that boring husband, she’s making up for lost time. Usually wearing black because it has a slimming effect, she will have got so excited and alcoholically refreshed at the prospect of her first concert for 27 years that she will be snogging a Member Of A Band That No-one Has Actually Heard Of at the end of the gig because The Womaniser has gone off with her 26 year old daughter!

The Human Trafficker with Accessory Girlfriend

He’s seven foot tall and looks like he’s chewing a wasp while she has a poor sense of rhythm having intoxicated herself at Frankie and Benny’s before the show. He will threaten to break the legs of any male remotely looking at his bird while she will be flirting like mad with them… be careful, he’s probably got a gun! Yes, he’s got political asylum in the UK because he was locked up by the penal system in his own country… there was probably a reason why!!!

He obviously wants to get his own back on Numanoids, so will be waving his badge around and threatening to arrest any passing fan who has their hands in the air for causing an obstruction and enjoying themselves! Quite what he is doing at the gig in the first place is really a police matter…

This is the person who keeps telling you about their band and to look them up on Facebook, yet has no flyers to pass on to you or actual CDs to listen to… or if they do have any CDs on them, they then can’t actually look you in the eye to pass one over to you.