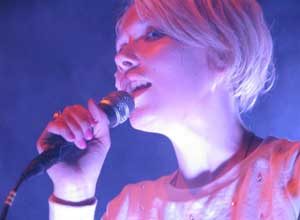 Despite proclamations in 2009 by their singer Karen O that the YEAH YEAH YEAHS had adopted the synth, the resulting ‘It’s Blitz’ album was actually a polished guitar based new wave record with hints of glitterball seasoning.

But with CHEW LIPS, you actually get what YEAH YEAH YEAHS probably would have sounded like if they really had gone electronic.

Describing their own music as “8-bit Casiotone drone-disco” which perfectly sums up ‘Salt Air’, their sound is sparse but there are plenty of pulsing sequencers and drum machines chugging away alongside the occasional spot of bass and guitar. Their songs have a melancholic edge and occasionally like on ‘Solo’, possess a distorted percussive rattle that is not unlike THE TING TINGS accompanied by a Boss Doctor Rhythm!

Probably missing a trick by not including the brilliant Kitsune singles on their debut album ‘Unicorn’, the benefit of CHEW LIPS’ live show therefore is that they can now showcase the highlights of their catalogue in one sitting. And in the superb venue Cargo in London’s trendy Shoreditch on the last day of April, they did just that. 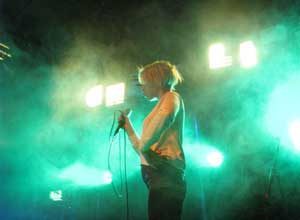 Tigs is a tremendous front woman, wonderfully coquettish and cheekily flirty. Swaying around the stage and occasionally playing a bit of ‘air’ percussion, she was a reminder of the great lineage of post-punk front women like Debbie Harry and Hazel O’Connor.

With James’ bouncy movements on bass not unlike a certain George Andrew McCluskey, at times CHEW LIPS came over like OMD led by BLONDIE!

This was none more so than on their best track ‘Rising Tide’ with its haunting piano, precise drum machine and bass with sparkling synth-harp runs and a spirited vocal.

Meanwhile, Will was playing squelch games with the audience, those bass synth booms were like analogue thrill rides; just enough discomfort for that adrenalin rush but not so long as to make you physically sick. 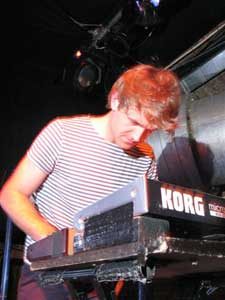 New single ‘Karen’ is brilliant electro indie with hints of guitar-driven NEW ORDER while ‘Slick’ takes a great bleep forward as it builds around the minimal backing. ‘Toro’ (Italian for “bull”) is less aggressive GOSSIP-style new wave funk and ‘Play Together’ is a worthy successor to ‘Salt Air’. Tigs’ favourite CHEW LIPS song ‘Two Years’ is a new addition to the set and comes on like classic DEPECHE MODE while grandeur filled closer ‘Gold Key’ borrows that Mellotron choir from OMD and even features a guitar solo!

To indicate that it may have been an artistic misjudgement not to include ‘Solo’ and ‘Salt Air’ on ‘Unicorn’, they invariably get the crowd dancing and receive biggest receptions of the night. With a tightly focused and well choreographed one hour show, CHEW LIPS rose to the challenge and delivered. Their songs are short and sharp. No progressive doodling or extended versions here, just good tunes. Word will get round!

‘Unicorn’ is released on Family Records