DUBSTAR Live at The Lexington

April 19, 2013 / electricityclub / Comments Off on DUBSTAR Live at The Lexington 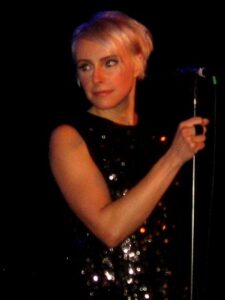 DUBSTAR made their triumphant comeback at The Lexington playing to an eager crowd who had been waiting in anticipation as soon as the doors opened at this quaint but purposeful pub inside the capital.

The trio of Sarah Blackwood, Steve Hillier and Chris Wilkie were making their first public appearance on stage together since reforming.

Although Blackwood and Wilkie have been doing low key acoustic gigs including DUBSTAR songs for a while, this was the first full gig featuring the force of Hillier’s programmed synth backing which was very much a distinctive feature of the DUBSTAR sound, drawing in admirers at the height of the guitar dominated Britpop era.

But appropriately for start the show, they opened with their cover of ‘I’m In Love With A Germen Film Star’ which relaunched this new phase of their career back in 2010. With a combination of tension and power behind her, Blackwood coyly stared out to the crowd, sympathetically interpreting this now iconic song from the post-punk era.

With updated arrangements of hit singles and fan favourites like ‘Not So Manic Now’, ‘Stars’, ‘No More Talk’, ‘St Swithin’s Day’ and ‘Anywhere’, DUBSTAR pleased the crowd no-end and affectionate singalongs from them were signatures of their approval. Some additional fluid bass playing by Hillier on several of the songs also added a further freshness to the variation.

Having departed CLIENT in 2011 to focus on DUBSTAR’s return, what is quite apparent in Blackwood delivery on these types of songs is that it’s more Morrissey than Morrison. Add in Wilkie’s six string interplay and if it wasn’t for Hillier’s electronic gloss, these kitchen sink dramas could almost be like a female fronted version of THE SMITHS. The resigned tone of ‘Just A Girl She Said’ was a perfect example of that with echoes of the Mancunian quartet’s ‘That Joke Isn’t Funny Anymore’. Indeed, Blackwood has performed ‘Stop Me If You Think You’ve Heard This One Before’ at her gigs with Wilkie so the connection is not all that surprising. 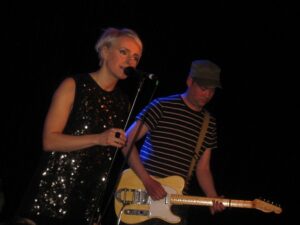 One of Blackwood’s endearing appeals is her Northern lass charm and down-to-earth vulnerability. And this was there for all to witness during ‘I Lost A Friend’.

She simply could not hold the tears back as she recalled her loss but her genuine emotion had all the grown men in the audience feeling for her and cheering her on. Such bearing of the soul was perhaps almost inevitable after all the emotional detachment of CLIENT in the years previously.

But the period with CLIENT has had several other effects on DUBSTAR 2013 too. New number ‘Window Pain’ was driven by a more squelchy electronic edge than what the trio would have got away with back in 1998, while Blackwood was far more relaxed on stage than back in the day when her nervousness made DUBSTAR gigs very fraught occasions for her.

Another new number in the encore, aptly called ‘In The End’, had more organic overtones but still possessed the characteristic blend familiar from the albums ‘Disgraceful’ and ‘Goodbye’. And it was with the former’s title track that the evening’s proceedings were brought to a close. There was even a guitar solo from Wilkie but so restrained it was that it wafted in amongst the aural scenery. But it’s the sum of its parts; synths, guitars, programmed rhythms and Sarah Blackwood’s delectable vocals that make DUBSTAR. And with the comeback album ‘United States Of Being’, there is even the input of ‘Disgraceful’ and ‘Goodbye’ producer Stephen Hague, so there is much to look forward to.

With CLAUDIA BRÜCKEN covering ‘The Day I See You Again’ on her recent album ‘The Lost Are Found’, DUBSTAR’s return is timely and may get them recognition they deserve which they didn’t get when everyone was more focussed on Liam and Damon bickering in the school playground! Actually, it was a shame that ‘The Day I See You Again’ didn’t get an airing tonight because the title summed up the occasion perfectly. Because yes, it really was great to see DUBSTAR again 🙂