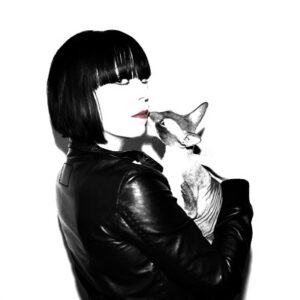 EMMON first came to prominence in 2007 with her excellent debut long player ‘Art & the Evil’ released by the Gothenburg based Wonderland Records.

Her feisty melodic electro as showcased by the singles such as ‘Wake Up Time’ and ‘Rock D’amour’ demonstrated a sophisticated style that successfully merged a dark artful intelligence with the energy of the dancefloor. She is currently working on the follow up to her last album, ‘Closet Wanderings’, which was released in 2009.

There is no sign of Emma Nylen losing any momentum with this new project. On the contrary, EMMON is more vital and full of energy as ever before, thanks to her new collaborator Jimmy Monell. ELECTRICITYCLUB.CO.UK had a nice chat with her about the new album, future plans and horror movies.

You have a new album in the pipeline. When is it expected to be released?
If everything goes as planned, then my third album with EMMON will be released in Sweden during the spring this year. I am now completing the final mixes.

Will there be any singles released before the album?

The first single from the album is called ‘Distance’ and will be released in March. At the same time, I will go to Berlin to shoot a video for single number two, which will be released later this spring.

I guess the new songs you played live lately gives an idea about the sound on the new album, or are there any surprises?

The new album probably sounds still very much EMMON but with some new influences. The feedback I got from people who have heard the new songs tells me that it may sound a little darker and a bit harder in the production compared to previously. I only make music from things within myself, for myself and based on what I think is exciting and inspiring. And since I’m most active in my music-making during the darkest time of year, I think even that will to some extent dye my music.

My vision for the album was to create a kind of epic horror film script of warped and mysterious music arrangements. At the same time, to some extent I wanted to get closer to the kind of music that once made me want to start creating electronic music. 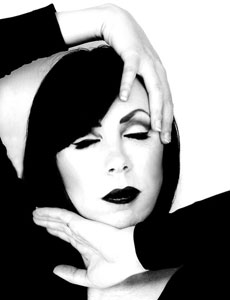 Has the recording of this your third album been different from the past two albums? Did you feel more accustomed to it so to speak? I am also thinking of your new relationship with Jimmy Monell – what was his input meant?

The main difference is that I, for the first time ever, brought in another person Jimmy Monell as co-producer of the record. Previously I have done everything myself during the entire process; from writing songs, recording, producing, mixing and creating album art.

I have been privileged to work with Jimmy when he mixed an album for my other band PARIS a few years ago. He is extremely skilled and an experienced musician and producer. He is also my boyfriend, so it seemed quite natural to start working together. We work very well together and we have the same taste when it comes to music and influences. He compliments me incredibly well in many areas and finds it very easy to interpret what kind of feeling it is that I want to convey with my music to enhance it further.

I still write and arrange all the material myself, but it is quite easy for me to lose patience and get bored with myself when I’m in a very intense creative period. Then it’s incredibly luxurious to have someone else to take over, who can continue build on and renew the things I started to work on.

Are Tony and Niklas in any way involved in your music creation?

Tony and Niklas from my backing band THE JOYBOYS are not involved in the creation of my music at all. It is entirely my own thing. However, the two of them are incredibly wonderful stage personalities that match my concept very nicely both as a talented live musicians and creative people. We have great fun together and also we do lot of music videos and photo projects for EMMON together. 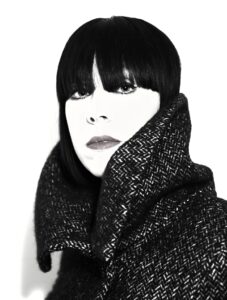 Can you tell us a little about the process when you write a song?

Trying to describe a creative process is extremely difficult. There is no recipe for creating music, it just happens by itself. Sometimes I listen to my songs and think: “where the hell did that come from?” Certainly there is a lot of hard work behind it and I think for myself that it is about finding the focus of a mood or feeling and then try to convey this in a dignified manner.

Will there be any more revamped old songs this time also as with ‘Teenage Kickers’ on the last album? or will it just completely new stuff? Personally I would really like it if there was…

Maybe I will include one or two updated versions of some older EMMON songs that I previously only released as demos. But for people who have never heard them before, they’re entirely new creations.

What inspires me most is actually movies and pictures. As long as I can remember, I have always related my creativity and music to images. A creation of a song probably works in much the same way as when directing the screenplay for an atmospheric film sequence. It’s all about feel and timing. To me, all my songs are like little movies with different themes in my head and an album feels like an entire road movie. Right now, I am also very into horror films which perhaps is reflected some of my new songs. My dream is to get the opportunity to make music for a really good film project.

If I’m not completely wrong, you are now working in art direction – how does it affect your music?

I am currently not working actively as Art Director, but I am a trained artist as well as art director and use a lot of this background in my creative process. 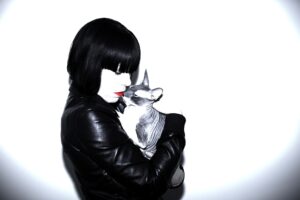 You are always a joy to see live. Tell us about your own experience of your live gigs!

I love to play live and really want that feeling to rub off on the audience. Being on stage is very much a give and take situation. My task as an artist is to create an energy that then grows further in the audience, which in turn gives back its energy to me. My goal is that it always should be a great experience to see an EMMON gig – a memory that the audience will carry with them in the future.

Are you ever nervous before a live gig?

Not as often now as in the past, but of course it happens that I have butterflies in the belly before a gig, but I see it as a good sign. It’s good to be a bit nervous before a gig, it helps to pull yourself together and focus on the task ahead.

I guess the live schedule will be busy again this year?

It would be so incredibly fun to tour around and play a lot this year with my Joyboys. Let’s hope this happens!

If you could have a dream artist to do a song together with, who would it be?

My god, I have no idea, there are so many people that are crazy good. But I would be very proud and happy if, for example, RÖYKSOPP, LOGO, SIMIAN MOBILE DISCO or TRENTEMØLLER would want me to sing on one of their songs.

What other future plans do you have?

The focus is now to release the new EMMON album and do all the work around that and then of course, I want to play as much live gigs as possible. Then there’s always a lot of different creative projects to address. For instance, I’m also about to record an EP with my band PARIS that will be released this year. So I will be quite busy!

ELECTRICITYCLUB.CO.UK sincerely thanks Emma Nylen for her participation in this interview

Posted in Interviews Tagged with Emmon