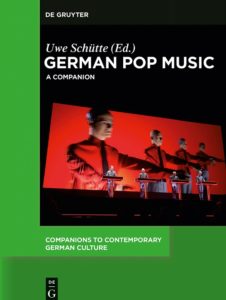 The development of modern German pop music represents a cultural insight to the history of post-war Germany, reflecting its political developments and sociological changes.

It is also emerging as a new field of academic study thanks to the worldwide success of KRAFTWERK who were honoured with a Lifetime Achievement Grammy in 2014.

, a 270 page book discussing the post-war musical landscape of the country and its influence internationally.

A lecturer at Aston University, Schütte curated ‘Industrielle Volksmusik for the Twenty-First Century’, the first academic conference discussing the pioneering legacy of KRAFTWERK in January 2015. Among the speakers were The Blitz Club’s legendary DJ Rusty Egan, Dr Stephen Mallinder of CABARET VOLTAIRE fame and Dr Alexei Monroe who contributes a chapter on the development of German Techno to ‘German Pop Music – A Companion’.

Schütte himself discusses the pioneering retro-futurist legacy of KRAFTWERK. Over 25 pages, he dissects their Industrielle Volksmusik with an academic synopsis of their output from 1974’s ‘Autobahn’, a release he describes as “The most important watershed moment in the history of popular music in post-war Germany” to 2009’s ‘Der Katalog’, a career retrospective which marked a symbolic break with the band’s past as Florian Schneider left the group and Ralf Hütter moved the iconic Kling Klang studio to a business park outside Düsseldorf.

Of course, KRAFTWERK emerged from the horribly named Krautrock movement which is analysed in depth by John Littlejohn, a Professor of German at Randolph-Macon College in Virginia. He highlights that much of this experimental music was instrumental and performed by groups or fluid combinations of musicians rather than solo artists. This reflected the form’s commune origins that came into being under the disillusionment of Germany’s recent past, the divided country’s military occupation and compulsory conscription, something which did not actually end in the reunified Germany until 2011.

Kosmische musik, as the locals preferred to call it, was also an exclusively West German phenomenon as the Communist DDR were more likely to clamp down on bearded, long-haired, drug taking types in its territory. Although a number of these groups like NEU! and HARMONIA did not get recognition until long after they had disbanded, TANGERINE DREAM ended up soundtracking Tom Cruise movies in Hollywood while CAN crossed over to an international audience and even scored a UK hit single with ‘I Want More’ in 1976.

Also discussed in the book to provide appropriate context is the conservative Schlager musical form which many associated with Germany before the influence of KRAFTWERK took a firm hold in dance music. Punk, Neue Deutsche Welle and Rap are also discussed, as well as Germany’s contribution to the Industrial genre through EINSTÜRZENDE NEUBAUTEN and RAMMSTEIN.

Over the University vacation period, Dr Uwe Schütte kindly chatted to ELECTRICITYCLUB.CO.UK about his overview of German pop music…

There are many books on German music and KRAFTWERK in particular, what inspired you to compile ‘German Pop Music – A Companion’? 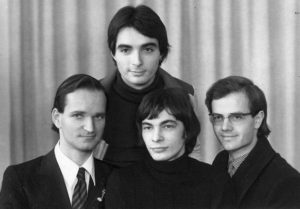 Indeed, there has been a real upsurge in – mostly though not always – excellent books in English on topics such as KRAFTWERK, RAMMSTEIN, Krautrock, the Berlin music scene or German punk.

However, what I felt was missing was a kind of foundational work, a book that provides an overview of the entire landscape of German pop music.

The approach to the book is quite different to others, more like an academic guide aimed at students rather than music fans?

Yes, it is an academic book from an academic publisher. What I tried to achieve as editor, however, was to make this introduction accessible to both the general public and an academic audience. And that means: the target audience comprises not only of students, but also language instructors who want to use song lyrics for teaching purposes, or – say – researchers on French punk, who need an introduction to German punk in English.

Ralf Hütter described KRAFTWERK as Industrielle Volksmusik; this is an apt description as KRAFTWERK’s melodies often came from a classical tradition with a catchy simplicity that wasn’t far off Schlager… what are your thoughts on this?

Ok, I accept “classical tradition” but not Schlager, my dear! Though you have a point, of course, as KRAFTWERK’s music indeed represents an elevated form of simplicity, and it is their very combination of avant-garde electronic sounds and captivating, simple yet sophisticated melodies that makes them great.

In the book, you are dismissive of ‘The Model’ which could be described as KRAFTWERK’s best and perhaps only pop song. As this is most people entry point into KRAFTWERK and one of the few synthpop No1s in the UK, what are your reasons for this view?

Well, I never really personally liked that song more than any of their other great songs. I think I am dismissive of it as indeed it is the odd one out on the futuristic ‘Die Mensch-Maschine’ album, and it is too close to a mainstream hit record for my taste.

But don’t forget: the book is academic in nature, and it is the essence of critical thinking to revise established notions and to question received beliefs… but, to be honest, I also did it to tease the readers a little! *laughs*

But the DURAN DURAN world of models, clubs and “KORREKT” champagne depicted in ‘Das Modell’ was a reflection of KRAFTWERK’s real lives off-duty… or does all this spoil the illusion of “der Musikarbeiter”?

Yes, you are right in this respect. The song is the one exception in a body of work that is dominated by the strictly adhered to aesthetics of man-machine, futurism, technology and so on.

‘A Little Peace’ by NICOLE is described in the book as representing the end of the Schlager’s golden era, but lest we forget, it was actually the third German song to become a UK No1 in 1982 after ‘The Model’ and GOOMBAY DANCE BAND at the height of the New Romantic movement…

Yes, and I hadn’t known about this success in the UK until I started work on the book. I only knew that NENA’s ‘99 Luftballons’, in the original German version, was a hit in the USA too. I still vividly remember both songs when they came out – I hated NICOLE and loved NENA. 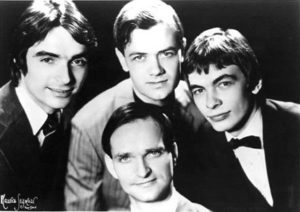 While ‘The Hall Of Mirrors’ has one of the better lyrics and is almost a spoken word piece, on the whole KRAFTWERK did not break the lyric bank, as exemplified by the title repeats as the vocal toplines of ‘Spacelab’ and ‘Metropolis’?

Indeed, and I think that was a good strategy. The music is powerful enough to speak for itself. Better to forego song lyrics than to use crappy ones….

You rightly highlight ‘Computer Love’ as visionary, predicting the society’s reliance on internet dating and social networking in a world of personal isolation. In many respects, this is the most human of all KRAFTWERK recordings?

Yes, probably… and lonely KRAFTWERK fans will have a hard time meeting women at their gigs, as it is always mostly blokes in the audience. Clearly, female KRAFTWERK fans are more interesting because many male fans hold views of German culture that I sometimes find problematic as a German.

Also, being in favour of the Brexit and liking KRAFTWERK don’t seem mutually exclusive in this country, sadly.

Your text refers to another academic Dr Alexei Monroe’s assertion that ‘Numbers’ is “dystopian”… but surely, it’s a just a high quality novelty track with multi-lingual counting that’s got a good beat??

Alexei is spot on with his view, I think, and that is why I quote him. The genius of KRAFTWERK is that their art works perfectly on different levels. Children love ‘Die Roboter’ or ‘Autobahn’ for obvious reasons, yet these are two of the greatest works of art in twentieth-century music. And in the same sense, ‘Nummern’ is both a novelty song and a radical piece of concept art that sparked electronic dance music.

So what do you think of the view that the reclusive legend behind KRAFTWERK has perhaps caused them to be over-intellectualised in more recent years?

I guess I am the wrong person to ask this question. After all, it is my – self-chosen – job to intellectualise about the band, or to be more precise: their music and artistic concept. And, along with the publications by my colleagues, I think we only just started…

Do you have any purist view as to whether KRAFTWERK should be listened to in English or German?

Of course – in German only! 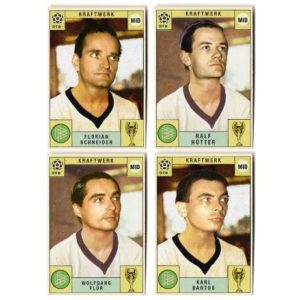 While German electronic pop music is of valid cultural importance, it did take British bands like ULTRAVOX, OMD, THE HUMAN LEAGUE and DEPECHE MODE to make turn the roots of it into an internationally recognised art form?

Yes, I think one can see this as an equalizer after KRAFTWERK had scored first… *laughs*

What did you think of the later German electronic pop acts that had European success while singing in English, like ALPHAVILLE, CAMOUFLAGE, WOLFSHEIM, DE/VISION and U96 after KRAFTWERK?

To be honest, I never really cared about them, except maybe for ALPHAVILLE. I truly love PROPAGANDA, though.

In the book, Alexander Carpenter asks the question “Industrial Music as ‘German Music’?” As a German living in the UK, how do you feel about the image and sound of more aggressive bands like DIE KRUPPS, DAF and RAMMSTEIN who actually sang in German?

It all depends. I have always been a devoted fan of EINSTÜRZENDE NEUBAUTEN and really like much of the early DIE KRUPPS stuff. Their latest release ‘Stahlwerkrequiem’ is also a triumph, in my mind. Gabi and Robert from DAF are my heroes – hearing ‘Der Mussolini’ for the first time in a student disco was one of the things that changed my life.

RAMMSTEIN are just pathetic. To quote Ivan Novak from LAIBACH: “RAMMSTEIN are LAIBACH for adolescents and LAIBACH are RAMMSTEIN for grown-ups…”

What, to you, have been the true indicators that German pop music has indeed crossed over onto the world stage?

That is a difficult question… maybe that many people would agree to the claim that KRAFTWERK were more influential than THE BEATLES?

ELECTRICITYCLUB.CO.UK gives its warmest thanks to Dr Uwe Schütte

edited by Dr Uwe Schütte is published by De Gruyter, available from all good book retailers