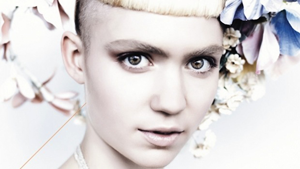 Also dropped in for good measure is footage of her with a variety of musclemen and partying frat brats.

As per the title of the song, Claire is cutely oblivious to all that is going on around her. This LYKKE LI fronting KRAFTWERK tune is sumptuously infectious while the approach to the visuals is both fresh and humourous. ‘Oblivion’ is probably the most immediate track on the ‘Visions’ album, although other tracks like ‘Genesis’ and ‘Be A Body’ explore similarly accessible synthesized avenues.

‘Visions’ is a challenging but joyful experience that will reward the determined listener looking for subtler colours in the electronic music tapestry.