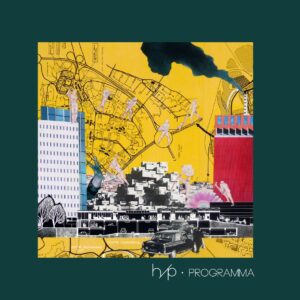 With cult French nouveau vague exponents such as MARTIN DUPONT, RUTH, MATHÉMATIQUES MODERNES, ELLI & JACNO, MODERNE, KAS PRODUCT, TAXI GIRL and DEUX all being re-evaluated of late, it is perhaps only natural that their 21st Century successors have been getting attention in their wake.

Once such act are Limoges-based H/P; formally known as HAPPINESS PROJECT, they independently released their first album ‘Remove Or Disable’ in 2008 and signed to local label BOREDOMproduct who issued their next two long players ‘9th Heaven’ and ‘Mutation’.

For ‘Programma’, not only have the trio shortened their moniker, they have forgone conventional identities in that CLIENT fashion and now appear as shadowy figures in their photos. But this is not merely cosmetic as F/T (lead vocals + synths), C/P (lead + backing vocals) and C/T (synths, string machine, piano, bass guitar + backing vocals) have adopted the minimal synth approach using the tactile controllability of analogue sequencers and the gritty snap of vintage drum machines.

This is a far cry from the denser austere of older songs such as ‘Poupée Mécanique’ and ‘Big Cities’. Now what remains as the trio put it is “Sober and sophisticated, a signature stripped of the superfluous: from now on this is h/p, simply” although their male / female vocal duality and lyrical gists on the human condition are still present and correct.

Shaped by charming girl-boy vocals, cold wave electronic effects and an array of synthesized melodies, ‘I Prefer Two’ is a delightfully odd but accessible opening statement. With a blippy Motorik drive, ‘The Alarmist’ is hauntingly glacial with a pretty array of synthetic strings amongst various intersecting lines while even the slightly off-key voicing is enjoyable.

Recalling ULTRAVOX, a chunky bass synth sequence acts as the backbone to ‘Black Tea’ which uplifts in a wonderful chorus with another girl-boy harmony following the goth rooted verse. This is all counterpointed by ring modulation while the middle eight presents some pitch bent texturing for one of the album’s highlights.

Female-led vocally at the start of each verse, ‘9 Mars’ is distinctly more minimal but displays a mechanical heart as it paces up. The filmic ‘Programma’ title song combines pulsing robopop with eerie synthetic whistles to further the mystery but ‘Behind’ presents drones and conversely, a piano laden structure.

Another highlight, the authentically synthtastic ‘Ultraviolin’ sounds as if it has been beamed from a past era, utilising stabbing and swirling keys over a precise rhythmic pattern. Meanwhile, acknowledging the debt of influence to MARTIN DUPONT, their bassist Alain Seghir guests on the glorious ‘Vicinities’; applying a looser construction compared with the other tracks on the album and a more complex spiral of delicate blips, enclosed is an emotional centre that recalls OMD for possibly the album’s stand-out song to close. 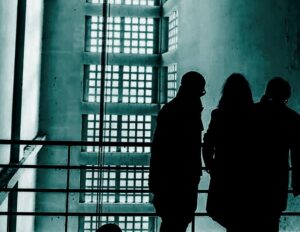 With an elegant retro-futuristic presence and a subtle melancholy, ‘Programma’ embraces a period when limitations and rules helped control the fun.

Despite these avant synth palettes being considered soulless and cold back in their day, four decades on, those vintage sounds have stood the test of time with souls and characters of their own as focussed emotive art. H/P have made that ethos relevant to the uncertainties of today.

‘Programma’ is released by BOREDOMproduct in vinyl LP, CD and digital formats, available from https://boredomproduct.bandcamp.com/album/programma-album

Posted in Reviews Tagged with h/p