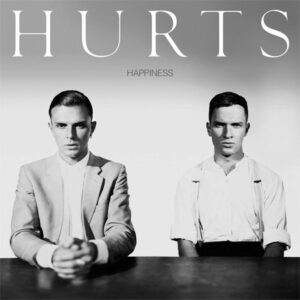 “After buckets of blood, tears and gold and emptying the contents of our hearts, it is now over. We feel proud to announce that we will call our child ‘Happiness'” was how HURTS announced the arrival of their debut long player.

Consisting of singer Theo Hutchcraft and instrumentalist Adam Anderson, melancholic optimism and music of distinct quality remain their passion and goal. Following a period of relative inactivity using the less means more philosophy, HURTS have finally allowed the public hear what the fuss has been all about following the appearance of the monochromatic viral video of ‘Wonderful Life’ over a year ago.

With approval from no-less than Claudia Brücken of PROPAGANDA whose ‘Dr. Mabuse’ was a big influence on the track, ‘Wonderful Life’ has no less impact now even in slightly remixed form and remains electrifyingly elegant.

Like most of the ‘Happiness’ album, it is also has a distinctly European sound. Produced by Jonas Quant and Joseph Cross along with HURTS, their overall sound is more of utilising gadgetry to avoid landfill indie and R’n’B cliques rather than being a distinct synthesizer duo.

So ‘Happiness’ features guitar, sax and piano alongside lush orchestrations and big drum sounds housed within a deep compression chamber. Cultivated mostly at a moody mid-tempo pace, this provides a misty film noir sophistication although with its lack of distinct dance beats, this soundtrack is not for shallow heads and hearts.

‘Better Than Love’ is one of the lost singles of 2010. Its euphoric nature almost sounds strangely out of place on ‘Happiness’ but some enhanced percussion adds extra bite compared with the single version. Uptempo and sparky, the only let down in an otherwise very good pop tune is the 90s boy band bridge after the chorus. It is the tendency to enter this territory, especially on the ballads that could be considered HURTS’ weakness. Most of the time, they get away with it but here, they don’t.

The slow ‘Blood, Tears & Gold’ was inconclusive on its initial appearance as HURTS’ second viral video but actually comes across very well on record thanks to the widescreen production – do not listen to this as a download or on YouTube, half the grandeur will be lost. Meanwhile on the superb ‘Sunday’, HURTS up the tempo with some pulsing octave shifts and become ULTRAVOX with a touch of A-HA. Sumptuous Eurocentric electronics add theatre to the punchy textural dynamics.

‘Stay’, a slightly more vibrant but intense cousin to ‘Blood, Tears & Gold’, is broken and affecting. Here, Theo exposes a feeling of melodramatic despair but the chanting chorus somehow lifts and soars. With backing of epic proportions, ‘Evelyn’ could lyrically even be a haunting male take on GOLDFRAPP’s ‘A&E’; “Stay with me Evelyn” cries Theo, “Don’t leave me with the medicine!”.

A burst of Gallic accordion introduces ‘Devotion’ and sees Theo duetting with KYLIE MINOGUE, HURTS having already brilliantly covered ‘Confide In Me’ on a Biz session recently. In a similar vein to ‘Confide In Me’ if a little darker, ‘Devotion’ is actually much more convincing than ‘In Denial’, Ms Minogue collaboration with PET SHOP BOYS. A brilliantly uplifting chorus makes this a beautiful album highlight. ‘Unspoken’ is already known by some in the form of a frantically rhythmical remix by Fred Falke. Now as a stark ballad, the orchestral arrangement is punctuated with heavy synth bass and piano which works well, especially as the song builds to a cohesive climax.

‘The Water’ provides an emotive finish to the collection, starting with just piano before becoming a full on classically laden movement… this could be the missing Part 4 of MUSE’s ‘Exogenesis: Symphony’! But there’s an extra treat in hidden track ‘Verona’ which starts with the ocean waves and some piano in waltz time. Eventually joined by a string quartet, it turns into a bit of a Mediterranean sea shanty! 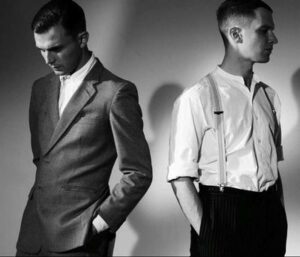 However, the two songs in the HURTS catalogue which, judging by the demos and live renditions, had the greatest potential are sadly the album’s disappointments. ‘Silver Lining’ which opens ‘Happiness’ originally possessed the gothic percussive drama of ‘Songs of Faith and Devotion’ era DEPECHE MODE accompanied by the devil’s choir from ‘The Omen’. But this has been watered down and the final take severely lacks impact. As a development of the ‘Silver Lining’ template, ‘Illuminated’ also had its own pensive tension but the neo-operatic edge that was prominent in the earlier version has now been lost.

Both tracks should have turned out more like the magnificence of either ‘Devotion’ or ‘Stay’. In some respects, this album could be compared to TEARS FOR FEARS’ ‘The Hurting’; terrific in places but with missed opportunities on some truly great compositions.

Worthy of mention though not on the album is the missing title track ‘Happiness’ with its metallic percussion, histrionic synths and rousing chorus. Available as a download from Amazon, it is a glorious highlight in their live show and thoroughly deserved inclusion on the final tracklisting. The final solution may be then to see HURTS live!

HURTS were in danger of being considered style over substance. While not entirely meeting expectations, ‘Happiness’ has many outstanding moments. But there is still more promise to be unlocked. If the SCOTT WALKER of circa 1967-69 had the 21st Century instrumentation available to him then, he would sound like HURTS. Like Theo and Adam, when he was good, he was simply out of this world.

is released by Major Label/Sony Music on 6th September 2010

Posted in Reviews Tagged with A-HaHurtsUltravox