May 23, 2015 / electricityclub / Comments Off on Introducing BLACK NAIL CABARET 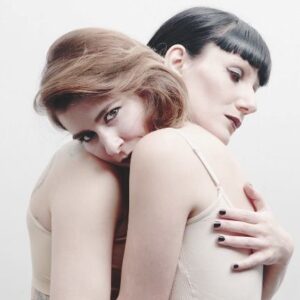 Fresh from supporting German veterans CAMOUFLAGE on their recent tour are Hungarian duo BLACK NAIL CABARET. Having previously supported COVENANT and DE/VISION, the pair have been impressing audiences with their brooding form of electro.

Hailing from Budapest, Emese Illes-Arvai (vocals) and Sophie Tarr (keyboards) formed in 2008 and one of their first recordings was a darkwave cover of RIHANNA’s ‘Umbrella’. They released their debut album ‘Emerald City’ in 2012 with one of the highlights being the gothic trance pop of ‘Hangman’ and the single ‘Veronica’.

Unleashed last Autumn as a taster for their second album ‘Harry Me, Marry Me, Bury Me, Bite Me’, ‘Satisfaction’ is a magnificently moody example of how BLACK NAIL CABARET have made a sonic leap forward since their debut.

While the darkness remains, there is clarity amongst the melancholy as the lyrical couplet “Don’t you cry, don’t be whiney” demonstrates. Like DEPECHE MODE reimagined for a Weimar Cabaret set piece, ‘Satisfaction’ is wonderful synth noir laced with eerie string machine and a steadfast mechanical beat.

The new album develops on the promise of ‘Emerald City’ by being stern and unsmiling, yet embroiled in cautious optimism. This is best represented by the vibrant Marilyn Monroe tribute ‘Blonde’ which attaches some Casiotone bleeps to a template that is akin to THE CURE gone synthpop.

The appealing European melancholy of ‘Lovely Girl’ is bolstered by pizzicato violins and fizzy electronics while the Schaffel flavoured ‘Down Again’ will connect with anyone whose favourite track on ‘Delta Machine’ was ‘Should Be Higher’.

BLACK NAIL CABARET’s rich character undoubtedly comes from the deep vocal tones of Emese Illes-Arvai, but without Sophie Tarr’s intuitive backing, they would not have the sympathetic backdrop to prosper, as the solemn Gregorian allure of the excellent album closer ‘The Burial Party’ proves. It is a rather good period for dark female duos at the moment.

‘Harry Me, Marry Me, Bury Me, Bite Me’ is released by Basic Unit Productions on CD and download, available from http://basicunitproductions.bandcamp.com/album/harry-me-marry-me-bury-me-bite-me