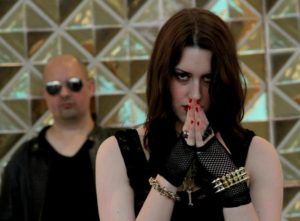 Californian-based NIGHT CLUB formed in 2011 when vocalist Emily Kavanaugh and producer Mark Brooks began writing songs that combined the pure pop of PINK and BRITNEY SPEARS with the much heavier spectre of SLAYER into a danceable, electronic underworld.

Their respective life experiences led them into this darker territory as Kavanaugh dealt with her father’s untimely death while Brooks faced his own demons.

NIGHT CLUB are best represented by their most immediate number, the Britney gone Emo of ‘Poisonous’ and the friskily minimal ‘Give Yourself Up To Me’. Positively feline but dysfunctionally dark, ‘Poisonous’ bases itself, like STEFY’s lost 2007 single ‘Chelsea’, around the riff of ‘Sweet Dreams (Are Made of This)’.

This superb slice of catchy electronic pop from the LA combo of Emily Kavanaugh and Mark Brooks rouses with a huge crossover potential while possessing a cutely subversive and sinister edge. Kavanaugh recently described their musical DNA as: “If Depeche Mode f*cked Britney Spears and had a baby who hung out in dark corners of seedy clubs, then that baby would be us.”

By way of a connection, NIGHT CLUB open for cult new wavers BOOK OF LOVE who supported DEPECHE MODE on the ‘Black Celebration’ tour on 8th October 2013 at Los Globos in Los Angeles.

‘Night Club’ and ‘Love Casualty’ are released by Gato Blanco and available as downloads from Bandcamp, iTunes and Amazon