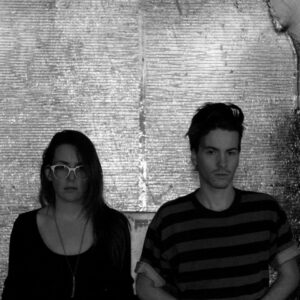 With AUSTRA returning following their acclaimed 2011 debut album ‘Feel It Break’, a side project during their hiatus originally featuring their drummer Maya Postepski has almost passed under radar but deserves recognition.

TR/ST started as a synth duo comprising of Postepski and Robert Alfons who released their debut album ‘TRST’ back in early 2012 on the Arts & Crafts label.

Formed in 2010 in Toronto, they released their debut EP ‘Candy Walls’ in 2011 on Brooklyn imprint Sacred Bones Records.

Like AUSTRA, the music is swathed in electro-gothic grandeur but differs in that it features predominately male vocals. The hypnotically sombre ‘Bulbform’ has been their calling card and features a grainy retro-futuristic video cut from archive fashion footage…

Meanwhile the album ‘TRST’ features a number of impressive tracks including the minimal ‘F.T.F.’ which features Postepski duetting with Alfons, her voice possessing the sinister spectre of LADYTRON’s Mira Aroyo.

However, with AUSTRA releasing a new album ‘Olympia’ in June, Postepski has returned to the band while Alfons is currently completing a North American tour and working solo on a second TR/ST album.

‘TRST’ is available via Amazon, iTunes and the usual digital outlets