In the frozen depths of the Synthy Nordic basin hides one of the greatest European music producers, turning out accomplished pieces of capable electronica, both for himself and as the part of various collaborations with JOHN FOXX, PROCESSORY and SIN COS TAN.

The love of Detroit techno has always added a certain dose of magical rhythmic edge to his productions, although bred on the likes of JOHN FOXX, PET SHOP BOYS and NEW ORDER’s synthesis, the man from Turku on the southwest coast of Finland, creates his very own discernible sound.

Keen to explore unusual possibilities of synthesis, the Finn assembled a group of nine like-minded buddies, where each of them operated a little acid box of crafts, otherwise known as the Roland TB-303, conducted and mixed by the man himself. The project called THE ACID SYMPHONY ORCHESTRA famously supported KRAFTWERK during their Finnish date in 2009.

To add to his interesting outings, Hulkkonen joined forces with his fellow Finn Jimi Tenor to showcase their silent movie ‘Nuntius’, which improvised soundtrack was presented to live audiences for a unique audio visual experience. But presently, the Finnish master returns with a brand new album, ‘Don’t Believe In Happiness’

, marking the release of his long player number twenty!

And indeed from the opening ‘Tintån Terdel’, with its pleasantly satisfying star gazing textures à la early PSB, offers floaty qualities of capable musicality, until the gratifyingly uncomplicated ‘New Ideologies’, Hulkkonen takes one onto a journey of the familiar unknown. The title track glides masterfully over the sedate instrumentation; soothingly enticing and teasing, while ‘I’m Just A Phase I’m Going Through’ introduces more powerful synth beats and the faster tempo.

‘We Will Tear Love Apart Again’ steadies the beat into a mantra, which hypnotises and mystifies, while ‘Lowlife Crises’ generates the nostalgia for the easy listening tracks from the best synth years. The arty, GAZELLE TWIN-like elements are introduced in ‘Reach Out To China’. The excellently synthesized noises capitulate to the simplistic melody, to be reintroduced towards the end of the track, creating an open-closed masterpiece of electronic pleasure.

‘I Think About Your Car When I Drive Mine’ shines with the use of assorted synth noises, only to progress into the inconspicuous ‘Sometimes You Win, But Not Very Often’.

The rhythms reminiscent of MOLOKO dazzle on ‘I Am The Night’ and ‘Moon Is Real’. With a more defined beat and creative use of instrumentation, Hulkkonen creates his very own take on bossa nova, Suomi style. They’re the two perfect dance tracks. 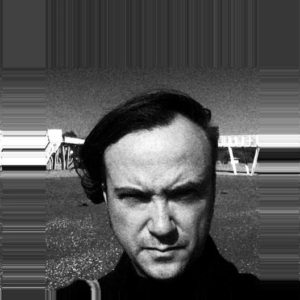 ‘Water Wars 2021-2027’ brings the futuristic vision of sci-fi inspired things to come. Almost tribal, the ringing rhythms manage to anaesthetise and stupefy, meandering through the computerised textures and vivacious elements.

‘Don’t Believe In Happiness’ is like being taken onto a journey into the depths of yourself, discovering the familiar unfamiliarities and being soothed by the powerful self, all at the same moment.

Opus number twenty marks the number of the gratifying achievements, all coming out from within. It’s sedate yet uplifting, grandiose yet simplistic, raw yet polished to perfection.

Jori Hulkkonen has reached the status of god and he deserves every inch of the success that comes his way. With the ergonomic musical design to suit all users, this record is simply superb.

is released by My Favorite Robot Records