July 2, 2018 / electricityclub / Comments Off on JUNO REACTOR The Mutant Theatre

Fusing the genres, bending the rules, twisting the traditions and cooking up a mish-mash of ordinary and unexpected, is what JUNO REACTOR do best. 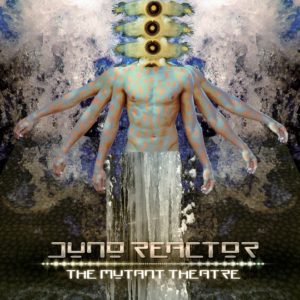 Roughly described as electronic trance doesn’t quite portray what Ben Watkins of London does with his projects. Sure it’s something one would expect walking into any branch of Cyberdog, if you include the colourful UV light responsive garments and strobes, but the collective are responsible for far more than that.

Combining art, cinema and working with the cream of world renowned musicians, the group has gained international acclaim through their breathtaking performances, full of theatrics, amazing costumes and vivid lighting.

And that’s not all; JUNO REACTOR are behind the soundtrack to ‘The Matrix Trilogy’

none the less, as well as for numerous games and other movies. Having opened for MOBY, they also collaborated with THE CREATURES and various acclaimed directors and artists, while releasing eight albums of supercharged trance gems. Now comes opus number nine with ‘The Mutant Theatre’

‘Juno Reactor & The Mutant Theatre’ is a name for the live show from the collective, gathering Watkins himself, Taja Devi and Tal Tula Ben-Ari on vocals, Nataly Hay in charge of dance, Amir Haddad on guitars, Johann Bley on drums, joined by Agnivo and Stigma Show, as well as visual performance troupes from Russia. 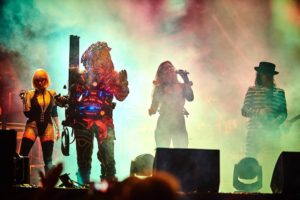 The album features tracks from the show, with ‘Our World’ as the first single.

The hardness of the sound blends in with the otherwise inconspicuous beat, forcing its way through the meanders of drums, twists, steps and processed voices, saying “our world will never feel the same again”. Supported by female vocals, the beat rolls down the steps of fascinating depth and maturity.

But the bigger surprise is the ethnic sounding ‘The Return of the Pistolero’, with its Mexican inserts and guitar a la Zorro. And ‘Pistolero’ does indeed make his return from JUNO REACTOR’s single released in 2000.

The gunman’s comeback is fiery and pulsating with newly found urgency, which continues into ‘Let’s Turn On’, where the mantric rhythm starts the dance machine as if on demand. Thinking of FIFI RONG’s latest video? This is exactly like that, but on trance steroids (with an added dose of Melodyne)!

‘Dakota’ is an Native American song transgendered into a club classic, while ‘Alien’ sounds as extra-terrestrial as can be, with that classic trance pirouette, before it gets heavier, more extravagant and more on speed.

When it rains, ‘The Sky Is Blue The Sky Is Black’ and “you need the total control”. “There is no place for fear” and JUNO REACTOR fears nobody, and with the whole package, why should they? After all, ‘Showtime’ is what it’s all about, and here the melody shines through with the rough musicality which is Love Parade worthy, bringing the oblivion to the limits of the universe and beyond. Is there anywhere ‘Voyager 304’ can reach? 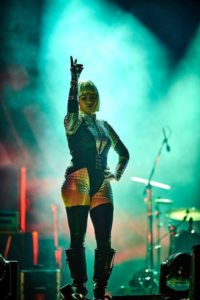 The closing ‘The Tannhäuser Gate’, with its title taken from ‘Blade Runner’ and ‘Soldier’ movies, referring to a kind of warp station, named after a German poet of the Middle Ages, sums up the opus with a surprising mood shift.

Slower, more sinister and very cinematic, it wraps up the production with an uneasy feeling of doom at the point of no return. Are we entering a parallel dimension, and if so, is it a positive?

With ‘The Mutant Theatre’ release, followed by globe-spanning shows from Caesars Palace in Las Vegas to Mount Fuji in Japan, JUNO REACTOR and co will be busy this summer and autumn and if there’s a gig worth seeing, that would be it!

Best viewed as a package, the trance electronica lends itself fabulously to the intricate show, full of dance, light and madness, Ben Watkins style.

is released by Metropolis Records in vinyl LP, CD and digital formats