September 26, 2012 / electricityclub / Comments Off on METROLAND Mind The Gap 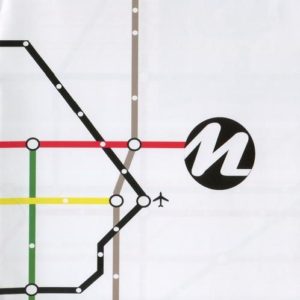 Here is a really nice surprise that strikes like a lightning bolt from a clear blue sky: Belgian electroheads METROLAND and their epic rail bound technopop-journey in the spirit of KRAFTWERK and KOMPUTER.

The theme of debut album ‘Mind The Gap’ s thus railroad traffic and mostly underground travel. The trip spans over 13 (railway) tracks and begins quietly and beautifully with the warm arpeggio rich soundscapes built up in ‘Enjoying The View’. The feeling of going by train at moderate pace through Europe is really palpable.

The following song, ‘Mind The Gap’, takes us to the London Underground and then the journey proceeds to Germany, New York, Brussels and Moscow. The tempo is increased gradually and the songs become more and more dancefloor friendly.

The very Kraftwerkian rhythms are perfect and the sounds are always exquisite. However, it is not only KRAFTWERK and KOMPUTER that are cloned. Inspiration from early FRONT 242, JOHN FOXX & LOUIS GORDON, JEAN MICHEL JARRE, KARL BARTOS and not least TELEX is present too.

Being a Swede, I am also thinking of Swedish bands like DDR, TRANSFORMATION STATION and not least DEUTSCHE BANK, but that is probably a coincidence since these bands are heavily inspired by KRAFTWERK too. We who have a soft spot for voice synthesis from vocoders and the Speak & Spell toy obviously get our fair share, but some songs also feature sampled female voices, providing this very electronic train ride with a bit more organic feel and variety.

This is a true concept album, well thought out and implemented with classic Klingklang perfection. It is therefore hard to pick out a favourite song – if you like the first song, you almost certainly like the rest too. 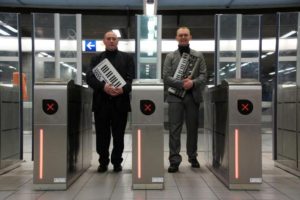 However, I have noticed that I’ve been saying: “He was called – Harry Beck” and “form follow function” spontaneously to myself now and again, which probably indicates that the song  ‘Harry Beck’ can be considered one of my favourites. Other highlights are ‘Travelling’, ‘The Passenger’, ‘Theme For Metroland’ and ‘T.F.L.’ – you might actually say that METROLAND almost sounds more KRAFTWERK than KRAFTWERK themselves have managed to do in recent times.

However, critics may argue that it is not that original trying to mimic KRAFTWERK, but METROLAND’s Passenger A and Passenger S do it with so much love and warmth. They really put their hearts to it. They do not try to hide their sources of inspiration either. The penultimate song title is, for example, a clear KRAFTWERK paraphrase; ‘It’s More Fun To Commute’. This song is seamlessly followed by ‘(Much) More Fun’ which is a wonderfully rhythm-driven song in the spirit of ‘Numbers’ and ‘Home Computer’.

For us KRAFTWERK-nerds, METROLAND is a very nice new acquaintance indeed.

‘Mind The Gap’ is released by Alfa Matrix in CD, 2CD Limited Edition and download formats

Posted in Reviews Tagged with KomputerKraftwerkMetroland