June 28, 2012 / electricityclub / Comments Off on MIRRORS Between Four Walls 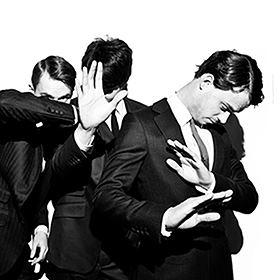 “Do you ever wonder how you’ll ever get there when you never turn back around?”

What have ‘Lights & Offerings’, ‘Broken By Silence’, ‘Toe The Line’, ‘Falls By Another Name’ and Perfectly Still’ all got in common?

They are all tremendous B-sides from the MIRRORS’ catalogue.

And the latest in this impressive lineage is the beautifully stark drama of ‘Between Four Walls’, the flip of their recent self-released single ‘Hourglass’. US blog Bop 2 Pop described the track as “sublime”.

While ‘Hourglass’ sees an echoing drum machine is met with a cacophony of sombre synth strings and hauntingly melancholic vocals, ‘Between Four Walls’ indicates that MIRRORS are heading for a sparser, textural direction while still retaining those emotive melodic components, as hinted at by the newly recorded songs ‘Dust’ and ‘Shooting Stars’ from the ‘This Year, Next Year, Sometime. . . ?’ EP issued earlier in the year.

Attentive to minutiae in every aspect of their art, the properly avant pop ‘Between Four Walls is accompanied by a stylish kaleidescopic film which appears to have been partly influenced by a fan made driving video of their own ‘Broken In Silence’. Whatever, the visuals totally capture the 3am on the Autobahn feeling of the song.

‘Between These Walls’ and ‘Hourglass’ are available digitally from http://mirrorsofficial.bandcamp.com/

Posted in Reviews Tagged with Mirrors