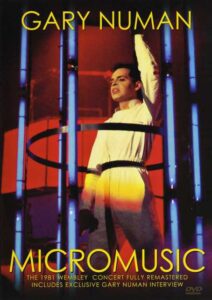 GARY NUMAN was one of the UK’s biggest stars. In the space of just two years he had amassed three number 1 albums; two number 1 singles and a huge legion of fans. However, his overnight success came at a price.

He was vilified by the UK press, and away from the spotlight he was beset by a lack of self-confidence. As a result, at the height of his fame in 1981, he announced his retirement from live shows.

To mark the occasion he staged a spectacular farewell concert over three nights at Wembley Arena. This farewell show is now available for the first time on DVD, with remastered sound and a new interview with Gary Numan. Watching the DVD, the first thing that strikes you is the sheer scale of the production.

By 1981 Numan had already established a reputation for his extravagant stage sets, and for these final concerts he was determined to go out in style. The Wembley stage featured huge towers of light panels; revolving pyramids and a remote-controlled car, all amid a sea of dry ice. According to his lighting designers at the time, the show took two months to construct and cost Numan around £150,000 to stage. Watching this DVD it’s easy to see why! 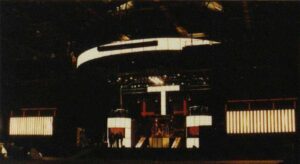 The two hour set mostly comprises material from his three classic albums: ‘Replicas’, ‘The Pleasure Principle’ and ‘Telekon’. As a body of work it is consistently impressive. The likes of ‘Cars’ and ‘Are Friends Electric?’ are here of course, but there are a number of album tracks that could just have easily been singles; eg ‘Metal’, ‘Films’, ‘I Dream of Wires’.

Numan now says that one his reasons for retiring from live shows was to hone his songwriting skills, but ironically many of his best songs had already been written! Numan himself is a great showman, prowling the stage, mouthing silent words, and gazing out from the stage with that distinctive alien stare. It is that look which is so mesmerising and has kept fans coming to his gigs after all these years.

In spite of his robotic detachment, this is at times an emotional show. Red roses and teddy bears are thrown onto the stage by adoring fans. Towards the end of the set Numan sits on the edge of the stage to sing ‘Please Push No More’ and his ice-cool composure visibly cracks. The lyrics “now it’s all over for sure” will bring a tear to the eye of any fan of this genre! At the end of the show, after a roof-raising ‘We Are Glass’, Numan poignantly says “this has been the greatest two years I’ve ever had, thank you”, and then he is gone; an icon bowing out long before his time.

Numan’s retirement from touring was, as it turned out, short lived and he was back on the road just over a year later. The ‘Micromusic’ DVD includes a fascinating present-day interview, in which Numan talks candidly about the farewell shows and his reasons for retiring. At the time, he says, it felt like the right thing to do as he found it hard to deal with the constant attention from the press and the fans. But at the very moment he left the stage, he knew he had made a huge mistake. To sum up, he now says of the show, “I’m really proud of it, but wish I’d never done it”.

Having watched the ‘Micromusic’ DVD, I caught up with ELECTRICITYCLUB.CO.UK’s Chi Ming Lai who was lucky enough to be at the final Wembley show back in 1981… 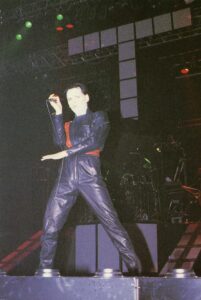 I really enjoyed watching this DVD but nothing can compare to being there! Tell us what it was like.

It was my second ever concert and it was jaw-dropping! It made such an impression on me that I can still remember moments from it distinctly. Even little things like guitarist RRussell Bell doing a Bez-like handclap dance during ‘M.E.’, TIK and TOK’s robot movements to ‘I Dream Of Wires’ and the male members of the audience wolf whistling when it appeared that one of the girls from SHOCK was topless during her routine to ‘Trois Gymnopedies’!

My particular highlights included ‘Everyday I Die’ when he shone a huge spotlight into the audience, his robot car in ‘Down In The Park’ (although it does look like a Gothic Sinclair C5 now!) and everyone singing along to ‘Please Push No More’.

But it really was all brilliant… even the moment when the band got out of synch with the ‘She’s Got Claws’ backing tape! It was a brand new song at the time so no-one really noticed, even though it sounded a bit odd!!

Songwise, the set list was a perfect example of Numan in his prime. All his best stuff got played that night and there was the live premiere of ‘Complex’ too. But even before it all started, the atmosphere on the floor area was electric, people were already standing up and there was a big surge to the front. Unfortunately, I was stuck in the upper tier so the show was a lot more detached at our end… people didn’t feel able to get up and dance until the encore and we were pretty envious of all the fans below.

The stage set looks immense. How impressive was it in real life? Have you seen anything to top it since?

The stage set was fantastic, I mean it was enormous. For the era, it was massive! There was the ‘Teletour’ towers set, the panels of the ‘Touring Principle’ tilted over on either sides of the stage and a new flying saucer rig hanging above. The footage on ‘Micromusic’ captures it quite well but you really had to have been there, although at no point do you actually see the whole stage set. I honestly don’t think I’ve personally seen anything like this in terms of stage hardware as opposed to LED screens until MUSE’s ‘Haarp’ show at Wembley Stadium in 2007.

It’s also been said that this show was really loud! In the interview on the DVD, Numan claims that low frequency speakers were installed under the floorboards of the arena, so that the venue literally shook when the low notes were played! Is this something you remember? Has your hearing recovered yet? 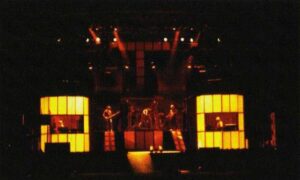 I don’t remembering it being really loud but it certainly wasn’t quiet. I guess I was too far away from the stage to have really felt the sound as much as those on the floor. The OMD concert I’d been to a few months before was bloody loud though, the bass was really thumping on my chest there and my ears rang for two days!

At certain points in the show, Numan seems quite emotional. Was it an emotional occasion for you?

I definitely remember having a lump in my throat during ‘Please Push No More’ and I could see he was a bit choked… it’s more apparent if you watch the DVD. The performance seemed to say it all, especially when he changed some of the lyrics to suit the occasion. It made me realise what a great song it was having not given it the time of day before.

But GARY NUMAN will always mean something to me; I wouldn’t have got into electronic pop music without him. Yes, it was around before and DAVID BOWIE will say that he nicked all his ideas but Numan was of our generation, our very own hero. I’m a fan of Bowie, but he will never mean as much to me as Numan because it was ‘Are Friends Electric?’ in ’79, not ‘Starman’ in ’72 that I saw on ‘Top Of the Pops’ at that special moment in my life when I was ready to discover something for myself. There really is a unique innocence that gets you following your favourite artists. So for that reason, I can understand why synthpop fans a few years younger than me revere HOWARD JONES!! *laughs*

I finally got to meet GARY NUMAN in 2002 and had my photo taken with him… I have to say, I was absolutely thrilled!

At the time, did you believe that this would really be his last live show?

All us Numanoids really did think Numan was going to pack it in for good so there was definitely an air at Wembley that the fans were going to give him the biggest send-off possible.

And it was all very sad when it all ended, but then I got back to school and remembered this group JAPAN being mentioned by Numan in his interviews at the time. So after hearing their brilliant ‘Quiet Life’, I transferred all my energies getting into them! Teenagers can be terribly fickle I’m afraid!

In hindsight, I personally think Numan may have returned to the stage too soon after retiring. It was just over a year after Wembley that he did those low-key ‘I Assassin’ club gigs in America.

And then, he did that big ‘Warriors’ comeback tour in ’83. There hadn’t been enough time for people to miss Numan or for the critics to realise just how important he’d been to whole synthesizer thing.

It probably didn’t help that Numan appeared to lose his musical direction after those Wembley concerts. It’s understandable really because he was only 23. 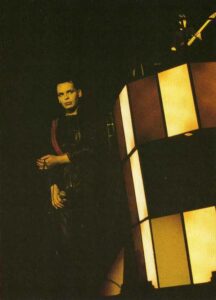 ‘Dance’ was interesting, but was probably the wrong album at the wrong time and it outstayed its welcome by at least 20 minutes! ‘I Assassin’ had some great stuff on it, but was patchy. And I never liked ‘Warriors’ at all, I still don’t!

He seemed to have got some of it back together for 1985’s ‘The Fury’ but then he got into that funk / rock thing! From what I can understand from reading his ‘Praying To The Aliens’ autobiography, he didn’t find himself musically again until 1994’s ‘Sacrifice’. Whilst I can’t say I’m a big fan of his new darker material, I still take an interest in his stuff and go to the classic album gigs. But the Andy Gray remix of ‘Prayer To The Unborn’ has to be the best thing he’s done in this heavier incarnation and it’s up there with his greatest songs.

‘Micromusic’ is released on DVD by Mortal