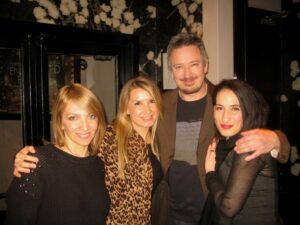 Following a successful series of worldwide screenings, RECOIL ‘A Strange Hour In Budapest’ had the first of its UK Cinema premieres at Everyman’s Screen On The Green in Islington.

Its comfortable surroundings provided the ideal setting for this lavish high definition film directed by Attila Herkó. Released earlier this year exclusively on Blu-Ray, in Alan Wilder’s words it was “to supply the most accurate experience of being at the concert”.

Intercut with picturesque views of the Danube city, live footage filmed at the venue and the special projections directed by Steve Fabian, Igor Dvorský & Dmitry Semenov,  ‘A Strange Hour In Budapest’ is a powerfully resonant audio/visual document that presents many highlights from Alan Wilder’s career in a concert setting.

In addition to bespoke computer generated graphics, there are illustrations ranging from monochromatic erotica, abstract space photography and austere footage of crashing aircraft. The latter are particularly poignant as they reflect Wilder’s own near death experience when an RAF Tornado jet crashed in front of him while he was on a driving holiday in Scotland back in 1994. Although those shocking memories are musically captured in the track ‘Black Box’ from 2000’s ‘Liquid’ album, that trauma is highlighted in the live presentation with the pulsing Shotgun rendition of ‘Prey’, the tension exasperated by its disturbing images.

Trippy grooves as on the haunting Siobhan Lynch vocalled ‘Drifting’ and the cosmic vibes of the Tangerine Dream sampling ‘Allelujah’ dominate the first part of the show but inevitably, it is the song based material such as ‘Faith Healer’ featuring Nitzer Ebb’s Douglas McCarthy and the reworkings of Depeche Mode that get the Szikra audience into a frenzy, particularly with the Aggro Mix of ‘Never Let Me Down Again’ and the late Johnny Dollar’s superbly powerful Jeep Rock take on ‘In Your Room’. 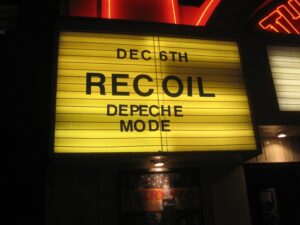 Incidentally, the sound reproduction throughout the film is outstanding and at times in the cinema, it was actually difficult to distinguish between the applause in the film and that of the audience watching!

Other highlights of ‘A Strange Hour In Budapest’ include the grainy projections of Wilder’s live partner Paul Kendall practicing robotics during a great cover of ‘Warm Leatherette’ and a superb mash-up of ‘Jezebel’, the Grungy Gonads Mix of ‘Walking In My Shoes’ and ‘Are Friends Electric?’.

Asked about it by ELECTRICITYCLUB.CO.UK during the post-film Q&A, Wilder replied:  “It was when we did the American leg of the tour, I wanted to make a few changes to the set to keep it more interesting having learnt from the first leg of the tour that there was a dip that needing picking up…so I came up with the idea of using ‘Walking in My Shoes’ . At the same time, we were going to play a gig with Gary Numan in Chicago so I thought it be fun to throw that track in and see if he noticed…and he didn’t!!” The cinema cracked up with laughter.

“He watched the set but he didn’t even notice his bit of music in it… ‘Cloth Ears’ I call him,” Wilder affectionately quipped. He added: “’Jezebel’ and ‘Walking In My Shoes’ just happened to fit tempo-wise, I had to change ‘Jezebel’ by a semitone to make it work with the ‘Walking…’ key signature but it worked well”.

Alan Wilder’s Q&A was an entertaining experience with him superbly articulating his thoughts and views. “No! I’m not going back to Depeche Mode!” he announced, setting the scene. On the subject of the loudness war, he was also forthright: “Just turn the volume knob up!” But on the future of RECOIL though, he was less specific: “All I know is I want to make some new music but whether it’s for an album, I’m just not sure because the concept of albums seems to be something people are losing interest in and they way people are listening to music is changing…I would like to work with film, a couple of people have approached me about that”. 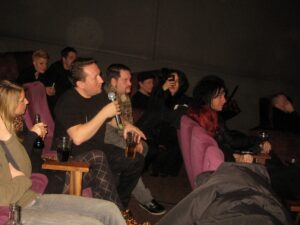 When Keith Trigwell from Depeche Mode tribute band SPEAK & SPELL mentioned how 2011’s auction sharing Wilder’s memorabilia connected with the fans, he candidly answered: “Shared?!?  I’d like to share my stuff with you…for this much!”

Wilder’s honesty is one of his many traits that have made him such a revered and respected figure in the music scene. However, some present seemed rather perturbed when Wilder gave answers that perhaps they didn’t want to hear.

On BECK’s new album campaign where fans have been recording their own backing tracks via sheet music provided online, he observantly commented: “It’s up it’s a*se isn’t it? How easy a life does he want?” However, he did concur that he is always open to exploring innovative ways for musicians to connect with their fanbase.

On the move away from hardware synths to software, he replied: “I’m not that nostalgic… we were struggling to get clicks to synch together and would spend three days on something that you can do in five minutes on a computer now…some of these plug-ins are amazing and stay in tune! Let’s not get over nostalgic about the past…but there are some great bits of vintage gear of course”.

On the studio process and how adversity can produce great music, he remembered ‘In Your Room’ as being “a tough track to record”, eventually being a combination of three different versions. By the opposite token though, ‘Enjoy The Silence’ “came together (like that) within a couple of hours”, the bassline achieved simply by playing around with a sequencer. 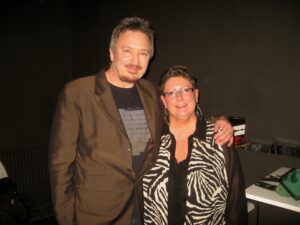 What was less enthralling during the evening however were some of the more inane lines of questioning by some attendees who seemed to be more interested in talking as much as possible while NOT actually listening to the replies of the evening’s humble host.

Wilder rightfully called it “random crap”. There is an etiquette to these things and sorry, “’Construction Time Again’, how exciting was that!” is NOT really a great question!

But despite this, there was a warm family atmosphere with Wilder being the consummate professional, answering questions intelligently and with humour throughout.

Figures from the DM fan community such as Deb Danahay and all four members of SPEAK & SPELL mingled alongside fans while Mr Wilder gave his time to everyone readily and happily. It was a memorable evening for all concerned and a fascinating selected event to boot…

ELECTRICITYCLUB.CO.UK gives its warmest thanks to Alan Wilder

‘A Strange Hour In Budapest’ is released on Blu-ray by Shunt Production in conjunction with Umatik Entertainment. Please see www.store.recoil.co.uk for full product details.