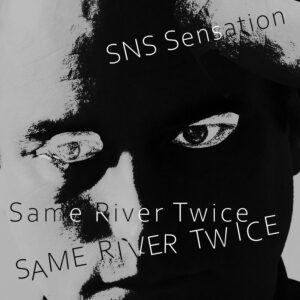 “Love not war, art not invasion, inspiration not fear” is the message of ‘Same River Twice’, the sixth single by SNS SENSATION, the ice cool minimal Italo-influenced project of Sebastian Muravchik who is best known as the charismatic front man of HEARTBREAK who have shared stages with THE PRESETS, LA ROUX, LITTLE BOOTS, ITALOCONNECTION and BLANCMANGE.

While rooted in synthpop and swathed in a monochromatic sepia, ‘Same River Twice’ takes a more baroque direction compared with previous SNS SENSATION releases, outlining how a relationship can embody the metaphysical questions of change and permanence.

Sebastian Muravchik chatted to ELECTRICITYCLUB.BO.UK about the more cerebral philosophical approach to the genesis of ‘Same River Twice’, both aurally and visually…

‘Same River Twice’ is a very on point phrase right now, but what had been your original intent with the song?

I can’t speak of intent, but I can say the process involved looking deeper into Parmenides (which is quoted in the lyrics), and looking a bit further into transcending the binary opposition between being and becoming (between Parmenides and Heraclitus, as it seems to be widely understood). I’m trying to work out the idea that everything is always changing and you cannot step into the same river twice (Heraclitus) and that at the same time there is no “twice” because time is an illusion and it’s all “being” (Parmenides).

The point that has been made before and I am building on is that we can look at the beauty of an idea and decide to take it on the basis of its beauty alone. So two beautiful ideas such as these two can be both true even if supposedly opposed. Beauty overrides exclusivist binarisms.

Of course looking into what beauty means is important here, and I suppose the best way to explain it is in relation to flow and freedom, which is not the same as excitement (neo fascists get excited about their ideas but these are not beautiful ideas; the excitement is the energy of trauma repressed in the subconscious and coming out as fresh repressive violence to try and control the repressive mandates that have oppressed the fascist himself as he was traumatised and then developed his sociopathy). Liberation is key here. That is, not the identification with the oppressor that imprisons so many people, but the awareness of our oppressor inside. When those repressive mandates are silenced, I believe the beauty available to you glows like nothing else in this life; but it is a long journey that many people choose not to undertake unfortunately. SNS SENSATION is all about that journey: music and art are as effective conduits to liberation and the ideal state of permanent flow as you’re going to get. 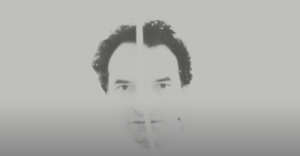 But as I was writing the song, a story of disappointment and alienation also filtered through. Time was already a key theme but now it was about time and distance, and how time destroys hope and connection between people (perhaps as much as it helps develop it, or that might be how it feels now, with the end of humanity looming on different fronts).

And yet in this story of increasing alienation and oblivion, I found a sense of infinity which I hear a lot in disco music but not as much in synthpop. That’s why the song fades out, because at that point in the song I believed it deserved to reach out to the infinite; this song did not need to end, it needed to merge into the silence of infinity (which incidentally befits both being and becoming).

I think this is one of my favourite songs of mine, it feels as if I’ve really found my fog. Infinite flow glows in this fog as it takes me with it wherever the wind may blow.

Was the video inspired by any particular artists or film directors?

I think late Beckett is usually important (‘Not I’ in particular, but also ‘Rockaby’). But also, interestingly, talented DJ and drone artist Xen Von Katz mentioned the music video for ERASURE’s ‘Blue Savannah’ – as a fellow ERASURE fan I was so pleased to discover that subconscious influence in this project.

The split face has a scary Impressionism, what the thinking behind this imagery?

I guess I have now reached the point where I get to see these images for what they are in themselves, their potential for meaning a mere aspect of their constitution – that is, seeing them as potential rather than as embodying a definitive intent. So in effect I know as much about the thinking of it as anyone else, and so the intent is multiplied.

Now that you ask, though, my interpretation of this might be that there has to be an element of that being-becoming dichotomy. But also, there’s an element of breaking, of breakdown, of crisis but also of liberation and multiplication somehow.

Like if you’re sad then you need to think about how you think about your sadness. Sadness in itself can be very beautiful, but it must be dealt with appropriately to avoid anxiety and panic. I wish this culture of ours focused less on money and power and fetiche, and more on the complexities of flow. In flow we can experience life as creation, and we are unburdened from notions of ownership. Like Moria Casán said “si queres llorar, llorá”. 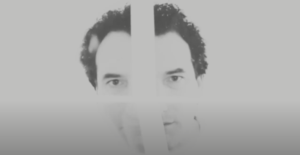 We have been aided, multiplied, write Deleuze and Guattari on transcending the binary. I guess I hope this music video works as the cracked mirror inside of us, burning, splintering and synthesised in the same way the infinite and oblivion join forces in the ether of music, the only version of the absolute idea that seems to work for me.

ELECTRICITYCLUB.CO.UK gives its warmest thanks to Sebastian Muravchik

‘Same River Twice’ is released as a download single direct from https://wearesns.bandcamp.com/track/same-river-twice