A hilarious animation satirising the Château d’Hérouville studio sessions for DAVID BOWIE’s legendary ‘Low’ album has been gaining traction on the internet.

Produced by The Brothers McLeod, the short film captures Bowie, Brian Eno and Tony Visconti recording the album’s lengthy doom laden instrumental ‘Warszawa’ using a witty script and authentic voice characterisations by comedian Adam Buxton, himself no stranger to sending up the music scene via ‘The Adam & Joe Show’.

At West Berlin’s Hansa Studios where the ‘Low’ sessions were being mixed in 1976, the guards in the watch towers in East Berlin could look into the windows of the building! Although named after the Polish capital, ‘Warszawa’ accurately captured the post-war tensions within the divided city without the need for overt lyricism. However, Buxton’s send-up reimagines what Bowie may have had in mind lyrically, insecure in the fact that Eno had totally composed and realised the track!

The animation also accurately highlights Tony Visconti’s often under appreciated role in co-producing ‘Low’ plus the subsequent ‘Berlin Trilogy’ albums ‘Heroes’ and ‘Lodger’; the frustrated New Yorker is seen to be ranting about “doing a lot of co-production, probably more than people think…”, a credit which has frequently been incorrectly attributed to Eno.

But what gives this animation the ultimate credible edge is Buxton’s spot-on Bowie impersonation and his affectionate references to fan trivia.

‘Warszawa’ is available on the album ‘Low’ via EMI Records 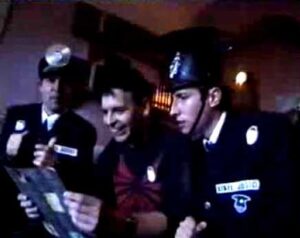 ‘The Adam and Joe Show’ was a Channel 4 comedy programme, written and presented by Adam Buxton and Joe Cornish which ran between 1996 and 2001.

Featuring a variety of school boy minded antics and sketches, most weeks would see Adam and Joe recreating a popular film or TV show using cuddly toys or ‘Star Wars’ action figures. But another regular feature was ‘Vinyl Justice’ where Buxton and Cornish would visit various rock stars’ homes to search for criminal records in their possession.

The skit involved illicit and embarrassing vinyl or CDs being uncovered, the owner being interrogated and then humiliated by being made to perform the song to the cameras as part of the forfeit. One particular week in 1997, Buxton and Cornish knocked on the door of Gary Numan. Among the records that Mr Numan is questioned about are releases by BELOUIS SOME and SIMPLE MINDS!

Among the rituals Numan is forced to undertake are trying to play ‘Cars’ on a portable keyboard and passing wind in-synch to the phrase “incontinent” to Thomas Dolby’s ‘Windpower’! However, on closer scrutiny, his record collection is not actually that shameful when compared with some of the other musicians featured in the series!

Other victims of the ‘Vinyl Justice’ squad have included Thomas Dolby himself, Cerys Matthews , Mark E Smith  and Neil Hannon 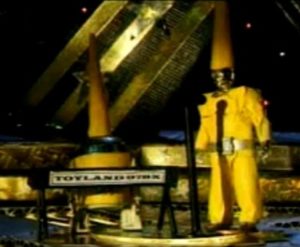