WE ARE REPLICA Miami

April 15, 2021 / electricityclub / Comments Off on WE ARE REPLICA Miami 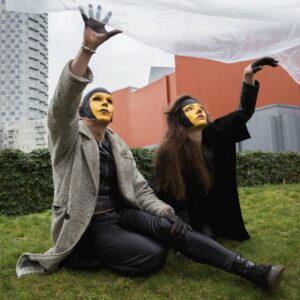 Arty dark synth duo WE ARE REPLICA are back with a new video for the song ‘Miami’, a highlight from their debut long player ‘Cleared Vision’.

“After the music was written and recorded I thought it sounded like Miami and improvised the first verse whereas the other verses came together the day after”, said Martin Kinz, the German half of WE ARE REPLICA about the song, “There is no particular meaning to the words. It’s all about matching sentences, that eventually become poetry. The chorus was written a bit later, and has more of a message, as in ‘every day’s a holiday’ is a state you can choose, that’s why we go on to ‘choose to go Miami’”.

“We wanted to show the apparent fake of a place like Miami, designing a set to create an atmosphere with plastic which represents the vibe of this kind of world” recalled Nadège Préaudat in her deep Gallic tones, “It could be found in many places but Miami sounded like a good example for this stereotype.”

“We wear masks and similar outfits to show the lack of individuality where everyone in society has to fit in. The real paradise that Miami is in many people’s minds is projected into a safe with a poison apple.” she clarified on the concept of the striking visual accompaniment, “Like the words of the song, the video is very abstract and we did not want to tell a story, so the viewer or listener can create their own meaning. The use of hands signifies the obstacles that we come across in day to day life. We finally face the truth by washing off the masks.”

Sharing the vocals, ‘Miami’ is musically a mix of post punk and pop with a rather suitable psychedelic influence. to confirm Kinz’s analysis that “our sense of reality is only in our heads”.

“The shoot was very DIY and the shots really came about quite organically. My take on the song is that it’s quite nonsensical in a way, but it’s like Miami becomes this fantasy place” director Tamsin Kavanagh remembered on the realisation of the video, “Thanks to Jorge’s amazing make up, and Ieva’s styling, Mart and Nadège became a bit like two aliens to me, that seem a bit out of place in the world, but then really come alive in the inner world, so the contrast between these two felt important.” 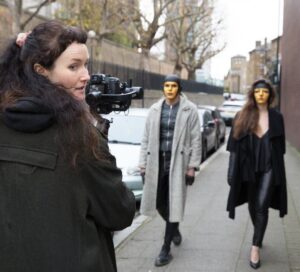 It proved to be an interesting experience technically for Cavanagh too: “All of the outside shots are quite smooth – shot with a stabiliser, and there is not a lot of movement. But then the inside shots (made possible by The Steamship PS allowing us to use their amazing space), that were shot in the basement, is where they really come alive, and I shot a lot of these with no stabiliser to accentuate that sense of dynamism and letting go. Similarly with the lighting – outside we made use of the natural lighting, which was quite stark compared with the colour gels I used inside- so it was a contrast between cold and warm, static and dynamic.”

‘Miami’ is from the album ‘Cleared Vision’, available as a download direct from https://wearereplica.bandcamp.com/album/cleared-vision