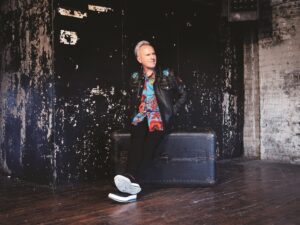 Celebrating the 35th anniversary of his debut album ‘Humans Lib’, synth veteran HOWARD JONES will be touring UK theatres in May.

which features the sparklingly catchy ‘Hero In Your Eyes’ and ‘Tin Man’, a distant musical relative to early B-side ‘Change The Man’ with its piano motif. Both songs reflect the long player’s distinctly classic synthpop feel with electronically derived rhythms and sequencers.

As well as driving numbers such as ‘Eagle Will Fly’ and ‘Take Us Higher’, the other songs on ‘Transform’ range from the chanty electro-funk of ‘Stay With Me’ to orchestrated ballads like the emotive musical thanksgiving of ‘Mother’.

ELECTRICITYCLUB.CO.UK was extremely pleased to be able to speak to HOWARD JONES during a break from rehearsals for the forthcoming ‘Transform’ tour.

Is there a spiritual theme or concept to ‘Transform’?

I’m coming from the point of view that if you want to make a change to society or the world, if you don’t agree with what’s going on, the first place you have to start is with ourselves, to transform ourselves rather than just go moaning about what’s going on *laughs*

The first place to start is home and then let it ripple out from there, so that’s one of the themes of the album, to change what I’ve got in my head and have a new take on the world, it’s up to me, that’s what I’m saying. 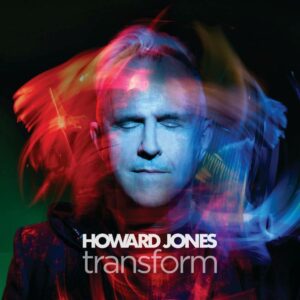 ‘Transform’ is your most synthy album for a number of years, so how did your approach compare with say ‘Engage’ or ‘Ordinary Heroes’?

‘Ordinary Heroes’ was very acoustic album using piano and a string quartet really, but ‘Engage’ was like a multi-media extravaganza with video and stuff that was conceived as a live show rather than just a studio album.

So ‘Transform’ is almost like going back to my roots in a way, back to the synths and back to the electronics, back to those song structures… I just felt like doing that! *laughs*

Did the root of it start with when you were invited to contribute music to the ‘Eddie The Eagle’ film?

Yes, but there were a couple of things… one was I working on the remastering of the first two albums so we were collecting rare mixes, demos and video. I was watching and hearing a lot of things from the early days and thinking “oh wow”, I really enjoyed those days of working as a one-man band, having loads of synths and drum machines around me.

And then Gary Barlow asked me to write a couple of songs for ‘Eddie The Eagle’ which of course is set in the 80s. He wanted to have an 80s sound but with contemporary songs. Those came quite quickly to me, I recorded them really fast and thought this could be the basis of the new album. So it was those two things I think that really pushed me towards the sound of the new album.

‘Eagle Will Fly’ is an interesting one in that it has a very driving American feel despite the synths?

It’s a shuffle and there are not many shuffles in synth, although ‘Everybody Wants To Rule The World’ by TEARS FOR FEARS is one… I read the script of the film and just based it on my feelings towards the ‘Eddie The Eagle’ story. I do what I do, I don’t really think how about how it’s going to fit in the world, I try and use the technology of the day to do my best work. 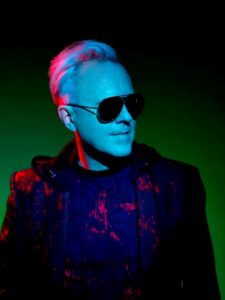 What was the idea behind ‘Hero In Your Eyes’ which was also from the ‘Eddie The Eagle’ sessions?

I was really drawn to the part where his parents were amazing, continuing to believe in him when he was obviously not really very good at what he’d chosen to do, they kept on supporting him.

So him being a hero in their eyes always, that “I’ll be there for you” feeling, I thought that it was something a lot of people could relate to, parents in particular.

The song stands on its own, it doesn’t have to be part of that story. It’s how you can feel about anybody close to you or that you really care about.

The video to ‘Hero In Your Eyes’ features your trusty Jupiter 8, Pro-One and Moog Prodigy, how much hardware did you use on ‘Transform’ and how did you balance in out with VSTs?

I use both, I get the old synths out when I really want to get a particular sound and I’ll record it live into a Mac. But I use software synths as well, I use the best things that are available to make a great sounds. I worked with BT on a few tracks and his studio is absolutely crammed with vintage analogue synths, so he used those a lot on the tracks we did together. When I went to the studio with him, I played a lot of those.

What do you think of these new old synths like the Pro-2, Prophet 12 and various Moogs?

I’ve got a Prophet 12 and I think it’s great, it’s a wonderful synth. But definitely on my shopping list is the Moog One which I really want! It’s a must have for any synth nut, I still have keyboard lust! *laughs*

Among the tracks you worked with BT on are ‘The One To Love You’ and ‘At The Speed Of Love’, how did this come about and what did he bring to the party?

My long term collaborator Robbie Bronnimann turned me onto BT’s music and I became a huge fan of his work. I really thought this guy was really taking electronic music forward with programming and coding, I just loved what he did. 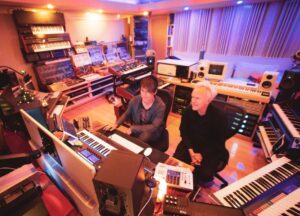 I went to see him in Miami where he was mixing orchestras and electronics, he unexpectedly gave me a namecheck from the stage which was a bit embarrassing! I met him afterwards and he invited me to his studio to hang out and chat. We started messing around with some modulars which was amazing fun and I suggested that we should make a record together because we had come from the same sort of place.

Because I was such a big fan of his work and he been listening to my early work since he was 13, it was a perfect combination really. I think that’s why those tracks have turned out really well. I hardly ever collaborate with people, it’s just with Robbie who I’ve worked with for nearly 20 years. So really, it’s quite a big deal for me to collaborate with people.

Did you two talk about your pop group diversions, him with NSYNC and you with SUGABABES?

No, we didn’t actually! He’s worked with all kinds of different people, unlike me! *laughs*

‘Beating Mr Neg’ has an important message. Now you have been known over the decades as Mr Positive, what’s your secret?

I think everyone has huge capacity for being negative and cynical about the world and themselves, I think that’s what makes us human. We have this great potential for positivity but also this nagging negative urge that often stops us from doing brilliant things.

But it’s a very serious subject, so I wanted to have some fun with that idea, and give Mr Neg a character… of course at the end, you temporarily defeat Mr Neg and are positive about the future.I’m looking forward to playing it live because Mr Neg is represented on the video screen, all nasty and cynical and whispering things in your ear that you don’t want to hear. I’ve had a lot of reaction to the lyrics of that one which is great, people have got where I was coming from.

The ‘Tin Man’ is a AI entity who wishes he could be human, feel pain and joy, and dance the bossa nova. It’s quite a sad song really because he wants to hear the nightingale singing and ponder the universe, but he just can’t because he’s not human. It’s me exploring the idea of Artificial Intelligence and how far that needs to go, will it ever be like the way we think?

What format will the forthcoming ‘Transform’ shows take?

It’s the biggest production I’ve done maybe ever for a theatre tour in the UK. Because the album is very electronic, it’s going to be three keyboard players including me and loads of synths. It’s unashamedly electronic, the drums and bass are coming out of Ableton and we play our stuff on the top, it’s the only way electronic music can sound right. Occasionally I will go to the piano and will play a song acoustically with my guitarist Robin Boult.

It’s very exciting. There will be eight of the songs from the new album, interspersed with heritage stuff. We’ve worked on the older tracks to facelift and update the sounds, get the timing better and have a bit more of the flavour of the new album. So when we play songs back-to-back, it will feel like a continuum rather than jumping back and forth in time. I’m not into nostalgia, I’m always looking forward and how you can create something new, giving older stuff new life. 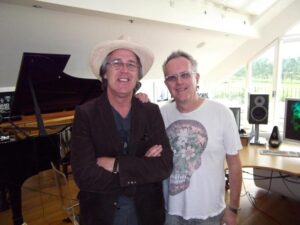 When you first got your break, you supported CHINA CRISIS in 1983 and you’ve invited them to open for you on the ‘Transform’ tour, it’s great that you’re still friends after the extremely positive reception you got back then…

It’s kind of payback isn’t it really, that tour was so important for me. It was my first national tour and it kind of broke me.

I’d got to the right audience and they went out and bought the ‘New Song’ single, it just was brilliant. I’ve always been friends with CHINA CRISIS ever since then, so it’s really lovely to have them on the tour with me.

The best thing about it is that you’re both still around and making good music… so how does it feel to be celebrating the 35th anniversary of your debut album ‘Human’s Lib’?

It’s a good question, I mean I’m as passionate about the work as I’ve ever been and I’m surprised at that! But it is an absolute fact, I am obsessed with making the best music I possibly can for the fans and I love putting on a show.

It’s what I do and I’m sort fortunate that I’ve found out what it is that I can contribute to our world. It makes me very happy whilst driving me completely nuts as well.

Trying to get things to sound the way I want them to sound, it seems like forever to do it. But it’s really worth it when you get out there and people hear the music and they enjoy it. That’s the pleasure of doing it.

ELECTRICITYCLUB.CO.UK gives its warmest thanks to HOWARD JONES

is released on 10th May 2019 by Dtox Records as a deluxe 2CD with media book, standard CD, vinyl LP and download, pre-order from https://www.musicglue.com/howard-jones/ 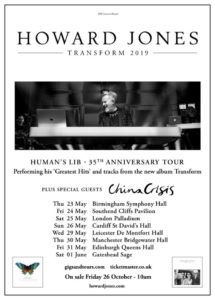 Text and Interview by Chi Ming Lai
6th May 2019