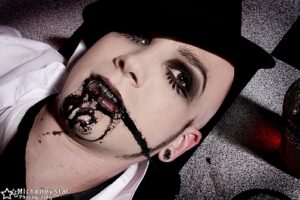 The underground EBM / Industrial scene has for years been one which is seemingly bound by strict conventions,

In an “adapt or die” move, AESTHETIC PERFECTION aka Daniel Graves has gradually evolved the act’s sound away from an initial dark and punishing industrial template with screamed vocals with ‘Close To Human’ and ‘A Violent Emotion’, through to 2011’s ‘All Beauty Destroyed’ which introduced more sung vocals and at the same time covering a multitude of styles from the electropop of ‘Inhuman’ through to a dark / downtempo title track.

2014 has seen the release of ‘Til Death’, an album which has taken the act even further away from its roots and closer in sound to the one-off side project NECESSARY RESPONSE which Graves used as a way of releasing songs which didn’t fit the original AESTHETIC PERFECTION framework.

ELECTRICITYCLUB.CO.UK caught up with Daniel Graves on the tail end of their European tour to talk about his new album and the challenges associated with being a one-man ‘band’.

You are currently well into your tour with FADERHEAD, can you give us a snapshot of life on the road with AESTHETIC PERFECTION?

On stage you are the antithesis of a lot of electronic acts in that you don’t hide meekly behind laptops pushing buttons. What is your view on those type of bands?

In my view, as long as you’re honest about what you do and who you are, then any kind of show or performance is acceptable. If your show is karaoke, no problem, you’re like 99% of touring rap artists. Have someone DJ your backing tracks while you sing. I’ve seen a lot of good, energetic shows that were just like that. To me, it starts to become silly when you have people onstage pretending to play instruments. What’s the point? It doesn’t add to the show. All it does is breed egocentrism in the ‘musicians’. I’ve done it, I’ve seen it, and I think it’s shameful. Don’t lie to yourself or your audience. Just be honest. 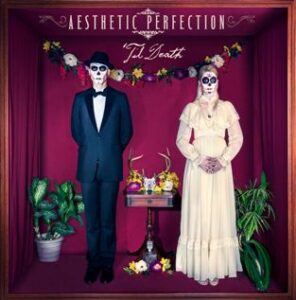 Once you are back in the studio, what are the best and worst things about being a solo / self-contained project?

On one hand, I have 100% control over the final product. There are no artistic disagreements. There are no artistic compromises. But the flipside is I don’t have another person there to bounce ideas off of. There isn’t another musician there to help along in the process or lend their expertise. In a band, each member has their strengths and weaknesses. A great band is greater than the sum of its parts. I don’t have that. The workload is enormous. But it’s also enormously rewarding. I think my personality won’t allow me to work any other way.

How much of an effect did being an only child have on your upbringing and later musical pathway(s)?

It was probably the defining factor in what made me become a solo musician. I don’t like sharing. I need all the attention. I need all the glory. I need all the applause. It’s a weakness and I know it. I figure if I can at least recognize that, and try and exist in spite of my psychological limitations that I can have some measure of success in overcoming them. It’s a daily battle!

How influential would you say UK electronic music has been on AESTHETIC PERFECTION?

When people talk about electronic music from the UK it conjures up a lot of images of raves and parties and scenes that I simply never connected with… dub, garage, drum ‘n’ bass, that stuff doesn’t speak to me. ORBITAL’s ‘In Sides’ album was really important to me as a teenager, but that was more of an exception than a rule. When it comes to rock music, though, the UK has definitely won my heart. LED ZEPPELIN and QUEEN are some of my all time favorite bands. And of course, most of those new wave hits were made by English bands. THAT’s the music that speaks to me.

I’m a firm believer in that some of the best music is created with limited resources, do you subscribe to that viewpoint?

Absolutely. Limits are the driving force behind innovation. When you’ve got every resource imaginable at your fingertips, you’re bound to end up creatively empty. I used to pirate every single new soft synth that came out, had every plug-in imaginable and my artistic output was like molasses. I realized I didn’t even fully understand what I was working with. Once I had that epiphany I decided to select my tools carefully; to learn each one inside and out. I started purchasing all of my software. Not because it was ethical, but because I knew that if I was going to spend my hard earned money on something, I’d better be damn well sure I want and need it. As the years have worn on my ‘studio’ has become less complex, not more.

With ‘Til Death’, did you ever hit a point when you were making it where you wavered and thought that you couldn’t follow through with such a change in sound/direction?

Constantly. I’m not a confident man. My persona is confident because that’s the way I’d like to be, but in reality I suffer from crippling self-doubt. Of course I’ve thought “maybe I should just make ‘A Violent Emotion Part II’ like everyone wants”. Thing is, I knew that path wouldn’t lead to long-term success or artistic satisfaction. Nothing I do will ever satisfy everyone, and it’s that knowledge that forces me to stay true to the path I’m on. At the end of the day if I’m going to do something, I need to go all in. Sometimes you have to just close your eyes, take a deep breath and step off the ledge.

I use software and controllers. Synthesizers and guitars. It’s all the same when you break it down, right? There is no magic tool to make your music good or bad. The magic comes through perseverance and a dedication to your craft. No song is ever written the same way. It may start as a drum beat, a bass line or a melody in your head. Whatever makes your ears perk up and go “wait a minute…”

If the opportunity ever arose to write songs for more mainstream / commercial major label artists (even with a pseudonym) would you take that opportunity?

Why have a pseudonym? In this business, your name is all you’ve got. When do I start?

I was honoured to win the ‘All Beauty Destroyed’ remix competition with the EMP 80834 mix, in what was an unusual move you made some sheet music available for the original track, how did that come about?

That was a great remix, thank you! I get a kick out of offering fans remix kits and sheet music and anything that could possibly inspire them. When I was a kid I was inspired to write my own music after learning how to play the music of others. It’d be nice to pay it forward, so to say…

You have covered FINE YOUNG CANNIBALS ‘She Drives Me Crazy’, was this a calculated move to wind up uptight Industrial / EBM fans?

It’s calculated chaos. There’s a vague notion of a master plan but in the end it’s all just madness. It was absolutely made with a grin on my face, but I think we’ve reached a point where our fans know to expect the unexpected and that guys with crew cuts and cammo pants know what we’re doing isn’t really their cup of tea.

With the lyric “Well give me just one more drink…. to tolerate this tired scene”, and the recent COMBICHRIST collaboration ‘FVCK INDVSTRIAL’, are you not biting the hand that feeds?

For one, I like to inject a bit of humor into what I do because, in all seriousness, life is boring if you can’t laugh at yourself. And second, I don’t think people actually realize how important the dark music scene is to me. It gave me a home when I was a lost teenager, it gave me support as an artist and brought me to where I am today. I am humbled and indebted to our scene. With that said, it’s still a scene, and just like in every scene (metal, techno, punk etc…) people can be elitist pricks. Relax. Have a drink. Recognize that there is a whole world of things to enjoy outside your little box.

I thought the underground was supposed to be open and accepting; a safe haven for the disenfranchised. Why is it that the underground is more judgemental than the mainstream it derides? You think RIHANNA fans care if she makes a dance track, then a hip hop track, then a ballad? No, they just like it because they like it. How is conforming to the expectations of an underground scene any less conformist? I see ZERO distinction between dressing up in hip hop clothes or wearing Cyberdog. It’s all a costume. 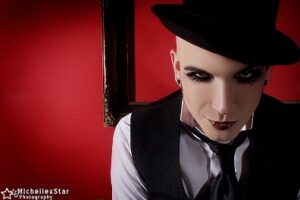 When ‘Fight Club’ came out on DVD, the sleeve had the negative reviews printed all over it. I found that exciting and I promised myself if I ever had the opportunity, I would magnify my negative press as much as my positive press. Humans crave conflict. I’m just giving them what they want.

What does the future hold for AESTHETIC PERFECTION and have you started conceiving the next album yet?

I think I’m finished with albums for a while. People’s attention spans have been destroyed by the instant gratification world of the internet. Twitter. 144 characters or less. More to say? Can’t be bothered. 3 years waiting for an album? Forgot about you. Techno guys know what’s up. Singles and EPs. Stay relevant. Stay in the public eye. It’s a shame, but I’m just here to give you what you want. Right?

ELECTRICITYCLUB.CO.UK gives its sincerest thanks to Daniel Graves

is released by Metropolis Records