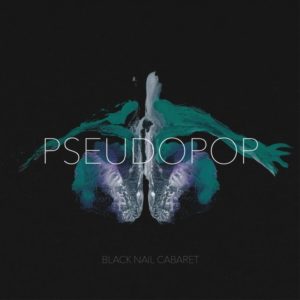 Looks like this year witnessed some great releases in the electronic circus, but often the best ones are left to last, and ‘Pseudopop’ may as well be that cherry on the cake of 2018.

Coming from an act that have been climbing the levels of dark synth scene for the last few years, with BLACK NAIL CABARET honing their unique soundscapes, the new album seems to twist things a bit again in the Hungarians’ camp. Having started with a surprisingly punchy version of Rihanna’s ‘Umbrella’, BNC have since established themselves as the destroyer of everything dainty and soft.

Sat on the dark side of electronica’s moon, Emese Illes-Arvai and her husband pushed their last long player, ‘Dichromat’ over the finish line and continuing to feed the dark poison to the fans of the grittier, dirtier side of synth.

was superb, but if that wasn’t enough, Emese and Krisztian went for the throat earlier this annum with a three song EP ‘Bête Noire’

. The title song also appears on the new album; a clever move from the twosome, as the punchy single certainly gives it some. Mrs Arvai, says it as it is with the delightful “I think I wanna kill you, but I believe in peace, bitch!”, which pretty much sums up the concept of the track.

Punchiness aside, the album starts off with minimalistic and quite melodious ‘Icarus’, which represents synth poetry at its best. The ‘Icarus’ flies over the tediousness of life with hope, which materialises in the simplistic use of synth and gentle piano.

The different approach continues on ‘Rhythm X’, showing off a more artistic side to the usual schwarzness of BLACK NAIL CABARET, stepping on the toes of GAZELLE TWIN, at times introducing Eastern influences and the more polished EBM than what BNC’s listeners might be used to. The whole thing is far more pop friendly than the band’s legacy so far. Is this the ‘Pseudopop’

‘La Petite Mort’ steps wearily over the gyrating beats, as if introducing colours into the signature black and white monotony. What brings one down to reality is the machine-operated ‘Trigger-Happy’ with the mundanity of factory work, the choices are clear “homicide” or “suicide”. Continue at your own risk.

‘90s’ and its Elvis in Hawaii-inspired bossa nova sits nowhere near the standard BNC supplies, which comes in as a pleasant surprise, if not a total shock and is either going to turn off the fans of stompy beats, or make the listener measure the pair with a new found respect. 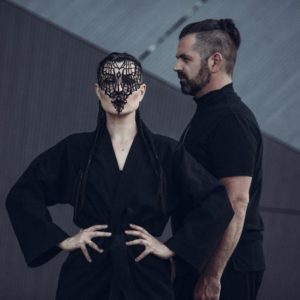 The normality resumes with ‘Verge On The Creepy’. Back to the heavy beats, industrial samples of marching qualities, Emese goes for waxing lyrical alien-pop style. Greatly invigorated, the tempo slows down somewhat onto ‘Technicolour’, representing a gentler approach where Emese paints the picture with water based colours of the more demure type. The vintage synth connotations make themselves visible on ‘Unrequited Love’. A Bjork-esque approach to more concise electronica and a haunting vocal performance hover over the graduating steps into the quintessential sound of BLACK NAIL CABARET on the closing ‘Resonance’.

Having left the best to last, the twosome present the bomb right at the end. Could this just be a very modern approach to love? To pop? To musicality?

Having achieved so much over the last few years, with their growing fan base, gnawing sense of urgency to provide an alternative electronica source and alien-like synthpop, BLACK NAIL CABARET go twisting the boundaries and breaking the rules on ‘Pseudopop’.

Yes it’s pop, it’s their own pop; something BNC never did before… or are we coming back 360 degrees to their ‘Umbrella’? Either way, the year-end sounds better than ever!

is released by Dichronaut Records and available as a CD or download direct from https://dichronaut.bandcamp.com/album/pseudopop