April 29, 2018 / electricityclub / Comments Off on BRIAN ENO Music For Installations 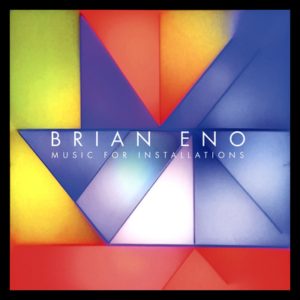 is a multi-album collection of new, rare and previously unreleased tracks from BRIAN ENO, recorded since 1986 for use in his art installations experimenting with light and video which have taken place all over the world including Russia, China and Australia.

It was an concept that was first realised on ‘Thursday Afternoon’

in 1984, an 82 minute audio / visual presentation comprising of video paintings of actress Christine Alicino which were filmed in a vertical format, so that they had to be viewed using a television turned onto its side.

In a strange way, Eno foresaw the advent of smart phone videos which are now presented online in this fashion, rather than in the more traditional landscape format.

Spread out over 6 CDs or 9 vinyl albums if you prefer the lengthy mood (which is essential in effective ambient music) to be broken by having to flip the record, the various works gathered on ‘Music For Installations’ are for the most part equal to Eno’s best ambient opuses like ‘Discreet Music’

On CD1, ‘Kazakhstan’ recalls the serene beauty of ‘Reflection’, but there are more synthesizer sweeps than most might be used to with Eno. ‘The Ritan Bells’ does as it says on the tin with beautiful ringing reverbed tones reminiscent of ‘Neroli’ but using sharper accents. ‘Five Light Paintings’ is darker and more sombre with a nautical aura like Jarre’s ‘Waiting For Cousteau’ or Eno’s own ‘Dunwich Beach, Autumn, 1960’ but extended over 20 minutes. Concluding CD1 with ‘Flower Bells’, this develops on ‘The Ritan Bells’ but with more sustain and acoustic sounding textures. 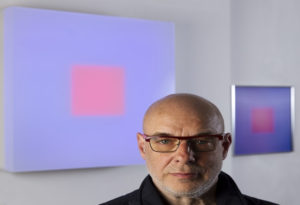 ‘77 Million Paintings’ (which takes up the whole of CD2) will be familiar to Enoists as ‘Ikebukuro’ from 1992’s ‘The Shutov Assembly’, but tripled in length with manipulated distortion and robot larynx added. CD3’s two offerings are on the more placid side; ‘Atmospheric Lightness’ has much less happening than the other pieces of ‘Music For Installations’ with it being much more minimal and impressionistic, while its sister ‘Chamber Lightness’ drifts along like a sound painting.

The surprise comes with CD5 which is fragmented like ‘Music For Films’. With a rhythmic base, the opening track ‘Needle Click’ is quietly tribal and by modern Eno standards, comparatively uptempo with a gorgeous synth melody making it almost like VANGELIS.

Indeed, this collection of shorter pieces is lively, with the arpeggio laden ‘Light Legs’ being more akin to soundtracks like ‘Stranger Things’. Meanwhile piano and guitar make their presence felt respectively on ‘Flora and Fauna / Gleise 581d’ and ‘New Moons’. ’Hopeful Timean Intersect’ even features acoustic six string within the pensive tension, while there’s some unexpected choral assisted drama in ‘Delightful Universe’. 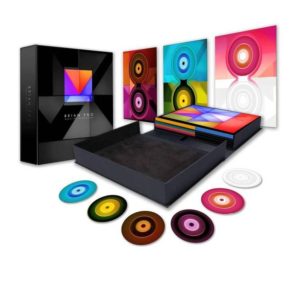 CD6 offers up the unsurprisingly spacey ‘Unnoticed Planet’ while both ‘Liquidambar’ and ‘Sour Evening’ are starkly minimal, although the latter brings some shimmering qualities to the wavetable. Bringing proceedings to a close, the sub-18 minute ‘Surbahar Sleeping Music’ is almost atonal and unsettling in places.

For most people, this lavish boxed set is probably too much Eno, but then it is not aimed at them. However, for his many admirers and fans, ‘Music For Installations’ will be loved, cherished and smelt as a highly essential collector’s item.