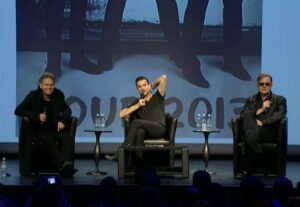 When DEPECHE MODE announced at a much hyped press conference in Paris that they were to release a new album and tour in 2013, many fans watching the live stream were feeling they were missing something… in fact, they were! Neither the name of the album, tour or even the song that was previewed were announced although Mode enthusiasts have since uncovered that the track’s working title is ‘Angel’.

However, the album and tour titles still remain elusive! Meanwhile, the tour dates had already been leaked the night before so the effect of the press conference was strangely muted.

In Germany, tickets had already gone on sale during the press conference itself!! This rather bizarre episode sent DEPECHE MODE fans into overdrive with one disillusioned but loyal fan making their views plain… please note, this video will probably be meaningless if your first language is German!

Using a key bunker scene from the acclaimed film ‘Downfall’, Sean S and Amanda C of the DM blog ‘And Then’ have created this brilliant, highly amusing skit to send up the whole shambolic state of affairs with the press conference and the perceivably exploitative nature of the music business.

Indeed, when the former Herr Schicklgruber snarls: “They don’t know we’ll even like the album…”, it accurately highlights the ridiculous situation of how fans are expected to buy tickets for a tour nearly a year in advance while the accompanying album is not likely to surface until a few days before its start! Thus, it very much captures the mixed emotions of what it is to be a one of the Devoted.

The video soon viralled across the DEPECHE MODE fan community with one prominent figure remarking: “absolute work of genius. EXTREMELY funny and SPOT ON…”! The ‘Downfall’ clip has been used for a variety of music satires featuring acts as varied as KRAFTWERK and GIRLS ALOUD, but this latest DM one is by the far the best.

Posted in Carry On Synthpop Tagged with Depeche Mode