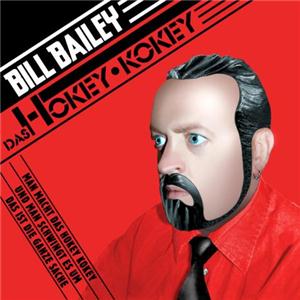 The targets of his skits have included prog rock, rave, Billy Bragg, Gary Numan, U2 and Chris De Burgh who he famously referred to as “the axis of evil”. In 2011, he headlined the Saturn stage at Sonosphere. His album ‘In Metal’ featured a cover of ‘Scarborough Fair’ in the style of RAMMSTEIN! As well as his stand-up and send-up routines, Bailey is also a well known TV personality appearing in shows such as ‘Never Mind The Buzzcocks’, ‘Have I Got News for You’ and ‘QI’ as well as sitcom ‘Black Books’.

During his ‘Part Troll’ tour in 2004, he turned his attentions to German innovators KRAFTWERK for some kestral manoeuvres in the dark. Suitably attired and looking not unlike “a Klingon motivational speaker”, the electronic ditty was introduced as one of the Düsseldorf foursome’s “lesser known tracks”! The number is frighteningly realistic, complete with robotic deadpan vocals and ironically even sounds like a real CAMOUFLAGE B-side called ‘Klingklang’. Sung entirely in German, the Teutonic rant is not quite the technological themed tone poem it first appears to be though…“Ja! Das Hokey Kokey!”

For those from non-English speaking nations who are not aware, The Hokey Cokey (or Hokey Pokey as it is known in North America and Australia) is a participation dance with a distinctive if irritating accompanying song. It is often an embarrassing staple at family parties and involves the movement of limbs in a synchronised fashion! Appropriated by Bailey in his surreal manner, the practice is reconstructed to amusing effect. 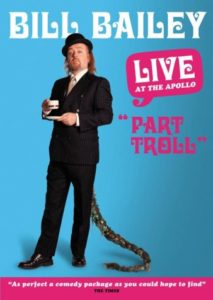 Recorded at Hammersmith Apollo, Bailey’s tribute was part of a spoof band called AUGENBLICK who also featured Kevin Eldon, John Moloney and Martin Trenaman. The latter was also a member of a punk band BEERGUT 100 with Bailey. After the final gig of the ‘Part Troll’ tour on 1st January 2005, AUGENBLIK reappeared on stage to perform a selection of Bailey’s favourite rock songs!

‘Das Hokey Kokey’ was released as a CD single in 2006 and is now a highly sought after collectors item. So all together now: “Man streckt den linken Arm ein, den linken Arm aus…”

is available on DVD via Universal Pictures UK

Posted in Carry On Synthpop Tagged with Kraftwerk