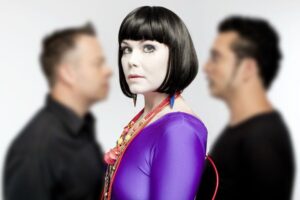 After a year’s delay, it is finally here – the comeback album of Swedish trio DAYBEHAVIOR, ‘Follow That Car!’.

The trio have not been exactly prolific even by today’s standards; their first long player ‘:Adored’ came out in 1996 while there were delays for its follow-up ‘Have You Ever Touched A Dream?’ which was finally released in 2003.

However after nearly 9 years, Paulinda Crescentini, Carl Hammar and Tommy Arell have made a full return. The three singles released last year were all very promising, but how did the rest of the record turn out? The answer is: simply brilliant. This is grown-up synthpop, with tons of atmosphere, incredibly stylish, yet sometimes a bit rough with arrangements that fit remarkably well with Paulinda Crecentini’s stunningly beautiful vocals.

Despite the intricate soundscapes, the overall sound is still both restrained and effective. Calm and faster songs succeed each other and even if the variation in sounds and rhythms is vast between the different songs, there is still a cohesive auditory theme through the album. All twelve songs are of high class and overall, this is certainly one of this year’s best albums – well produced, varied and beautiful top of the line music.

Can you tell me about the band’s background for your new fans?

Carl: It started with me and third member, Tommy Arell. Each time we met, we only talked about synths and synth music. We also had a strong common interest in the early 80s synthpop. We were both a little sick of what we were doing at that point so we decided that we should do something together instead. We started to create a prototype of something and in our mind this was not something synthpop really. It was more like another type of music from the early 90s. But when we started sending out stuff to record companies, we soon became aware that it was still synthpop! *laughs*

It could not be avoided – it was always there in our subconscious, the kind of melodies and sounds we liked to use. Then we got hold of Paulinda, we were looking quite a while before we found her. Before that, we were a bit on the wrong track. But then when we heard Paulinda’s voice and felt that this was the piece that was missing from the music, her beautiful, beautiful, soft voice to the rather heavy music with lots of bass and a lot of beats.

Where did the name come from?

One of our early songs was called ‘Daybehavior’. In the song, we have stolen a little thing BJÖRK did in ‘Human Behavior’; the chorus just goes up a semitone in one turn and then it goes down again. It’s a pretty weird chorus – quite unusual. Then there was something on MASSIVE ATTACK’s ‘Daydreaming’ which also inspired us so it was like: ‘Daybehavior’ – ‘Human Behavior’ – ‘Daydreaming’. But then we did an interview with the Swedish journalist Linda Skugge in ‘Expressen’ (a well known Swedish tabloid newspaper) before we were really a band…we were kind of forced to come up with a band name … “Let’s say we are called DAYBEHAVIOR – for now anyway” …

Carl: Then we realized it was a bit too late to change it… 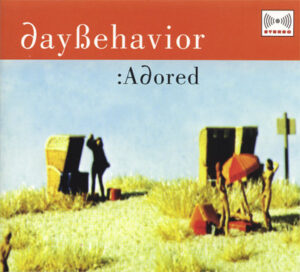 Had you been singing in any band before you joined this band?

Paulinda: Sort of, I had always wanted to sing. I actually did my own songs on a small synthesizer when I was about eight years old. I had been nagging and nagging at my parents to get me a synth for Christmas and finally I got one. I actually wrote English lyrics then as well, which I barely understood myself… I used the dictionary where I found words and sentences I liked, “that sounds good” *laughs*

Unfortunately, I deleted all that stuff, because I was ashamed of it when I became a teenager. “God, how embarrassing – let’s throw this stuff away”. It would have been a blast to have that material now! I did about ten songs with that little synth that I had plugged into a tape recorder. It was great! *laughs*.

But I always wanted to sing in a band. In those days there was no internet, so I bought the Yellow Pages and there was a small ad: “seeking vocalist, influenced by…” and it was a little list of different influences. I remember that it was BJÖRK, MASSIVE ATTACK and maybe something a little more synthpop-esque. So I thought: “Oh, what the heck – I’ll go to that audition!” I was really nervous and I was awful! But I got given a little tape of songs and then we met a week later … I had sung some lyrics on it and then I was in!

What made you reunite? 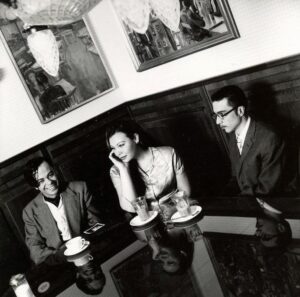 Paulinda: It started with Tommy who had moved to Thailand by then. He began to email and it was very nostalgic; “My God, wasn’t it nice it was back then … shouldn’t we try to do some songs together again?” We had gone our separate ways, but when he wrote about things like that, you felt that; “God – yeah, it would be quite nice to do it again”. It also just happened that he would be moving back to Sweden for a period so we thought “great – we’ll do some songs”. So we started up DAYBEHAVIOR again.

Is there any long-term plan with this or is it just for one album and seeing what happens?

Paulinda: Nah, we want to make yet another album – absolutely. We feel that we want to continue with this. It has gone really well. We’ve had our internal battles, I can’t deny that and it’s a bit hard to work when Tommy is living sometimes here in Sweden and sometimes in Thailand. It has been a bit difficult logistically to get it all together, but it worked out fine in the end anyway .

The difference in the music business must be pretty big now compared to when you made your last album ‘Have You Ever Touched A Dream?’?

What are the advantages and disadvantages?

Paulinda: The first question you get from people when you say you make music is: are you on Spotify? Spotify is big and will only get bigger.

Hopefully they will change the deal so that you get a little more money for it, but I do not think they will do that. So it’s a downside, the economy – there is no money in music anymore. You make music because it’s fun and hopefully don’t lose any money at least. The advantage is that the internet makes it easier to spread the music and have fans all over the world, which you may not have had otherwise …

Carl: Because it is easier to spread music, there is also the increase in competition. It is not as exclusive to receive an email with a song or some links to get a physical record in a package. So that is one drawback – anyone can do quite a large mass mailing.

In other words, there’s a risk of drowning in a large variety of garbage then?

Carl: Yeah … or maybe you are garbage yourself? *laughs*

No, but it is quite true. It’s not only good music that is so easy to distribute over the internet and what you said is a good point … then of course, you have the illegal download spread of course and very low paid listening services such as Spotify, LastFM and similar streams. It’s very good for users but for musicians, it’s not. 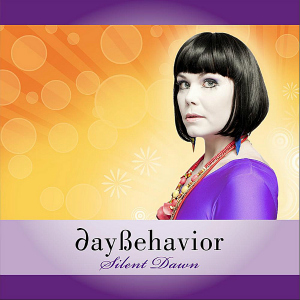 What have the reactions to the new songs been like?

Carl: Yeah, especially internationally. I do not even know if we had any feedback in Sweden …yes, we have!

But Sweden is small. It feels good that we have an international market and that we can reach really far. It’s great to get feedback from Argentina, Brazil, Italy, Japan etc. It’s sometimes odd places that you did not expect … it’s like you do not have a clue: how did they found out about it? But there is always a unique group of people who are true music lovers and they find things. Through them, you often get help to distribute it further too via their connections.

There is a lot of melancholy in your music – but of course beautiful melancholy … why is that?

Paulinda: Good question! All three of us are probably pretty nostalgic and like this melancholic feeling …

Carl: Yeah … and there is a lot of influence from movie scores as well. Both me and Tommy like film music and to make things atmospheric. People often say that our music feels like a movie and they see pictures in front of them while listening. It may have to do with the melancholy and harmonies you work with and the sound as well.

But even in the lyrics, for example  ‘Silent Dawn’…

Paulinda: Yes, I write pretty much sad lyrics – it’s almost as if there are only two modes – either/or. You often end up in that melancholy vibe when writing. It’s the emotions which are strongest – sadness or things you long for – it touches you. And then when Carl and Tommy send over a basic song sketch for me, then the feel of it influences the lyrics.

So you make music before lyrics, then?

Paulinda: No. It works fine like this. We are happy with it. Then I usually send over a sketch back to get feedback and then we send it back and forth. When we feel we have a good lyric, we usually start working on the sound.

What are your inspirations?

Paulinda: It can be anything. Tommy wrote a while back, “Oh my God, I just saw the movie ‘The Orphanage’ and sat there weeping to the theme song”…

Carl: …is that Morricone?

Paulinda: Yes, Tommy said: “I could not let go of the feeling from the movie, so I sat at the computer” and then he made a basic sketch of a song that he sent over. It was really beautiful! It had a lot of ENNIO MORRICONE … bombastic … it will definitely be on the next album, I think! But otherwise, it is often both new and old music that inspires. 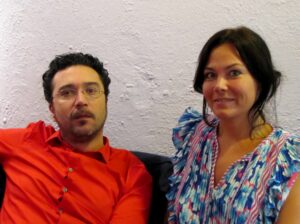 And there are all sorts of genres…

Carl: I just listen to one genre! Do you listen to something else?

Paulinda: No, that’s what I don’t do … I mostly listen to new music.

What about software versus hardware? Do you work mostly with the computer or do you use real instruments as well?

Carl: Shall we admit it? We are also lazy actually, unfortunately. We sometimes use recorded sounds from real analogue synthesizers. But it is so much easier and quicker to work with digital, so it’s of course what you do.

Are there plans for live gigs?

Paulinda: No, unfortunately. It seems unlikely. There is no time to practise.

ELECTRICITYCLUB.CO.UK gives is sincerest thanks to DAYBEHAVIOR

This interview was originally published in Swedish at http://www.synth.nu