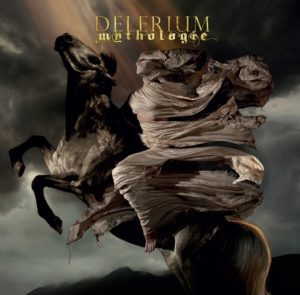 DELERIUM originated in Canada as a side enterprise of FRONT LINE ASSEMBLY, with Bill Leeb as the only constant member.

Since, the venture has had an established career spanning over twenty nine years.

The strategic idea to use various vocalists on their projects, such as Jacqui Hunt of SINGLE GUN THEORY, Niels van Gogh, Sarah McLachlan, Kirsty Thirsk, Lisa Gerrard, Emily Haines of METRIC, Matthew Sweet or MEDIÆVAL BÆBES, has proven financially beneficial to the outings by DELERIUM. In fact, surpassing even FRONT LINE ASSEMBLY, who have always been known for having a cult following.

is the fifteenth studio album by the Leeb-Fulber collaboration, with a helping hand from Jared Singerland and Craig Johnsen. It’s also DELERIUM’s first album released under the umbrella of Metropolis Records. 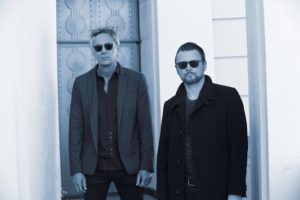 Mimi Page guests on the opening ‘Blue Fires’; Page is an established LA based composer, vocalist and songwriter, mostly celebrated by her ethereal, cinematic vocal techniques and celestial soprano voice.

‘Blue Fires’ is very much a Page track; with atmospheric philosophy and dreamy sequences, it is a perfect opening to the opus.

‘Angels’ is the second out of four songs with Mimi Page in charge. Another JULEE CRUISE styled vocal, hauntingly beautiful, hovering over the extravaganza of synth, guitar and piano. ‘Made To Move’ and ‘Dark Visions’; the latter closing the production, continue with the LA songstress’ signature soprano, painting the sublime soundscapes characterised by layered synths and grandiose textures.

Phidel takes the reins on the second track, ‘Zero’. The Londoner, whose background was musicless, having grown up in a house where music was strictly forbidden, had to fight for her passion, which resulted in the production of some fabulous pieces, which have been extensively used in television ads and various campaigns.

‘Keep On Dreaming’ sees the acclaimed Swiss band LUNIK’s songstress Jaël, whose spellbindingly clear vocals adorned productions by SCHILLER, MICH GERBER and DELERIUM once before. The Svensen and Gieler remix of ‘After All’ went to number one in the UK dance charts in 2003. 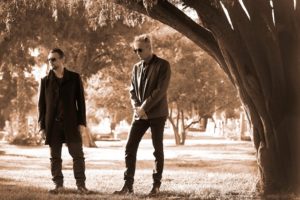 The New York born and LA based JES, co-wrote and lends her vocals to two pieces on ‘Mythologie’; ‘Stay’ and ‘Once In A Lifetime’. A well-known and celebrated producer and singer, a Grammy nominee and a host of her own radio show, the artist gracefully lifts the mood of ‘Stay’, which musically bears elements of Madonna’s ‘Frozen’. ‘Once In A Lifetime’ showcases the vocal abilities of JES over a perfect synth pop track.

‘Seven Gates Of Thebes’ is an instrumental gem, introducing ‘Ghost Requiem’ with Geri Soriano-Lightwood. The singer and songwriter of trip hop Supreme Beings Of Leisure characterises herself with the sultry vocal and seductive lyrics. The old record feel of this track resembles the productions by John Fryer on SILVER GHOST SHIMMER.

The last LA artist to collaborate on ‘ Mythologie ‘ is a vocalist and bass player Leah Randi. Randi is best known for playing bass in PINK’s band but she has previously collaborated with Leeb on FRONT LINE ASSEMBLY’s album ‘Civilisation’.

The two year period of completion for ‘Mythology’ pays off now. The album is wholesome, gratifying and wonderfully ethereal. Leeb’s use of various artists from three different countries, each with their own vision and incomparable vocal techniques, makes this collaboration a notable success. It truly is a production for the lovers of atmospheric, ambient and celestial music. And a very different style from FRONT LINE ASSEMBLY.

is released by Metropolis Records, available as a download from https://metropolisrecords.bandcamp.com/album/mythologie